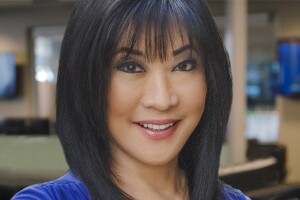 Kaity Tong, known for her professionalism, warmth, and quick wit, is one of the most popular local news anchors in the New York market. She anchors the Emmy Award- winning PIX 11 News at 5 and 10 on weekends.

Born in China, Kaity came to the United States with her family at age four. She grew up in Washington, D.C., and was inspired to become a journalist by her great-uncle, Hollington K. Tong, who was Ambassador to the U.S. from Nationalist China, as well as an acclaimed writer, and by her mother, who was a top broadcaster and producer for the Voice of America.

After graduating with honors on an academic scholarship from Bryn Mawr College with a BA in English Literature, Kaity had no clue what she wanted to do with her life, so she looked for the longest graduate program she could find, just to stay in school! Happily, she was accepted to Stanford University’s doctoral program in Chinese and Japanese studies.

It was while she was at Stanford that Kaity began her broadcasting career, by accident, getting what she thought would be just a summer job as morning editor and producer for KCBS All-News Radio in San Francisco.

The summer job turned into a year-long stint at the top all-news radio station in San Francisco. Kaity managed to complete her Masters in Asian Studies, but was sidetracked by the news business, and never completed her doctoral dissertation.

She began her television career as a reporter for KPIX-TV in San Francisco. Originally hired as a writer for the station, Kaity was asked to do an on-air test and was promoted on the spot to a street reporter, where her first report was on the “new” carts that carried people around the airport.

Shortly after that, Kaity was hired as the co-anchor of the number-one rated 5 p.m. and 10 p.m. newscasts on KCRA-TV, the NBC affiliate in Sacramento, CA. While at KCRA, her community service and involvement in local affairs was acknowledged by the United Way, the California State Legislature and the Sacramento City Council.

Two years later, Kaity was recruited by WABC-TV and moved to New York, where she began as a general correspondent and co-anchor of the “Weekend News Edition”, before co-anchoring the 5pm and 11pm newscasts. While at WABC, Kaity worked alongside news veterans Roger Grimsby, Bill Beutel and Tom Snyder.

After 10 years at WABC’s “Eyewitness News”, Kaity joined WPIX, where she co-anchored the 10 p.m. news for nearly 20 years.

Kaity joined Gloria Steinem and Beverly Sills in receiving the “Exceptional Achievement Award” from The Women’s Project and was the first woman honored by Rotary International with its “Paul Harris Fellowship.” She was also honored with a “Star” award by the New York Women’s Agenda.

A naturalized citizen, Kaity is especially proud to have received the Ellis Island Medal of Honor for her work. She was recently honored by the popular website, Fabulous Over Fifty.

She is actively involved with the Children’s Museum of Manhattan, the Juvenile Diabetes Foundation, the League for the Hard of Hearing, the China AIDS Fund, Plate to Plate, and Coalition for Asian American Children and Families, just to name a few.