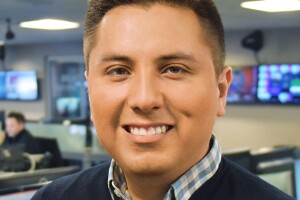 Cristian Benavides joined WPIX in July of 2018. He is a three-time Emmy Award winner and no stranger to New York City.

Cristian came to WPIX after spending nearly three years at WNJU, the Telemundo affiliate in New York, where he also contributed his reporting to WNBC.

He won a New York Emmy for his on-the-ground coverage during the 2016 Ecuador earthquake, which killed nearly 700 people and left thousands homeless. He also anchored a 30-minute nationally broadcast special, on the ground, three months after the earthquake struck.

More recently, Cristian went back to broadcast from Ecuador during that country’s presidential elections.

His other notable coverage includes Hurricane Matthew from Florida and the Woman’s FIFA World Cup from Vancouver, as well reporting on the border crisis in 2015 from Brownsville, Texas, for Telemundo and NBC stations.

Cristian graduated from the University of Miami with a degree in broadcasting. During his senior year, he was a White House intern. He was also a Stabile Fellow at the Columbia Journalism School.

Also, he loves tacos and a good story!