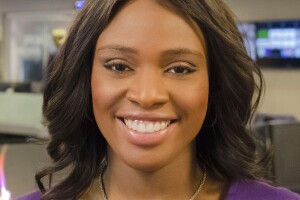 While at WPIX, Ayana was the first television journalist to cover Eric Garner’s police-involved death. In 2015 Ayana traveled to Haiti to report on recovery efforts, five years after the country’s devastating 7.0 magnitude earthquake. In 2017, Ayana was one of the first reporters on the ground as a terror attack unfolded along Manhattan’s West Side Highway.

Ayana joined WPIX after working for three years at WTIC-TV, the Fox station in Hartford, Connecticut. While at WTIC, Ayana covered the Sandy Hook School shooting, providing live reports from Newtown as events unfolded. She was nominated twice for an Emmy® Award for her work on special projects for the station.

Before joining WTIC, Ayana was a digital reporter and field producer for ABC News in New York where she covered major stories including; the Bernie Madoff case, Captain Sullenberger’s Miracle on the Hudson and the Deepwater Horizon oil spill.

Born and raised in Brooklyn, Ayana holds a Bachelor of Arts in Politics from Princeton University and is a graduate from the Chapin School in Manhattan.