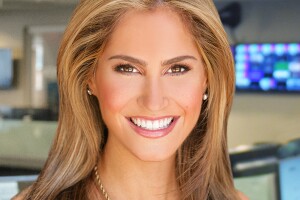 Andy Adler is the sports director and lead sports anchor for PIX11 and host of "One On One with Andy Adler" on Sunday nights.

Additionally, Andy hosts the pre-game shows for the Giants, Yankees, and Jets. You can also catch Andy on the YES Network, contributing to the Yankees and Nets broadcasts.

While at NBC, Andy hosted the popular weekly sports segment for "Prime Time News LA," a segment that gained notoriety for bringing out the personal side of some the biggest sports icons in the nation.

Andy also hosted the nightly live show, "Access SportsNet," which aired on the home of the Lakers, Spectrum SportsNet. Andy also got the opportunity to use her first language, Spanish, as a contributor on ’Spectrum Deportes Lakers.’

Before LA, Andy was a sports anchor and fill-in host of "Good Day New York" at WNYW, the Fox owned-and-operated station in New York. She also co-hosted the weekly series "Sports Extra" and was a field reporter for the Giants' post and pre-game shows at the station.

During her tenure with Fox, Andy covered the New York Giant's play-off run and victory of Super Bowl 42, serving as the field reporter from location.

While in New York, Andy also covered the Yankees’ 2009 World Series Championship. "Getting champagne thrown over my head in the Yankees locker room by Mariano Rivera will always be one of my favorite moments,” Andy says. She also co-hosted the MLB All-Star Game Special, hosted the New York City Triathlon and made appearances on Fox Business News.

Prior to being the sports anchor for Fox in New York, Andy served as host of “American Latino TV,” a nationally syndicated, weekly magazine program focusing on American and foreign-born Latinos making a positive impact in American society. “Few people know that my first language was actually Spanish,” Andy says. Simultaneously, she co-hosted the evening magazine show “Eye on the Desert” and reported for the 6 p.m.newscast at the CBS affiliate in Palm Springs, California.

Andy began her on-air broadcasting career at the age of 20 when she became a reporter for KSBW, the NBC affiliate located in the Monterey/Salinas market in California. She often made appearances on the NBC affiliate in San Francisco, as well.

Andy graduated with honors from Stanford University, where she served as News Director and anchor for the university’s television station, while also interning for the sports department at KPIX, the CBS affiliate in San Francisco.

During her years at Stanford, instead of graduating early, Andy took time off from school to move to New York and intern for ‘The Late Show with David Letterman.’

"I'm a fan of the sports fan. I love the passion and respect the loyalty," Andy says. "I'm driven by the stories behind just the X’s and O’s. Understanding what drives each player only make the games that much more fun to watch.”

You can often see Andy combining sports with her other major passion, being an advocate for children’s rights. At least once a month, you can catch Andy serving as an emcee for various children's charity events, including the Children's Health Fund and the World of Children.