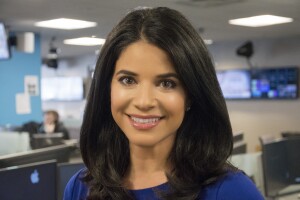 Rebecca Solomon is a reporter with WPIX.

Before working in the Big Apple, the award winning journalist spent four years with News 12 Westchester, where she often reported about school problems in the Hudson Valley, including financial woes, safety and security.

Prior to News 12, Rebecca worked in various markets as an anchor and reporter, including in her hometown market, Harrisburg/York, Pennsylvania. Here, she was nominated for an Emmy stemming from a three part series about a Holocaust survivor who built a strong relationship with the man who liberated him from Dachau.

Rebecca’s career launched in the Wisconsin northwoods, where she shot, wrote and edited her own work in often sub-zero temperatures.

Rebecca is a graduate of Indiana University’s Ernie Pyle School of Journalism.

She’s living out her dream each day, as an enthusiastic storyteller who prides herself on having a voice for others.

When Rebecca’s not working, you can find her at the gym, in her kitchen trying new recipes, reading a good novel or visiting new places around the world. She’s often seen at the theater exploring new shows on Broadway.

Rebecca’s rescue dog, Rizzo, is a huge part of her life. She is a big advocate for animal rescue groups and shelters.

Rebecca is a board member of Paws Crossed Animal Shelter and she is active in Westchester’s Walk to End Alzheimer’s.

Rebecca is beyond thrilled to be sharing her passion with the WPIX family and its viewers.

Follow Rebecca on social media, and next time you see her, be sure to say hello!