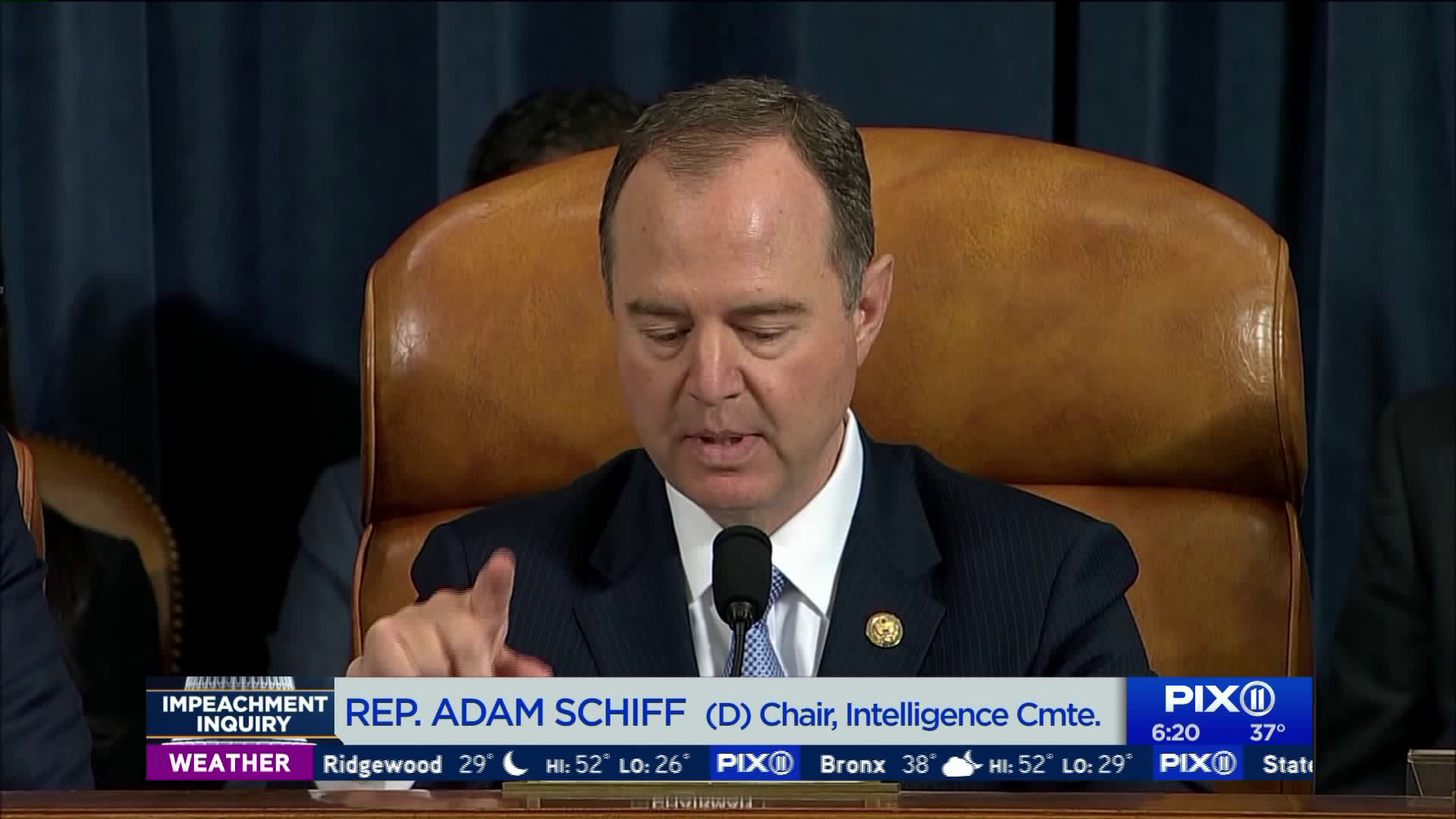 Kirstin Cole reports as another day of testimony is set to kick off.

In a televised impeachment hearing Friday, the US ambassador to Ukraine that the President ousted for apparently thwarting his rogue foreign policy scheme, may prove him right.

Democrats called for the foreign service veteran's testimony to lift the lid on what they say is a black diplomatic operation set up to push Trump's political goals rather than America's interests and to churn up dirt on former Vice President Joe Biden.

And Yovanovitch may not be the only bad news for the President. In a potentially significant development on Thursday evening, a lawyer for career Office of Management and Budget official Mark Sandy said her client would appear for a deposition on Saturday if he was subpoenaed.

Sandy could provide insight into whether the budget office acted on the President's orders in withholding military aid to Ukraine -- ostensibly in order to draw political concessions from the government.

Yovanovitch's testimony could become a key piece in an indictment of Trump's character, his willingness to infringe the guardrails of his office and ultimately to abuse his power that Democrats are putting at the center of their bid to oust him from office. Sharpening their case, House Speaker Nancy Pelosi on Thursday claimed the evidence shows that Trump committed bribery by withholding military aid from Ukraine to get dirt on Biden.

After decades of behind-the-scenes service before her career was destroyed, Yovanovitch will be used as a human example of what critics say is the cost of Trump's ruthless, self-centered leadership.

And the name Rudy Giuliani is also going to be ringing in everybody's ears.

Yovanovitch said in a deposition to the House Intelligence committee that officials in Kiev and Washington told her that she was being targeted by the President's personal lawyer.

Giuliani's activity in Ukraine forms a crucial plank of the impeachment case since Democrats see him as the battering ram who paved the way for Trump's pressure on the Kiev government.

Witnesses have testified that the President's fixation with a conspiracy theory that Ukraine, not Russia, interfered in the 2016 election was fanned by his personal lawyer. Giuliani spent months claiming Biden and his son Hunter were guilty of corruption in Ukraine in a campaign amplified by conservative pundits. There is no evidence of wrongdoing by the Biden or his son -- who was on the board of the Ukranian energy giant Burisma.

Yovanovitch is crucial to the Democrats' goal of painting a picture of a vain, out-of-control President abusing his power and bypassing established US diplomatic channels.

For instance, when she asked a colleague, US Ambassador to the European Union Gordon Sondland, how to save her job she said he advised her to tweet praise of the President.

Yovanovitch also testified that amid a personal campaign against her she was told by a superior in April to get "on the next plane home" because there was nervousness about her in the White House and State Department and possible concerns about her security.

She follows two old school US diplomats -- George Kent and Bill Taylor, who opened televised hearings Wednesday by suggesting that Trump was motivated by getting dirt on Biden -- a potential 2020 Democratic rival.

Like them, she may be accused of Trump's supporters of being part of a "politicized bureaucracy" that disdains Trump and wants to usurp his power and thwart his "America First" policy.

Democrats will try to get Yovanovitch to explain her comment that she felt threatened by the President himself, after it emerged that he told Ukraine's leader that she was "bad news" and was "going to go through some things."

They may also seek an on-camera soundbite based on her comment that she was "incredulous that the US government chose to remove an ambassador based, as best as I can tell, on unfounded and false claims by people with clearly questionable motives."

Democratic counsel or lawmakers may also use Friday's hearing to explore her belief that she may have been removed specifically because her fight against corruption threatened Giuliani's now indicted associates, Lev Parnas and Igor Fruman.

Such testimony will undermine one of Trump's top talking points -- that he withheld $400 million in security aid to Ukraine as it battles pro-Russian separatists because he was concerned about corruption.

In reality, according to Yovanovitch, Giuliani was dealing with people in Kiev who opposed her own anti-corruption crusade -- including fired prosecutor Yuri Lutsenko.

Republicans will argue -- correctly -- that a President has the right to fire anyone he wants. And they say her dismissal means she knows nothing about more recent events in Ukraine.

"You are going to hear a lot from Democrats tomorrow about Rudy Giuliani and none of it justifies anything close to impeachment," Trump's campaign said in a statement Thursday.

Pelosi racheted up her own rhetoric on Thursday, charging that Trump engaged in "bribery."

The terminology is a more easily understandable than the Latin phrase "quid pro quo," which means "something for something." And bribery is one of the offenses for which the Founding Fathers prescribed impeachment, along with treason and other high crimes and misdemeanors.

The political positioning is the latest twist in the battle for public opinion that could seal the fate of Trump's presidency being waged by both sides ahead of a likely full House impeachment vote by the end of the year.

Republicans are trying to repair the damage from Wednesday's first hearing, which appeared to unveil a direct link between the President and a bid to pressure the Kiev government. Taylor confided that one of his aides heard a call between Sondland and Trump the day after the President's now notorious July 25 chat with Ukrainian President Vlodymyr Zelensky.

Trump, according to Taylor, asked Sondland about the "investigations" that he had asked his counterpart to begin, after asking him for a "favor."

White House counselor Kellyanne Conway told CNN's Wolf Blitzer on Thursday that there was "nothing new" in testimony that represented the first public disclosure of the call.

She also claimed, inaccurately, that hearsay would not be sufficient for the evidence to be admitted in a court of law.

The circumstances of the call may not be hearsay for much longer in any case. Sondland, a Republican mega donor has been called to testify in public next week. He may have to choose between protecting his own legal position or the President.

And David Holmes, the Taylor aide who heard the call in a Kiev restaurant -- in circumstances that raise serious security concerns -- will give a private deposition on the impeachment investigation on Friday.

But the top Republican in the House, California Rep. Kevin McCarthy said Thursday that the testimony so far actually proved that there was no offense worthy of impeachment.

He claimed that the rough transcript of Trump's call with Zelensky -- that appears to show pressure for an investigation by the President -- in fact clears him.

"Nothing is there that's impeachable, and we should not be putting our country through this. We're less than one year away from an election," he said.

Thursday night, Trump tweeted calls for Democrats to apologize to the nation.

Democrats must apologize to USA: Ukrainian Foreign Minister Vadym Prystaiko said that “United States Ambassador Gordon Sondland did NOT link financial military assistance to a request for Ukraine to open up an investigation into former V.P. Joe Biden & his son, Hunter Biden.....

....Ambassador Sondland did not tell us, and certainly did not tell me, about a connection between the assistance and the investigation.” THE FAKE IMPEACHMENT INQUIRY IS NOW DEAD!