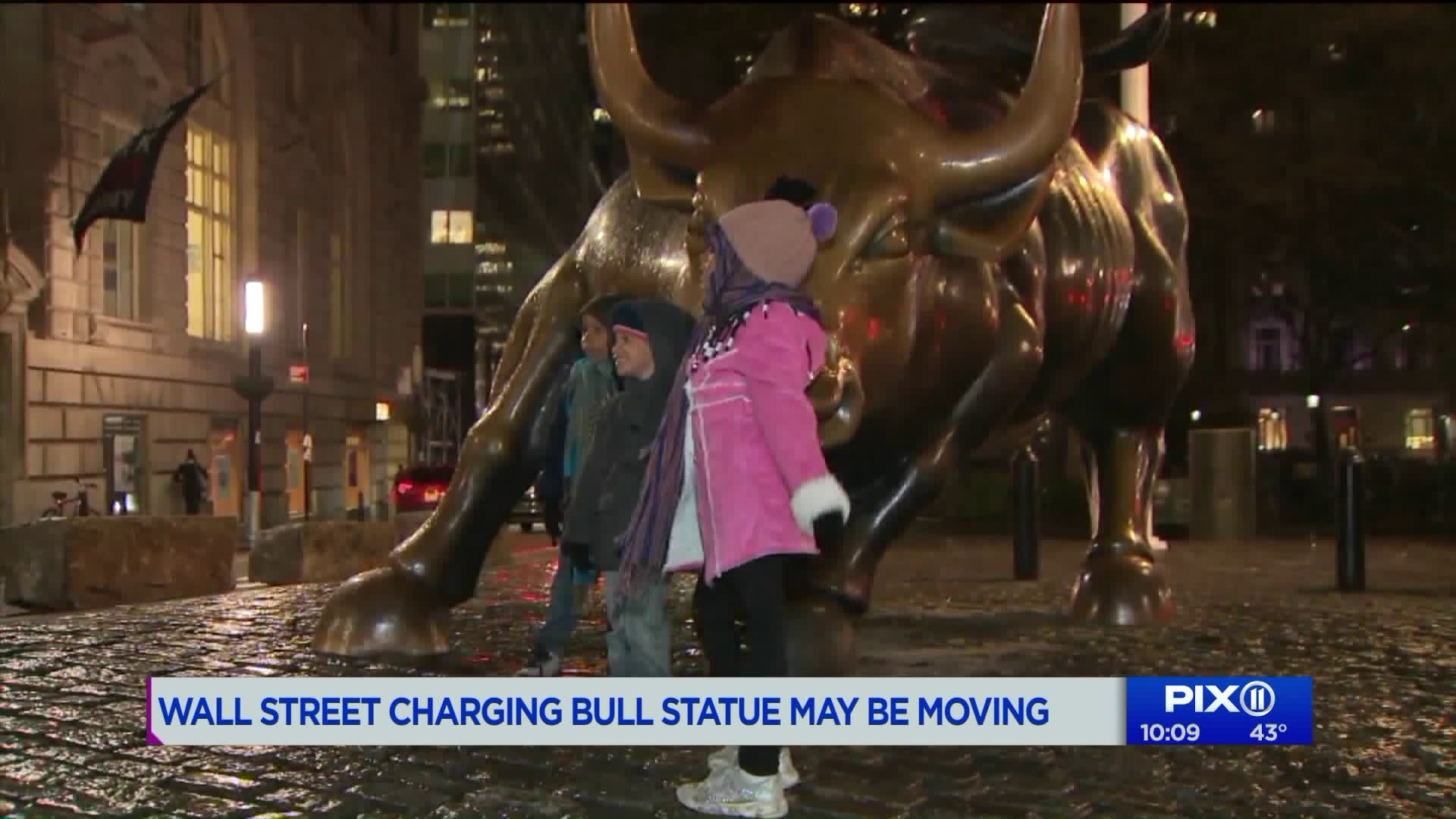 The iconic Charging Bull sculpture has sat in the plaza in Bowling Green since 1989, but now there are reports the City wants to move it to a new location outside the New York Stock Exchange.

BOWLING GREEN, Manhattan — The iconic Charging Bull sculpture has sat in the plaza in Bowling Green since 1989, but now there are reports the City wants to move it to a new location outside the New York Stock Exchange.

”This is all about this mayor being a friend of the rich and the famous,” alleged Arthur Piccolo, chairman of the Bowling Green Association and a good friend and representative of Arturo Di Modica, the artist who gifted the bull to the city.

“[The email said] 'we have to move your bull. There is a dangerous condition at Bowling Green.' I’m saying, what dangerous condition? I look out my window and at the same time he’s getting this email, DOT is showing up creating this weird road right in front of the Charging Bull,” Piccolo said.

The Charging Bull in Manhattan's Financial District was vandalized and smashed with a metal banjo, police said.

A man is accused of bashing the statue with a metal object and damaging one of its horn in September and climate protestors did douse the statue with fake blood in October.

Visitors of all ages from all around the world stop to snap photos as they strike a pose next to the imposing bronze beast.

Piccolo is contending the city - in order to move the bull - created a safety hazard by removing the protective area around the sight. He says the one side, previously closed to vehicular traffic is now opened to it.

”It was done for one reason, to create a justification to move the Bull from Bowling Green,” said Piccolo. “Since 1989, I would estimate tens of millions of people, not one accident here, not one problem, what we have proven is this is the perfect place for Charging Bull.”

PIX11 reached out to City Hall. They have not responded. Piccolo is also disputing their argument that the bull is a potential terrorist target and, therefore, needs to be moved. He said the Stock Exchange would be a more high-risk location.

“You don’t need a vehicle. Any jerk with a backpack full of explosives can as well. It makes him (the bull) more inviting because not only do you have the New York Stock Exchange, you have these two symbols side-by-side,” said Piccolo. “There are a lot of high-risk locations, are they moving all those locations, are they moving anything of value that’s in those locations away?”

With the area to the side of the bull now open, our cameras caught vehicles zipping by all evening and confused visitors stopping mid-step.

Piccolo issued a challenge to the mayor.

“Mayor de Blasio, come down here, debate the future of Charging Bull in public next week — just you and me,” said Piccolo.

Piccolo also argues the city can order the statue off a public street, but doesn’t have the authority to move it to a specific spot without documentation and discussion with the artist De Modica.

Di Modica is expected to return to town Friday. Piccolo says the artist will issue a statement against moving the bull.

This Dec. 20, the Charging Bull will celebrate 30 years at this very spot in the same location since 1989.