Flavored vape ban expected to pass city council, opponents say it could be a deadly decision 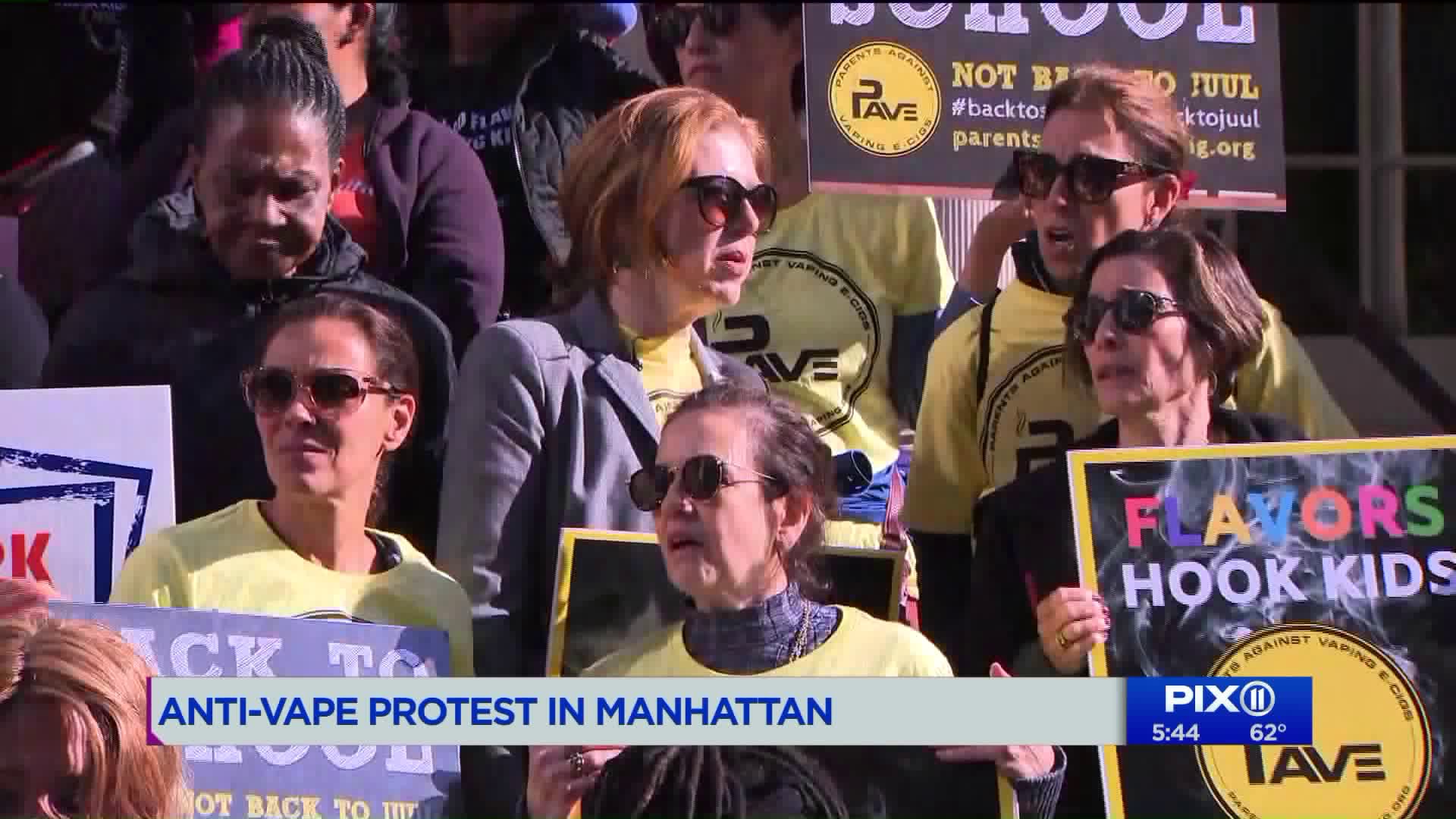 All menthol cigarettes, as well all flavored e-cigarettes and vapes, would be banned from sale in New York City if a city council proposal becomes law. Its sponsors expect it to pass before the year is over, and vape retailers in particular say it will put them out of business, and in the process, endanger people`s health.

LOWER MANHATTAN — All menthol cigarettes, as well all flavored e-cigarettes and vapes, would be banned from sale in New York City if a city council proposal becomes law. Its sponsors expect it to pass before the year is over, and vape retailers in particular say it will put them out of business, and in the process, endanger people's health.

The proposed ban was the centerpiece of a rally on the steps of City Hall on Tuesday morning, at which a variety of groups, including the American Heart Association, and students from the Touro College of Osteopathic Medicine, gathered to show support.

"Flavors hook kids," said city council member Mark Levine, the sponsor of the new legislation. "Whether it's e-cigarettes or tobacco, we've got to get the flavored products of all these nicotine delivery systems off the shelves of New York City," he told PIX11 News.

His proposed legislation, which already has the backing of a majority of city council members, as well as Speaker Corey Johnson, is designed to end situations like those that PTA member Dorothy Pena said she sees at her daughter's school.

"The seventh and eighth graders that are walking away, as soon as they come out of the school," Pena said, after the rally, "they're taking out the vape pens."

Also at the rally at City Hall were counter protesters. The handful of them said they represent "hundreds of thousands" of New Yorkers who vape, particularly those who are former cigarette smokers.

"A lot of them depend specifically on a flavored [vaping] product," said Spike Babaian, a director of the New York State Vapor Association, and the owner of a chain of vaping stores. "This is going to send them right back" to smoking cigarettes, she told PIX11 News.

Some vape users, like Sam Davam, who was entering a vaping retailer in Midtown when he spoke with PIX11 News on Tuesday afternoon, said that the word among his friends who've switched from cigarettes to vapes and e-cigarettes was consistent with what the counter protesters had said.

"If they do ban the flavors in e-cigarettes," Davam told PIX11 News, "they'll just go back to cigarettes."

As for him, said Davam, "I don't like to say, but I'd probably go back to smoking cigarettes."

At least 29 Americans have died from vaping related illnesses. According to the Centers for Disease Control, most of those deaths were from illegally made vaping cartridges containing the marijuana-related substance THC.

As Babaian pointed out, those types of vaping or e-cig devices are not what's sold in licensed shops like hers. She gave PIX11 News a tour of one of her stores, VapeNY East Harlem, in which she showed that she carries dozens of flavors of e-cig cartridges.

Under the proposed legislation, only one flavor, tobacco, would be allowed to be sold. She said that would eliminate more than 90 percent of her business, forcing her to close her shops.

As an alternative, she said, her advocacy organization, the New York State Vaping Association, had proposed other changes to current vaping and e-cig laws.

"Only allow the product to be sold in establishments" that sell to people 21 and over, she said. They'd also proposed requiring depictions of "cartoons and food on the packaging" to be eliminated, among a variety of proposals to make flavored e-cigarettes and vapes less attractive to children.

"All those amendments were shot down," Babaian said.

Council member Levine said that he expects the citywide ban to become law "well before" the year is over.

Babaian said that the proposed city legislation, in conjunction with a statewide ban that's currently being litigated in court, would put her out of business possibly as early as Nov. 1, unless judges rule against both the city and the state proposed bans.