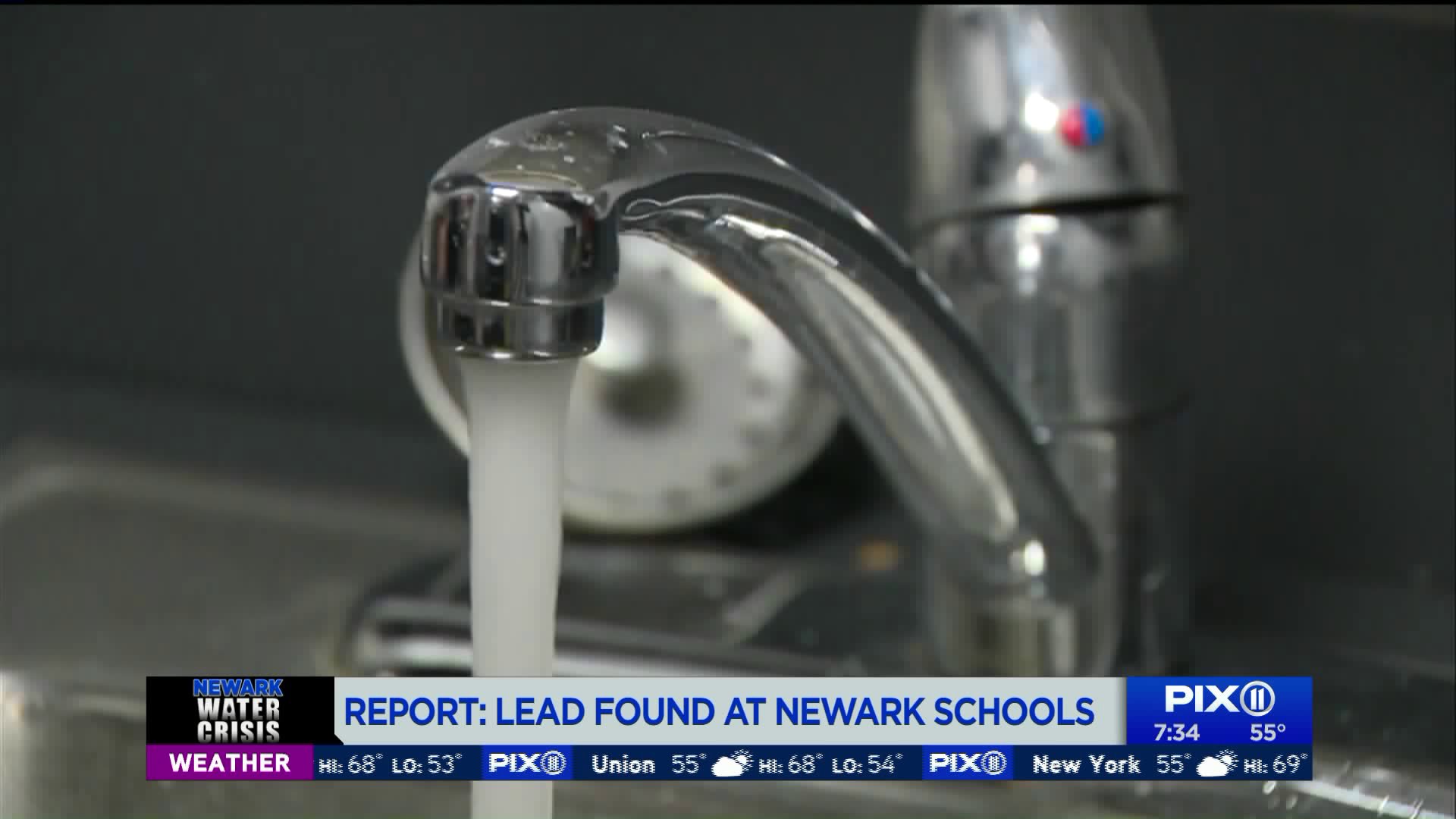 As NJ Gov. Phil Murphy is set to outline a "comprehensive strategy" on lead contamination in the state, new reports suggest that schools in Newark had lead levels higher than the standard level in their water system. 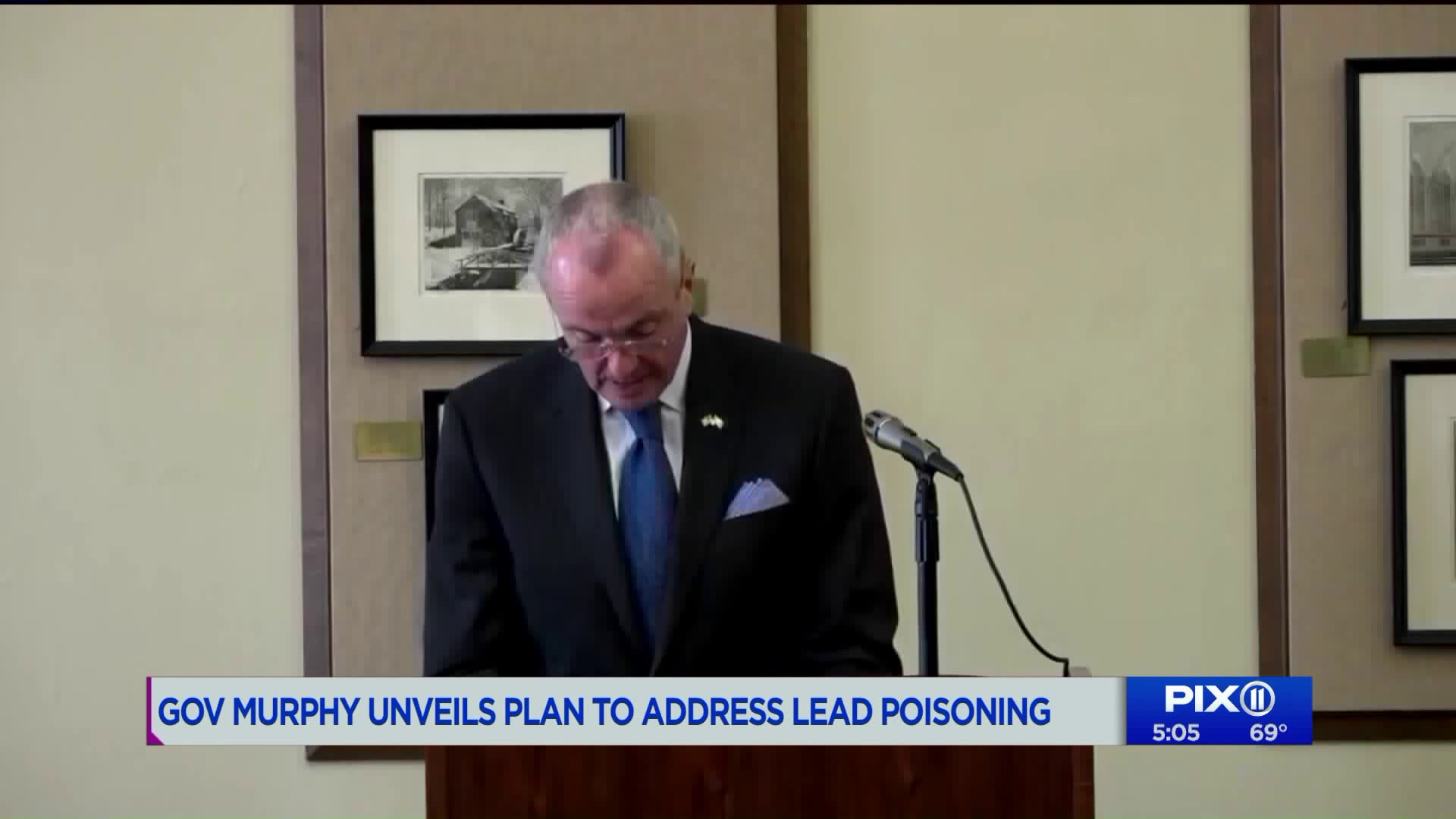 People wait in line for bottled water at a recreation center on August 13, 2019 in Newark, New Jersey. Residents of Newark, the largest city in New Jersey, are to receive free water after lead was found in the tap water. It was reported over the weekend that lead levels in some areas of the city were still not safe and the city has begun distributing bottled water for cooking and drinking. (Spencer Platt/Getty Images)

TRENTON, N.J. — New Jersey Democratic Gov. Phil Murphy on Thursday called for borrowing $500 million to pay for the removal of lead paint in homes and the replacement of thousands of lead pipes across the state as part of a "comprehensive strategy" aimed at addressing the public health concern.

Murphy unveiled his plan at Thomas Edison State University, alongside a group called Jersey Water Works that unveiled its own set of recommendations Thursday, including replacing all lead pipes over 10 years.

"New Jersey must move forward with a truly comprehensive and whole-of-government approach to removing the danger of lead from our communities," he said. "And we will."

Murphy's plan comes two months after the state's biggest city, Newark, announced that some of the filters it had handed out failed and lead was located in drinking water. Since then the city has begun replacing about 18,000 of its lead service lines, pipes leading from water mains to residences, financed by a $120 million bond taken on by Essex County.

It's unclear how much of the work the $500 million would cover since estimates suggested replacing the state's lead pipes could cost up to $2 billion, and the price tag has been a primary hurdle to replacement in the past.

But Murphy said he expects that $500 million would suffice because of money already available for the Department of Environmental Protection. Murphy also said that privately owned water companies in the state could pay for their share of the work through rate increases.

For the plan to work, though, voters must first approve the $500 million in new debt. Murphy said he hopes the question would be on the ballot next year.

Murphy's plan also would add New Jersey to the list of a handful of states that require or do voluntary lead pipe inventories. He is also seeking to inventory lead paint as part of his plan. He said he would also require his Cabinet to come up with a lead testing strategy, which would then be made public.

After his speech, he said yes when asked if school-age children would be required to be tested before starting school, though it's unclear when that would commence.

The plan also reflects regulations he proposed earlier this week affecting schools: he's asking schools to increase the frequency of testing for lead in the water from every six years to three years, and for the Department of Education to come up with a database to make test results public.

"The governor in his proposals today shows he doesn't see the sense of urgency in the lead crisis, especially as it's affecting our children," he said. "It could take three to five years before we see one dollar getting out, meantime children will still be impacted by lead."

How many lead pipes New Jersey has is a mystery. A 2016 American Water Works Association study suggested there were over 300,000 such pipes.

Earlier this month, public records from a state lead pipe inventory started this year and obtained by The Associated Press showed the state has about 160,000 lead pipes.

But that number was incomplete because it included some partial results from about three-quarters of the state's nearly 600 water systems. Officials have said they expect the number to rise.

The focus on lead comes after recent testing of Newark's city-issued filters showed up to 99% are effective. The city is also scaling back distribution of bottled water this week.

Last spring, Newark switched the chemicals it was using to prevent lead from leaching out of pipes after tests showed the prior treatment was failing.

Jersey Water Works describes itself as a collaborative among nonprofit groups and some private companies aimed at addressing New Jersey's water infrastructure problems. In addition to replacing lead services lines over 10 years, the group's recommendations include calling for a statewide public awareness campaign about lead and authorizing utilities to raise rates for pipe replacements.