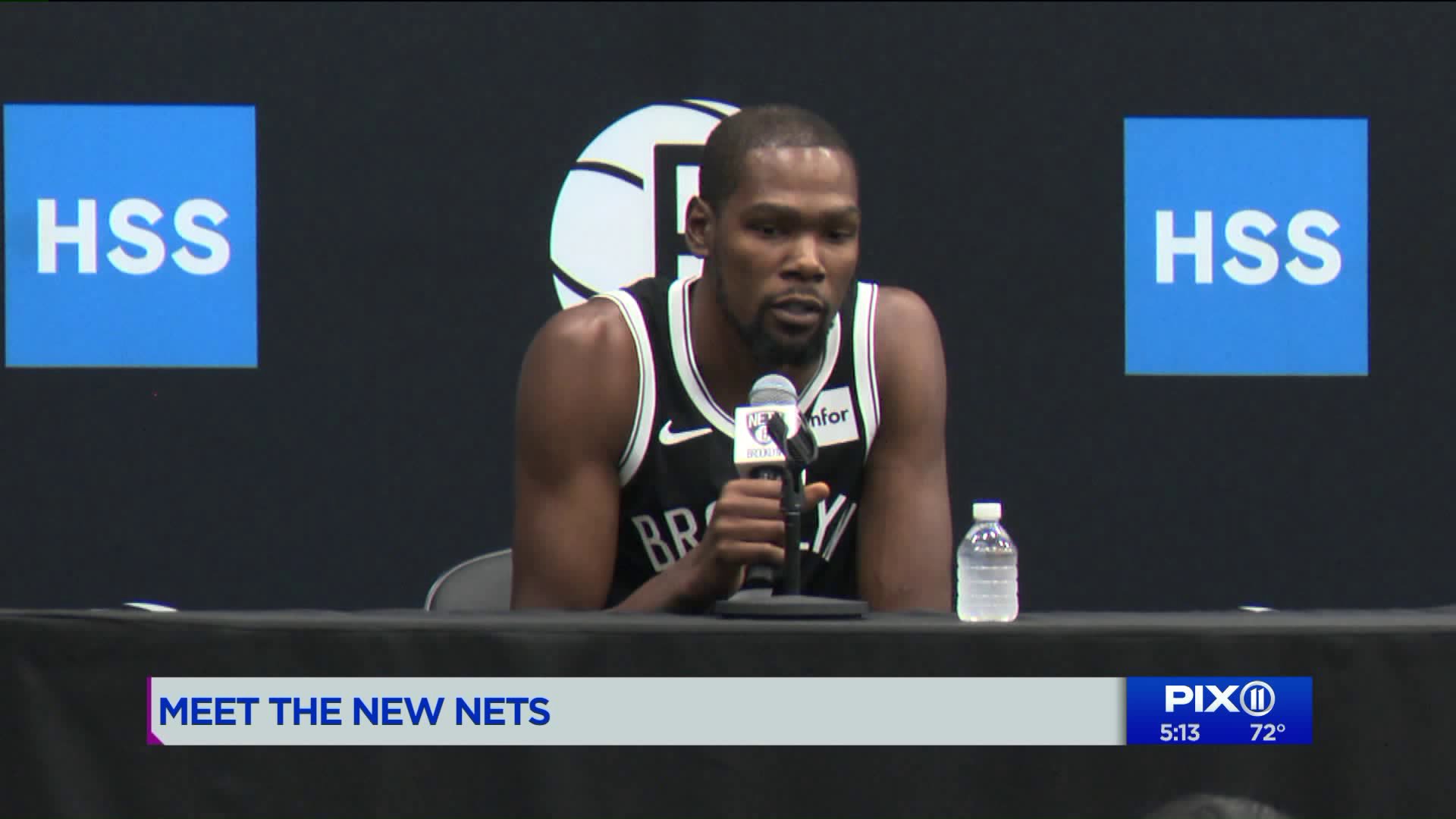 The much-hyped Brooklyn Nets held their media day to launch their 2019-20 season. PIX11`s Joue Mauceri was there.

NEW YORK — Kyrie Irving won't allow anyone to rush Kevin Durant back to the court this time.

Irving said Friday that Durant wasn't ready to play when he returned in the NBA Finals, where he was quickly injured again. Irving said his new teammate's health wasn't valued enough, and that won't be the case now that they are together on the Brooklyn Nets.

"We all know K was not ready to play in that environment. We all know that, whether people want to admit it or not," Irving said. "He was out 31 days and we put him on the national stage in the finals to end up selling a product that came before the person, Kevin. And now, I'm here to protect that."

Durant injured a calf playing for Golden State during the second round of the playoffs and missed a little more than a month before returning for Game 5 of the NBA Finals in Toronto. He lasted just 12 minutes before going down with a ruptured Achilles tendon that required surgery.

The Nets expect Durant to miss the season, though Durant said he makes his own decisions.

Durant hasn't said he felt pressured to return, even though the Warriors were down 3-1 and facing elimination. But Irving believes he was, saying a lot of people were responsible for what happened during the fieriest remarks by either All-Star on the day.

Irving knows there will be plenty of questions about when Durant will suit up for the Nets, just as there were throughout the first four games of the NBA Finals.

"I'm going to be the protector of that all throughout the year," Irving said.

And extreme caution will be part of that.

"I'm very patient," Irving said. "I'll be overpatient with Kevin because I don't want anything like that to happen to anyone again, especially on that type of stage where it happened and him having to answer questions about whether he's coming back or not."

Other notes from the Nets' media day:

Durant, Irving and DeAndre Jordan were all teammates on the 2016 U.S. Olympic team who became close friends and discussed playing together. They were on the phone together in the early hours of June 30 — Irving recalled it being 4:16 a.m. — when they made their decision to all sign in Brooklyn.

"We were just like, 'Are we ready to do it?' and everybody was like, 'Yeah,'" Durant said. "I mean, it was really that simple. I try to think of something deeper but it really was that simple."

Durant said there wasn't much that went into his decision to leave Golden State after three seasons.

"I felt like it was a time for a change and I wanted to play for a new team and simply put I just did it," he said.

Jordan finished last season with the New York Knicks before deciding to move across town. Asked about his talks with Durant and Irving, and his eventual decision, he joked about it being boring compared to a previous one in free agency.

"I mean, it wasn't as exciting as me getting locked in my house a few years ago," Jordan said.

He was referring to the summer of 2015, when he verbally agreed to join the Dallas Mavericks, only to change his mind when former teammates from the Los Angeles Clippers came to his home in Houston and eventually persuaded him to remain with them.

Irving said last fall he planned to re-sign in Boston when he became a free agent. He said things started to change soon after, following the death of his grandfather, causing him to not even think about basketball. Irving, who grew up in New Jersey, where the Nets played before moving to Brooklyn, eventually decided he wanted to return home.

The Nets signed veteran forward Lance Thomas, who spent the last 4 ½ seasons with the Knicks. They have question marks at forward, where Durant is out, Wilson Chandler is suspended the first 25 games of the season for a positive drug test, and Rodions Kurucs was arrested over the summer for allegedly assaulting his former girlfriend in his apartment.

The Nets lost in the first round of the playoffs last season. It's hard to predict how far they can go this time without knowing whether Durant can play. They insist, however, they can do well even without him.

"We don't want to wait. We want to go now," Jordan said. "This isn't a practice season or a trial season."