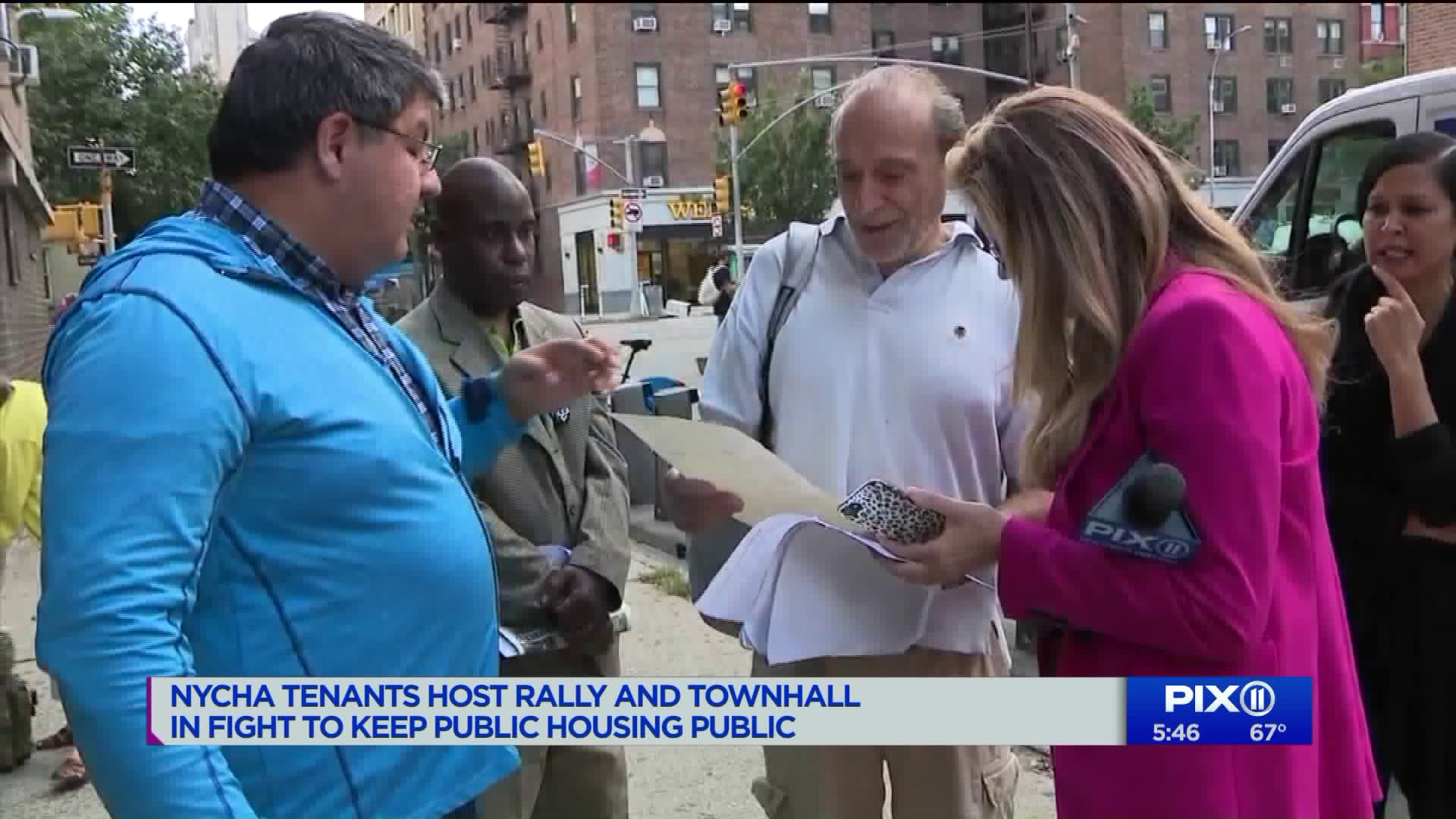 The city is going ahead with the plan to create a public private partnership to fix NYCHA, but one group of residents in Chelsea say they are starting their own fight to keep public housing public.

CHELSEA, Manhattan — The city is going ahead with the plan to create a public/private partnership to fix NYCHA, but one group of residents in Chelsea say they are starting their own fight to keep public housing public.

A group called Fight for NYCHA held a town hall Wednesday night in Chelsea at PS 33, where over 200 people packed the auditorium.

The tenants are opposed to RAD — Rental Assistance Demonstration — a program that turns over management and repairs of public housing to private developers. It has people like Vera Naseva, who lives in the Chelsea Houses, saying "RAD is bad."

“How else are we coming up with the money? There is no other plan on the table,” said Miguel Acevedo, the Fulton Houses Tenant Association president. Acevedo is for a public/private partnership to fix NYCHA.

The cost to fix NYCHA is estimated to be about $32 billion. Mayor Bill de Blasio has introduced a plan called NYCHA 2.0, which RAD is a big part of, to create a new and improved NYCHA.

The plan could raise about $24 billion to fix public housing. Acevedo says it’s the best plan right now. But Roberto Rodriguez, who also lives in the Fulton Houses in Chelsea, says he fears once private developers come in, they would squeeze NCHA tenants like him out.

“There is no plan that I know of that would replace every one of those apartments which is a very cruel and inhumane thing to do,” said Rodriguez. He says right now developers are bidding on the process to demolish and convert two out of the 11 buildings at his development and bring in a private landlord.

Rodriguez says Wednesday's town hall is to help mobilize residents to stop that from happening. A handful of activists and tenants say they believe the city and state can come up with the money.

“We are going to eliminate some tax abatements and increase taxes on the wealthy,” said Louis Flores, a member of a Fight for NYCHA.

“RAD should be a last resort, not a first resort,” said Marni Halasa, a member of Fight for nycha.

“In the face of $32 billion in capital needs for repairs citywide after decades of federal disinvestment, there is no other plan that will bring this level of funding, renovations and repairs to improve living conditions for public housing residents," a NYCHA spokesperson told PIX11.

"For the Chelsea campuses alone, there is a $344 million repair need and drastic changes are needed to fund repairs to our aging buildings. NYCHA is focused on raising the needed capital to address our developments’ immediate needs, and to fund, maintain and preserve public housing for generations.”