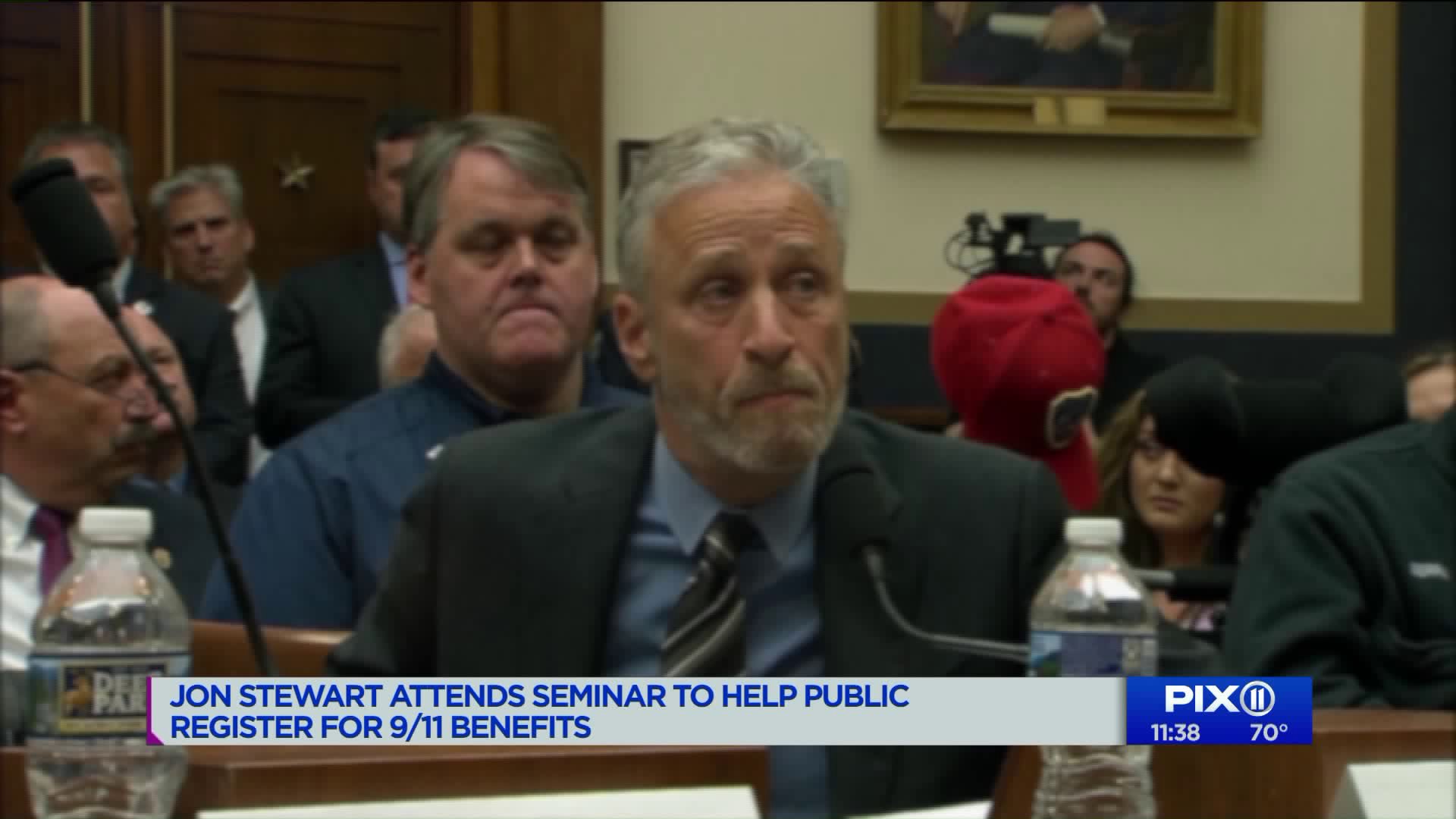 Comedian and activist Jon Stewart led a 9/11 informational session this evening at BMCC.

The packed audience inside the auditorium was made up of mostly students, teachers and residents of Lower Manhattan who were in the area during the terror attacks and the toxic aftermath.

Stewart is largely credited with pushing lawmakers into extending funding for the 9/11 Victim Compensation Fund until the year 2090. But the humble Stewart wants none of the credit — What he wants is people to take action.

"Please, I urge you access what you are owed, access the programs that exist to help you," Stewart told the crowd.

While first responders have been the face of 9/11 related illnesses, advocates want the government to remember residents, students, educators, and people who worked in office buildings and schools are as well. They're urging those individuals to apply for free healthcare and compensation.

"I'm constantly using a pump, I have breathing issues, a lot of headaches and it even affects me physically," Brooklyn resident Linda Gavin tells PIX11.

She was a student at BMCC when the toxic cleanup was underway. Her then infant child was in a daycare in the area. Her daughter is now 19. Both are sick. For years, Gavin has been paying out-of-pocket, costly medical care.

"At the time, I had a little daughter that was at the school and we have the same symptoms," said Gavin. Gavin is precisely one of the countless people advocates are trying to get the word out to. Gavin, like so many others, may be eligible for either the WTC Health Program or the 9/11 Victim Compensation Fund. She is being urged to apply.

"My law firm alone represents 137 students and teachers with cancer and it shouldn't surprise us they were breathing the same toxic dust as the firefighters and police officers," said Barasch. "Of course they have the same illnesses but they don't realize they're entitled to the benefits."

What Barasch wants to point out is people who inhaled the toxic air may have moved to other parts of the country and that's one reason advocates are trying to get the word out.

"Call your friends living out of town ask how's your health, do you have cancer," said Barasch. "You're entitled to compensation and you don't realize it."

Barasch also says if someone has died from a 9/11 related illness, their spouse is still entitled to file a claim.

About 40,000 students were exposed to the toxic dust. 19,000 of them public school students, one of them is Lila Nordstrom. She was 17 and a Stuyvesant H.S. senior when the towers came down. Now living in California, she founded StuyHealth, an organization that focuses on informing an alumni population of the benefits, an alumni population that is spread out across the country.

Nordstrom herself suffers from respiratory illnesses. She has heard of too many classmates with cancer or acid reflux or other respiratory issues. She faults the government for saying the air was safe.