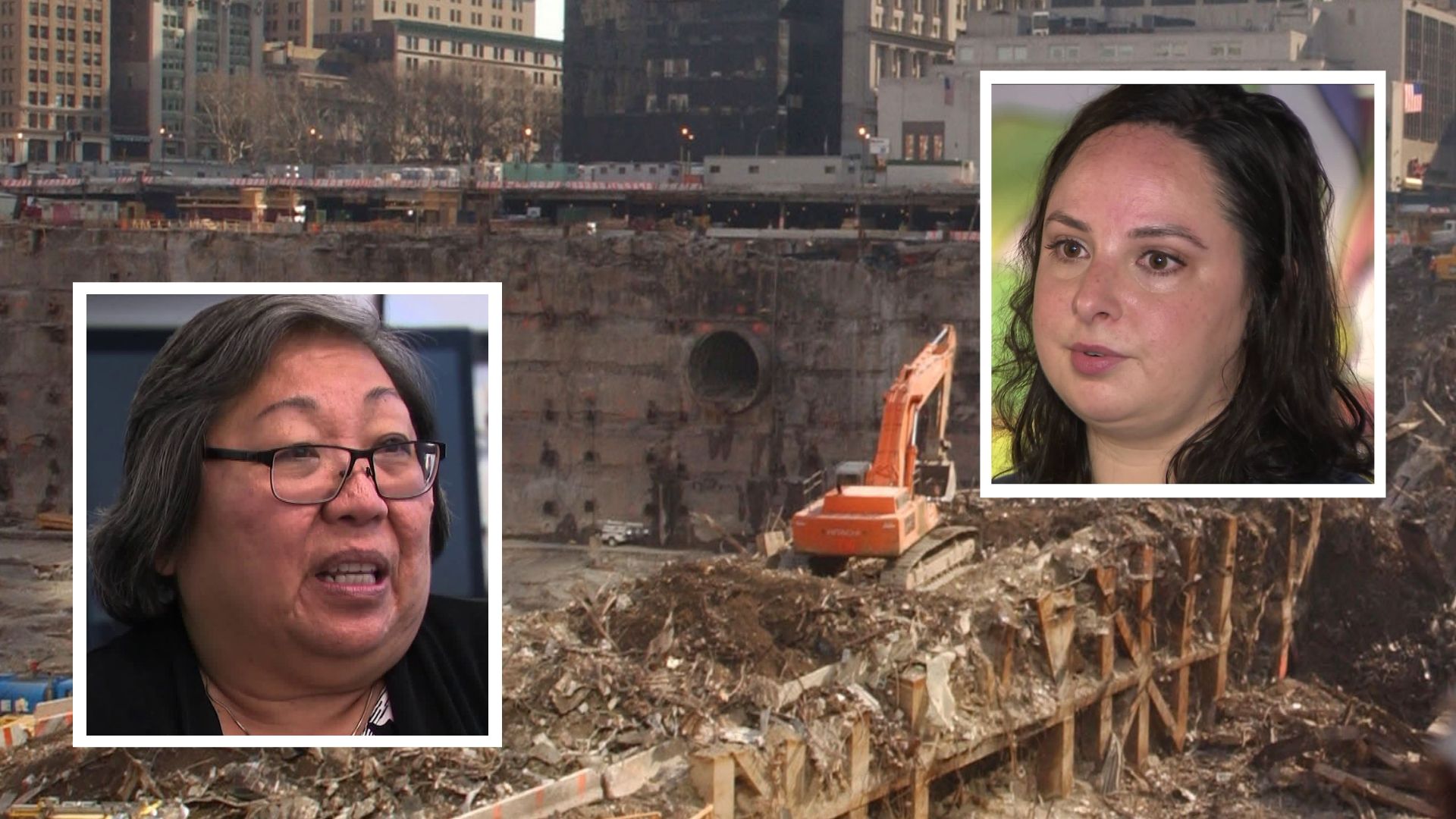 Professor Yvonne Phang was teaching at the Borough of Manhattan Community College on September 11, 2001, while Shoshana Dornhelm was a 15-year-old sophomore at Stuyvesant High School. They both remember watching the attack on the World Trade Center and remember the smells and sights for the weeks and months after. Years later, both women battled cancer due to their exposure to 9/11 toxins and debris.

NEW YORK — Even though Professor Yvonne Phang recalls the "very awful, acrid smell" that wafted into her college classroom and the "eerie haze" she'd see under klieg lights while Ground Zero was being cleaned up, the educator wasn't expecting "any kind of physical consequences" in the years after the September 11 attacks caused the Twin Towers to collapse.

Phang was teaching accounting on the sixth floor of the Borough of Manhattan Community College in the immediate months after 9/11 at the main campus on Chambers and West Street.

She was right in the toxic zone.

In October 2017, more than 16 years after terrorists flew planes into the towers, Professor Phang received a breast cancer diagnosis.

But Phang told us she was more concerned about the possible loss of income because she had already used up her sick days in 2017 to have a knee replacement.

She couldn’t survive, she said, with no cash flow from her job.

“To me, that would represent a fate worse than death,” the professor said.

That’s when her colleagues at BMCC stepped forward and did something incredibly generous.

“Twenty faculty and staff, some I don’t even know, donated ‘leave:’ a total of 200 days,” Professor Phang told PIX11.

“It took the weight off my shoulder,” Phang said. “They gave me the gift of time, which is what I needed.”

Professor Phang told us her treatments lasted nine months. She was able to return to teaching at BMCC.

About a year later, a friend was driving when she heard a radio ad about the September 11th Victim Compensation Fund.

“I was overjoyed to learn I could qualify,” Phang said. “I did not have a clue before that. I didn’t even hear of the Zadroga Act passed in 2011.”

“They were exposed to the same toxic dust as the firefighters and the police officers,” Barasch said to PIX11 about teachers and students in lower Manhattan.

The Zadroga Act was recently extended 72 years. Barasch said it’s important for any of the 400,000 people who worked, lived or attended school downtown in the toxic zone to register with the World Trade Center Health program now so they can get documentation proving they were near the scene in the months after the attacks.

“I provided class schedules that showed which room I was in,” Professor Phang said. “It satisfied the requirements for the number of hours I was exposed.”

Shoshana Dornhelm was only 15, a sophomore at Stuyvesant High School, when she was late for history class the Tuesday morning of the 9/11 attacks.

She had to run from the 10th floor to the second at the Chambers Street school for gifted students.

“Everybody was gathered around the windows,” Dornhelm recalled. “As soon as I went to the window to look, the second plane hit and there was a huge explosion.”

In the chaos of the eventual evacuation that followed, Dornhelm remembered “white powder” covering hundreds of people running north on West Street.

Dornhelm was back at Stuyvesant by Oct. 9, with the EPA assuring teachers and students and downtown residents the air was safe.

She later graduated from Binghamton University upstate after majoring in psychology and math.

When she was 29, nearly 15 years after the terror attacks, Dornhelm “noticed my neck was swelling up, the lymph nodes.”

This was in January 2016. By April, a doctor had diagnosed Dornhelm with Hodgkin’s lymphoma.

She needed six rounds of chemo for a cancer that’s considered highly curable.

“Emotionally, it was a lot harder, to be honest,” Dornhelm said. “It really put a dent in my life, a roadblock, moving forward.”

A year after she filled out applications with the World Trade Center Health Program, her illness was certified as 9/11-related.

She will be eligible to receive a benefit from the Victim Compensation Fund.

“I feel I have that safety net should something come later on,” Dornhelm said.

In terms of the cancer, “I consider myself completely recovered, so I’m happy for that,” she said. “It’s something I never would have expected to happen at my age.”

Dornhelm and Professor Phang are both encouraging the people who lived or worked or attended school downtown to register with the program.

Dornhelm said she doesn’t want to focus on any anger she may feel, because government officials said the air in lower Manhattan was safe after 9/11.

She does struggle with a form of PTSD.

“It’s an anxiety, an ‘undercurrent’ that I feel,” Dornhelm said. “I’m kind of still working through that.”

For anyone interested in registering, contact the World Trade Center Health Program or the Victim Compensation Fund. You can also reach out to INFO@STUDENTSOF911.ORG.