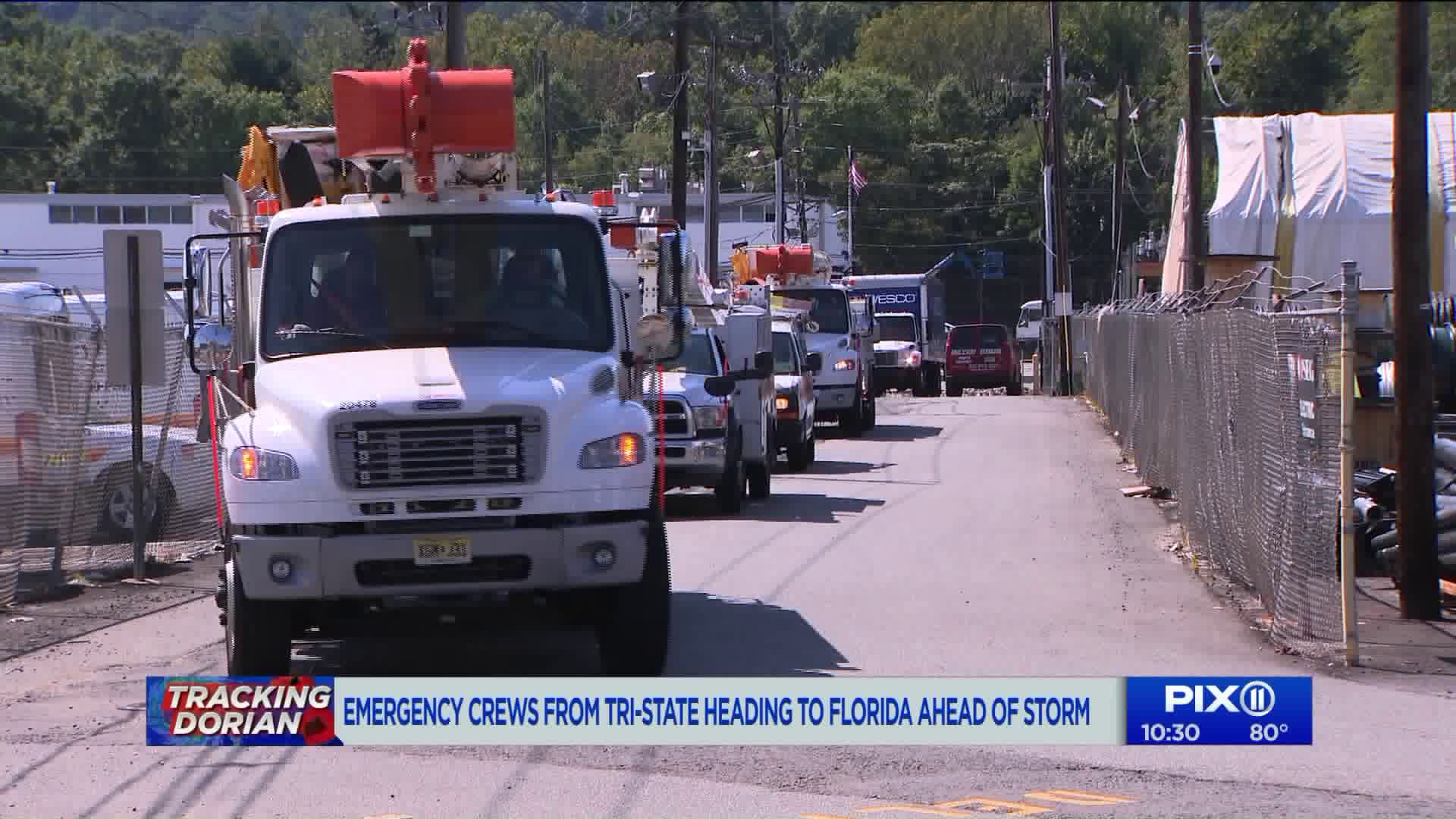 Teams from both New York and New Jersey are headed to Florida to assist with those in Florida as Hurricane Dorian heads to the Sunshine State. 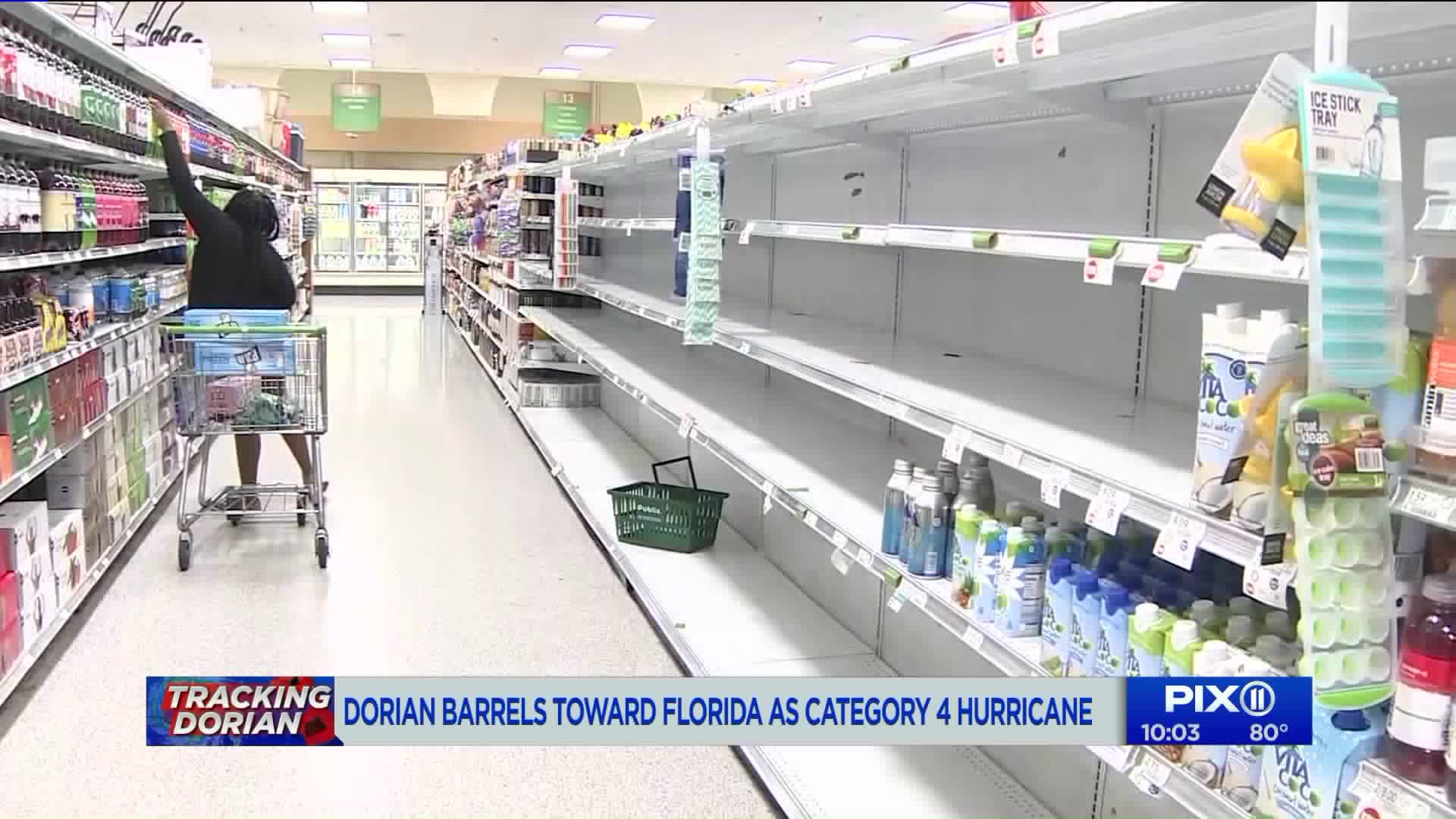 The center’s latest alert is based on reports from hurricane hunter aircraft flown by the National Oceanic and Atmospheric Administration.

As a result of Dorian’s power, all of Florida is under a state of emergency and authorities are urging residents to stockpile a week’s worth of food and supplies, with the governor warning that the storm could be a “multi-day” event.

“It’s going to impact the entirety of Florida, and residents need to be prepared,” Acting Federal Emergency Management Agency Administrator Pete Gaynor said Friday morning on CNN. “So, take the time now … to understand what your local risk is.”

“The clock is ticking right now,” he added. “Don’t waste time. Prepare yourself and your family.”

President Donald Trump said he will attend a briefing Sunday at FEMA headquarters in Washington at 12:30 p.m. ET. He said the briefing will be roughly 24 hours before storm is expected to hit, and they will likely make decisions about whether to evacuate parts of Florida then.

Trump said in a video posted to Twitter that Dorian looks like it “can be an absolute monster.”

"We're ready, we have the best people in the world ready," he said in the video. "All indications are it's going to hit very hard and it's going to be very big. Somebody said bigger, or at least as big, as (Hurricane) Andrew."

Deborah Thomas, 69, was preparing for the storm Friday at a Home Depot in West Palm Beach when she broke down in tears with worry over how her dog and her pigs would survive the storm.

"I live in a mobile home, so I stand to be homeless," she told CNN. "But that is not what worries me. I have animals. I can replace my home, but I can't replace my animals."

Dorian is due to slow its forward speed in the coming days, allowing it to gain intensity over warm Caribbean waters and fuel the heavy rains, damaging wind and storm surge it's expected to deliver, CNN meteorologist Derek Van Dam said.

In the meantime, Dorian is expected to "remain an extremely dangerous major hurricane," the center said, with potentially "life-threatening storm surge" as high as 10 to 15 feet above normal tide levels.

It is then forecast to roar toward the US mainland Monday evening into Tuesday morning at major-hurricane strength, though experts warn that forecasts are subject to change.

Regardless, residents across the state should be prepared, CNN meteorologist Allison Chinchar said. "We've been saying 'all of Florida' for a reason."

As of Friday afternoon, the storm's track indicated a landfall could occur somewhere in the southern half of Florida, Chinchar said.

"But that could change," she warned, "as well as the landfall time, which right now is still looking at late Monday night into early Tuesday morning."

Another question is when the storm will deviate from its current northwest track and shift north, Chinchar said. That shift in direction could indicate what kind of impact, if any, will be seen along Florida's west coast and in the Panhandle.

"There's still a lot of questions there, but the fact remains — the potential is still there," Chinchar said. "So, you need to plan accordingly."

Florida residents are stocking up

The governor had previously declared a state of emergency for all 67 Florida counties. The state has 819,000 gallons of water and 1.8 million meals ready for distribution, he said Thursday.

Local officials throughout the state are making decisions Friday about whether to issue evacuation orders, DeSantis said in a Friday morning news conference.

"We are just asking Floridians, please heed those directives from your local folks," he said, adding, "Those decisions are not made lightly."

Florida's Highway Patrol will begin escorting fuel trucks to boost the volume that can be brought into the state, DeSantis said Friday. Service and truck rates for fuel trucks also have been waived.

About 2,000 National Guard troops will be mobilized Friday, Maj. Gen. James Eifert said in the news conference. That number could double by the end of Saturday, he said.

"We're prepared to respond," Eifert said. "We have 12,000 soldiers and airmen in the state and every one of them that is able and in the state, not deployed, will be ready to step up as needed."

Florida residents have been stocking up on gas and food for a stormy weekend, and officials are urging everyone to be prepared.

"Get water, get gas, get cash out of the ATMs," West Palm Beach Mayor Keith James said. "The more we hear about this storm, it sounds like a serious one."

Thomas, who was fretting over her beloved pets, plans to hole up with her dog at her daughter's home, where they've stocked plenty of water, she told CNN. Even if evacuation orders come down, Thomas doesn't plan to leave, she said, even though Dorian has her mind on Hurricane Andrew in 1992, which left Homestead, Florida, looking like an atomic bomb had gone off.

With Dorian scheduled to arrive in time for Labor Day, major airlines have offered waivers for flights to Florida, Georgia and the Caribbean. Officials with the Greater Orlando Aviation Authority announced that Orlando International Airport would cease operations Monday at 2 a.m.

"We usually get hundreds of visitors every day, and it's just been one of those days that drives everyone away. It's a gorgeous day but the hurricane is just going to kill it all," Jason Pun, owner of a Cocoa Beach restaurant, told the station.

"It is taking a little bit of a hindrance, especially when we're supposed to be preparing for one of our busiest weekends of the year," Frank Figueroa, owner of the neighboring Sandbar, said.

"This is going to be a big storm. We're prepared for a big response," he said.

Since Dorian had minimal impact on Puerto Rico, the agency is shifting staff from the island to Florida in preparation.

Dorian already has claimed the title of strongest storm so far of this year's Atlantic hurricane season.

If it reaches Florida, this will be the fourth year in a row a hurricane of any strength has hit the state. That would be the most years in a row since the 1940s.

Dorian is on track to be the strongest hurricane to strike Florida's east coast since Hurricane Andrew in 1992, CNN meteorologist Brandon Miller said.

To avoid damage from Dorian, the US Navy is moving more than 40 planes from Jacksonville to bases in Michigan, Ohio and Texas.

Florida State University had been scheduled to play its season-opening game off campus, in Jacksonville near the Atlantic coast. Because of Dorian, the game has been moved farther inland to FSU's normal home field in Tallahassee.

Because Dorian could impact Florida's Kennedy Space Center, NASA has said it will have a crawler-transporter move NASA's mobile launcher Friday from launch pad 39B to the Vehicle Assembly Building about 3.5 miles away. The launcher was being tested on the pad in anticipation of future Space Launch System missions.