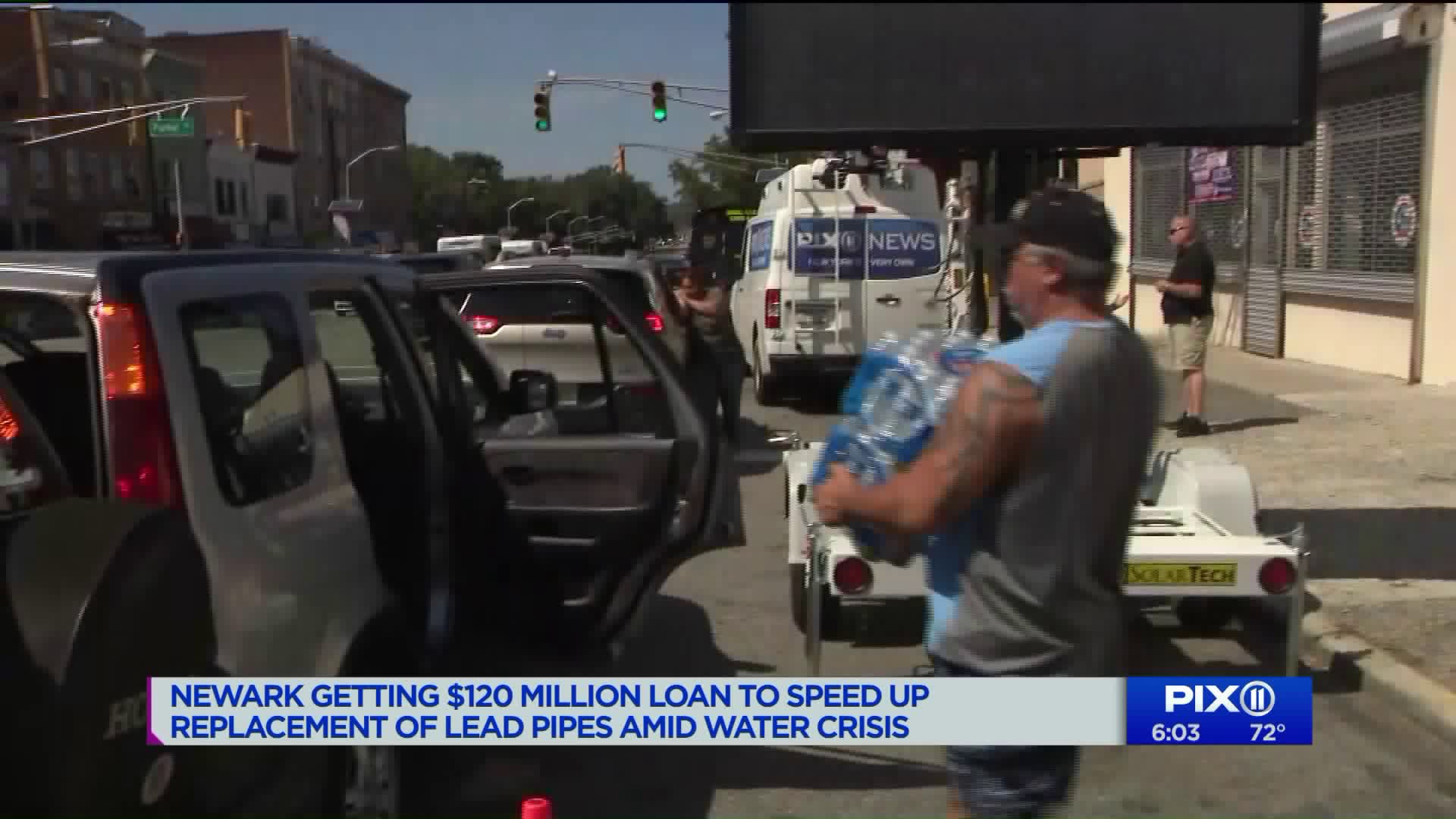 New Jersey`s biggest city on Monday announced a plan to borrow $120 million to dramatically cut the time it will take to replace pipes causing elevated lead levels in drinking water.

NEWARK — It's a crisis here, but lead in the drinking water may become a thing of the past if a recently struck deal announced on Monday gets approved, and if it works effectively in the timeframe that's forecasted.

That's a lot to expect, but all of the parties involved claim that it will take care of the problem.

What the key players in the deal -- Mayor Ras Baraka of Newark, County Executive Joseph DiVincenzo of Essex County, and New Jersey Governor Phil Murphy -- won't say is how the loan that they helped to negotiate will get repaid.

"The Essex County Improvement Authority will lend the City of Newark $120 million," DiVincenzo said at a news conference on Monday morning, in which he and other political leaders made the official announcement. "The city can use [the loan] only for the pipe replacement program," the county executive continued.

He was referring to a plan by the city of Newark to replace 18,000 water pipes, called service lines, that are made of lead. The heavy metal leaches into water that passes through it, and can cause a variety of health problems, including brain damage in children and fetuses.

Newark has already replaced about 800 pipes, and was on course to complete the work in approximately 10 years. The $120 million loan will allow New Jersey's largest city to speed up the process, its proponents said. They estimate that with the additional funding, the project can be completed in 24 to 30 months, or about two to two and-a-half years.

The timeline had skeptics among residents at a bottled water distribution center on Bloomfield Avenue here. It's one of a handful of locations citywide where cases of free bottled water are being handed out by the city in the wake of testing that it's done on water samples taken in Newark homes.

In at least two of three homes tested for lead in the drinking water earlier this summer, the results showed lead levels above the EPA limit. The measurements came in spite of the fact that the samples were from homes that were among thousands to which the city had distributed lead-screening water filters.

"At least they have a plan, and they're moving forward, and something's actually been getting done," said Vivian Vargas, a resident in Newark's North Ward. The problem has "been going on for years," she said.

Like Vargas, residents who spoke with PIX11 News did not blame the mayor for the crisis. Instead, they said, he'd inherited a problem that's plagued the city for years.

However, they were skeptical about a key comment that Mayor Baraka made during the news conference announcing the deal.

"We are not going to raise taxes for the residents of this city," he said, in answer to a reporter's question. "We're actually working on something right now" as a way to pay for it," Baraka said, but he added that he would not reveal any details as yet.

"They have to find a way to get that money back," Carlos D'Oleo, a Newark resident, told PIX11 News. "How they gonna find [the money]?" he asked. "Taxes gonna be the answer."

Everybody who spoke with PIX11 News about the issue said they were convinced that somehow, taxpayers were going to get stuck with the bill.

One report indicates that the loan will be repaid over 30 years. Each year, Newark will be expected to pay $6.2 million, or $186 million, or 155 percent of the loan.

$120 million is the same amount of money the federal government provided for Flint, Michigan to deal with its problem of lead in the water.

The local member of Congress here, Donald Payne, said that he was in contact with Michigan congressional members get guidance on how to secure federal funds that would repay the loan.

The Newark City Council, as well as the boards of Essex County freeholders, and the Essex County Improvement Authority are expected to vote on the deal on Tuesday.