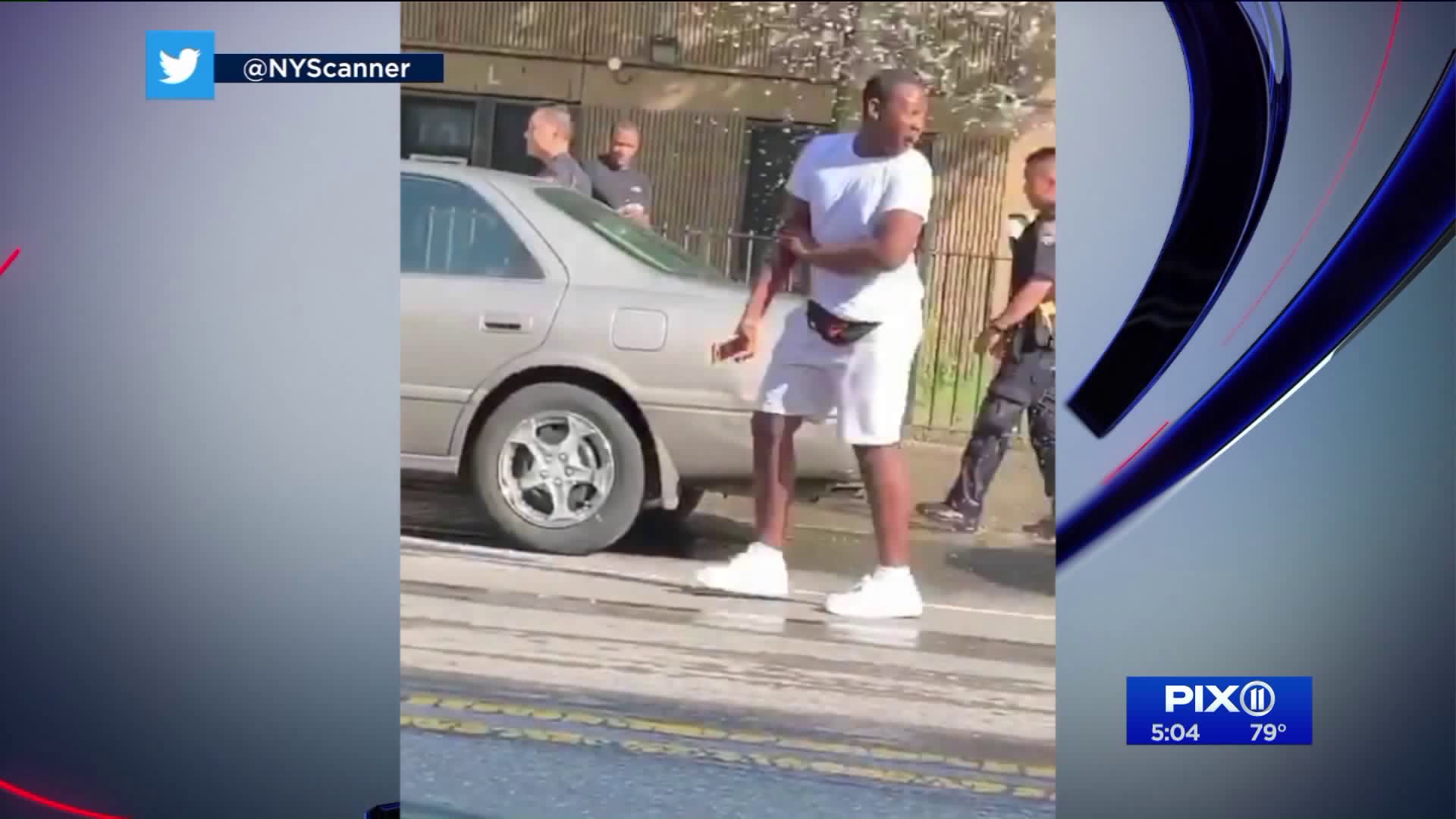 Three people have been arrested in two separate incidents of on-duty New York police officers being doused with buckets of water in Harlem and Brooklyn, according to law enforcement sources.

NEW YORK — Three people have been arrested in two separate incidents of on-duty New York police officers being doused with buckets of water in Harlem and Brooklyn, according to law enforcement sources.

The NYPD confirmed Wednesday they had arrested a 28-year-old man in connection with the incident, identifying him as a known gang member.

The incident was one of two seen in viral cellphone video footage that went viral earlier this week and sparked outrage among law enforcement.

UPDATE: The individual wanted for dumping a bucket of water on an NYPD police officer in Brooklyn has been APPREHENDED. pic.twitter.com/1o4ZCXpGfW

In video of the Harlem incident, officers are seen handcuffing a man on the hood of a sedan while about five other men circle the group.

The men toss water on the arresting officers from buckets. At one point, a shirtless man behind the officers winds up and throws an empty red bucket. After it bounces off the head of the officer closest to the camera, the crowd jeers.

The NYPD issued a release Tuesday evening saying the officer who was hit with the bucket "suffered pain and swelling to the back of his head."

The release asked for the public's help identifying three men wanted for questioning in connection to the Harlem incident.

Scott, 23, and Boden are accused of damaging a woman's cellphone with water during the incident. Sources say they could face charges related to that, not wetting or injuring the officer.

In a second video, two officers, already visibly wet, are seen walking away from a conversation with individuals who are obscured by a parked car in Brooklyn. Splashes of water follow them from off camera as laughter is heard in the background.

As they cross the street, a young man runs up and pours an entire bucket of water on one officer. The two policemen never break stride.

Behind the camera, a woman can be heard laughing and saying, "Oh [the police] came over to talk to them and they violated, they violated them."

"Look," she says later, "They're laughing at them!"

The video, posted to Instagram, had over 20,000 views on Tuesday. It isn't clear what day the Brooklyn incident occurred.

'That ain't all right'

The officers in Harlem were responding to reports of a disorderly group when they saw someone they recognized with an outstanding warrant, Monahan told his fellow officers. As chief of department, Monahan supervises uniformed patrol commanders and is the NYPD's highest-ranked uniformed member.

"As they're making that arrest, there are a couple of guys who thought it was all right to throw water and a bucket at the cops," he said. "Well, that ain't all right."

The officers called for backup and the group scattered, Monahan said.

In the Brooklyn incident, the officers were walking away from a call when they were attacked with water, Monahan said. He then criticized the officer, who continued walking away after being doused.

"Any cop who thinks that that's all right, that they can walk away from something like that, maybe should reconsider whether or not this is the profession for them," he said to applause. "We don't take that."

A senior NYPD official told CNN the police involved in the videos "should have taken action and they'll be reprimanded for not doing so."

In an internal memo obtained by CNN, the department outlined how officers should react when involved in incidents, such as being doused with water while on duty.

It says if an officer is injured from spraying they can charge the individual with "assault in the second degree."

The memo also states that police officers, while expected to endure a higher level of offensive language, are not expected to tolerate conduct that may cause risk of injury to themselves or the public, or that interferes with their duties.

"The NYPD kept New Yorkers safe through the heatwave and last night's outages," he wrote. "We won't tolerate this kind of disrespect."

He identified the first video as taking place in the 28th Precinct in the Harlem section of Manhattan and said the department is investigating.

The New York City Police Benevolent Association, for its part, has placed blame for the incident squarely on politicians.

"The NYPD is now frozen," PBA President Patrick Lynch said in a statement. "Disorder controls the streets, and our elected leaders refuse to allow us to take them back."

"As police officers we need to draw a line," he continued. "In situations like this, we need to take action to protect ourselves and the public."