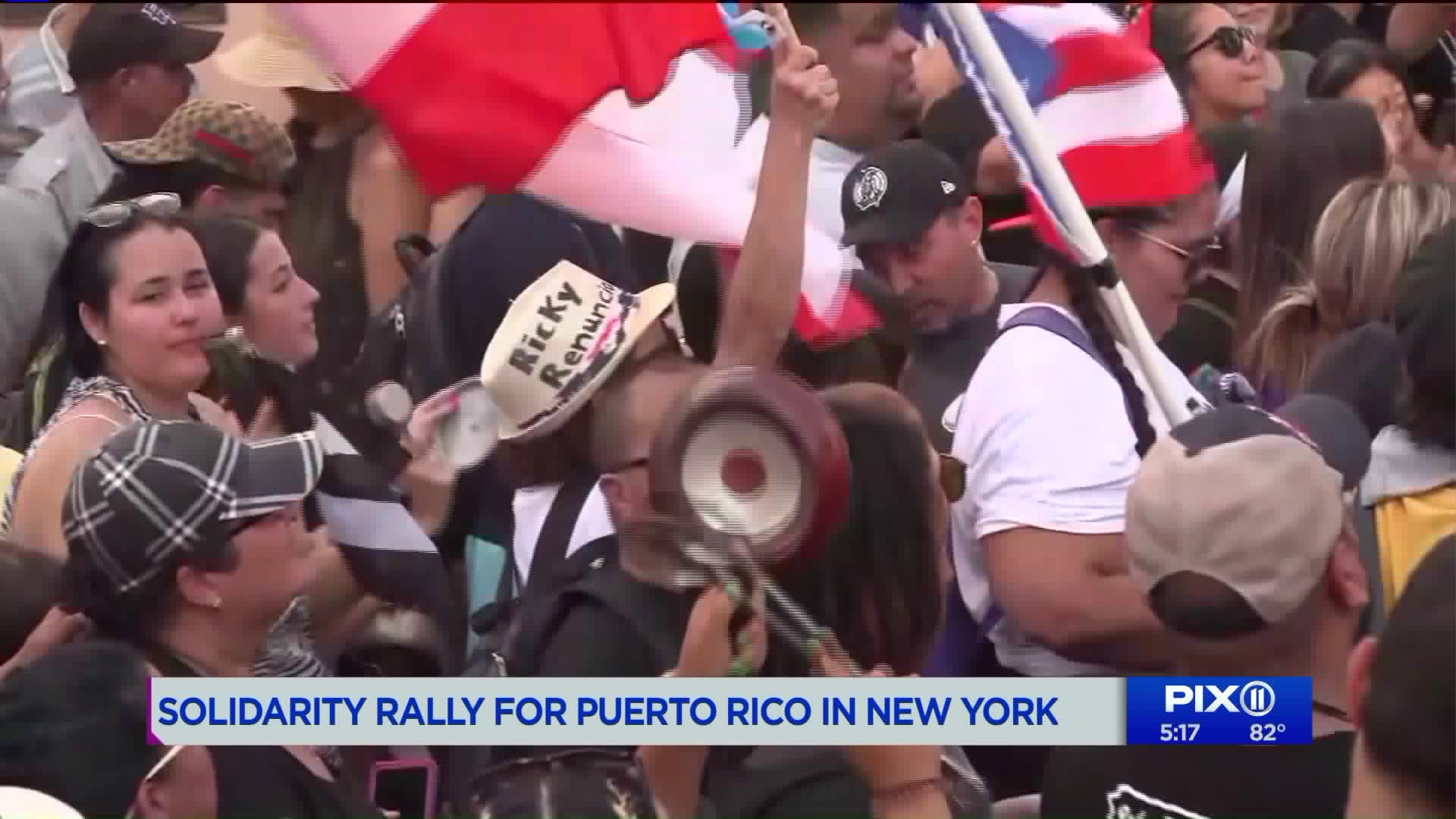 The protest came 10 days after the leak of 889 pages of online chats in which Gov. Ricardo Rossell and some of his close aides insulted women and mocked constituents, including victims of Hurricane Maria. 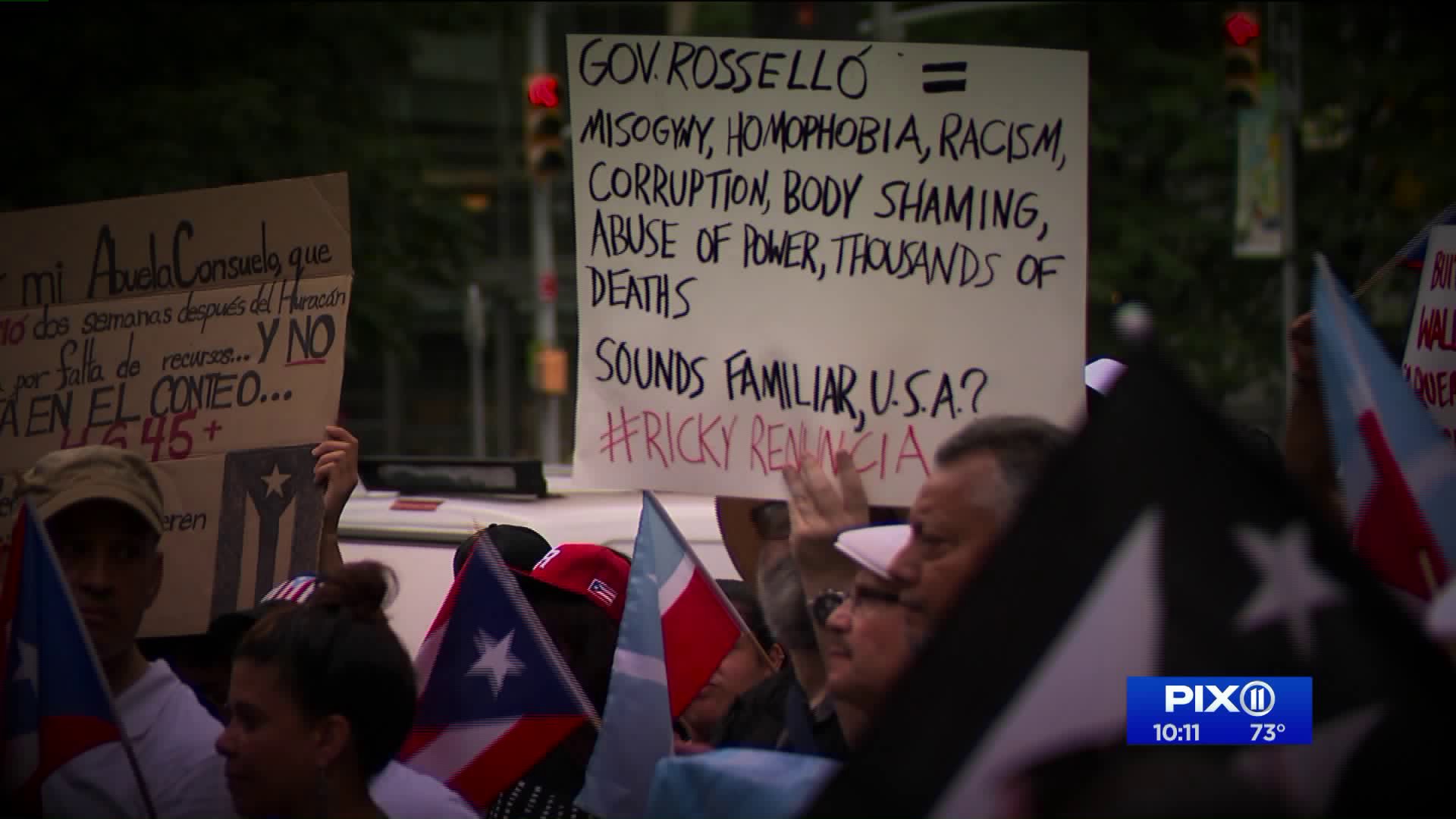 SAN JUAN, Puerto Rico  — Waving flags, chanting and banging pots and pans, tens of thousands of Puerto Ricans jammed a highway Monday to demand the resignation of Gov. Ricardo Rosselló in a crisis triggered by a leak of offensive, obscenity-laden chat messages between him and his advisers.

The demonstration appeared to be the biggest protest on the island in nearly two decades.

"Finally, the government's mask has fallen," said Jannice Rivera, a 43-year-old mechanical engineer who lives in Houston but was born and raised in Puerto Rico and flew in to join the crowds.

The protest came 10 days after the leak of 889 pages of online chats in which Rosselló and some of his close aides insulted women and mocked constituents, including victims of Hurricane Maria.

The leak has intensified long-smoldering anger in the U.S. territory over persistent corruption and mismanagement by the island's two main political parties, a severe debt crisis, a sickly economy and a slow recovery from Maria, which devastated Puerto Rico in September 2017.

"The people have awakened after so much outrage," said 69-year-old retired nurse Benedicta Villegas. "There are still people without roofs and highways without lights. The chat was the tip of the iceberg."

The crowd surged along the Americas Expressway despite the punishing heat — toddlers, teenagers, professionals and the elderly, all dripping in sweat and smiling as they waved Puerto Rico flags large and small and hoisted signs.

"This is to show that the people respect themselves," said Ana Carrasquillo, 26. "We've put up with corruption for so many years."

In an interview Monday with Fox News, Rosselló said that he will not resign and that he is focused on tackling corruption and helping the island recover from Maria.

"I'm making amends," he said. "I've apologized for all the comments that I made on the chat."

On Sunday evening, Rosselló, a Democrat, sought to calm the unrest by promising not to seek re-election in 2020 or continue as head of his pro-statehood New Progressive Party. That only further angered his critics, who have mounted street demonstrations for more than a week.

"The people are not going to go away," said Johanna Soto, of the city of Carolina. "That's what he's hoping for, but we outnumber him."

Asked who was advising Rosselló on staying in office, Rosselló's secretary of public affairs, Anthony Maceira, said the governor was speaking with his family, and "that carries a great weight." Rosselló's father, Pedro, was governor from 1993 to 2001.

The biggest newspaper in this territory of more than 3 million American citizens, El Nuevo Dia, added to the pressure with the front-page headline: "Governor, it's time to listen to the people: You have to resign."

Asked whether the governor should step down, President Donald Trump said that Rosselló is a "terrible" governor and that hurricane relief money sent to Puerto Rico has been "squandered, wasted and stolen" and the island's top leadership is "totally, grossly incompetent."

The demonstrations represent the biggest protest movement on the island since Puerto Ricans rallied to put an end to U.S. Navy training on the island of Vieques more than 15 years ago.

Monday was the 10th consecutive day of protests, and more are being called for later in the week. The island's largest mall, Plaza de las Américas, closed ahead of the protest, as did dozens of other businesses. The upheaval also prompted at least four cruise ships to cancel visits to Puerto Rico.

The crisis has stirred fears about the effects on the already fragile economy.

Puerto Rico is struggling to restructure part of its $70 billion in debt under federal supervision and deal with a 13-year recession through school closings, cutbacks in infrastructure maintenance and other austerity measures.

At the same time, the island is trying to rebuild from Maria, which caused more than $100 billion in damage, threw Puerto Rico into a year-long blackout and left thousands dead, most of them succumbing during the sweltering aftermath.

The island has also seen a recent string of arrests of Puerto Rico officials on corruption charges. Those arrested included the former education secretary.