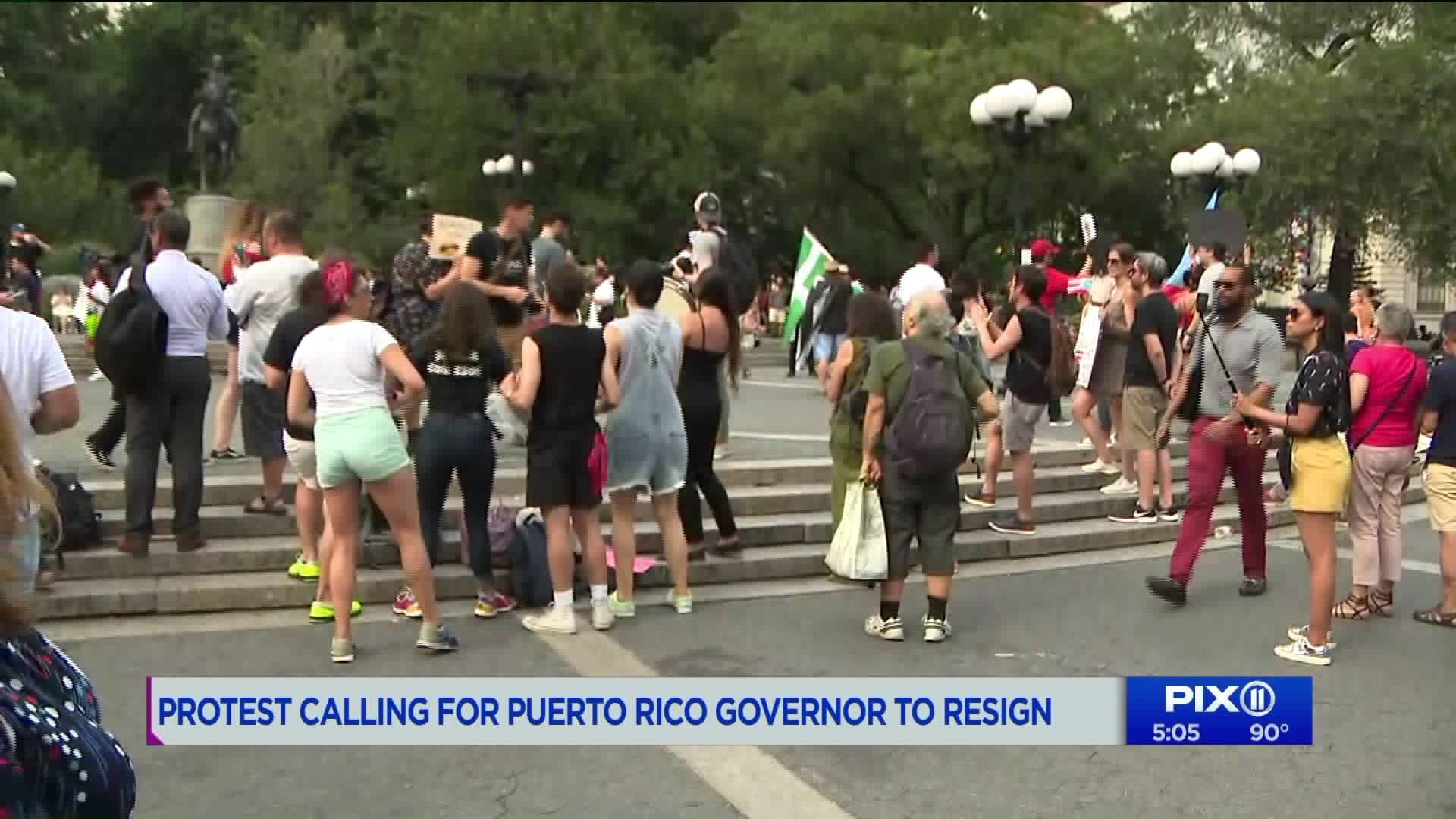 Puerto Rico`s Justice Department has issued summonses for everyone involved in a private chat group with Gov. Ricardo Rossell that has sparkedprotests across the American territory, department spokeswoman Mariana Cobian said Wednesday.

Puerto Rico's Justice Department has issued summonses for everyone involved in a private chat group with Gov. Ricardo Rosselló that has sparked protests across the American territory, department spokeswoman Mariana Cobian said Wednesday.

The participants, which include 11 of the governor's top aides and Cabinet members, will be ordered to appear before department officials over three days, Cobian said. Their cellphones will be inspected when they appear, she said.

Though Cobian said all participants of the private chat were being summoned, she declined to provide a list of names.

The FBI would neither confirm nor deny whether if it was separately investigating the chats, bureau spokesman Luis Rivera said.

Dubbed "RickyLeaks," the nearly 900 pages of chats from the governor's private Telegram Messenger group contain profanity-laden, homophobic and misogynistic messages aimed at opposition politicians, journalists and celebrities. Sent in December and January, the messages were obtained by Puerto Rico's Center for Investigative Journalism and published over the weekend.

The leaks came the same week that two former officials from Rosselló's administration were arrested by the FBI as part of a federal corruption investigation.

Now, both civilians and politicians -- even some from the governor's New Progressive Party -- are calling for the governor's resignation, with protesters filling the street in front of the governor's mansion in Old San Juan.

Demonstrators planned to march Wednesday evening from the Capitol to Rosselló's residence, known locally as La Fortaleza. The backlash has rippled to the mainland with protests also planned Wednesday in Miami, Orlando, Florida, and at New York's Union Square.

In addition, two Royal Caribbean cruise ships canceled stops on the island and US Secretary of State Mike Pompeo has nixed a Thursday trip to Puerto Rico. En route to Argentina, Pompeo had been scheduled to stop in San Juan to speak with consular staff, but he will instead head to St. Croix in the US Virgin Islands, the State Department said.

Rosselló announced he would not step down Tuesday, hours after police fired tear gas into crowds of protesters calling for his ouster. He also defended the actions of police and accused protesters of unleashing tear gas and setting fires during demonstrations Monday night.

Saying he was the only person on the chats elected by the people of Puerto Rico, he promised to work to restore the public's confidence in him.

"I have not committed any illegal or corrupt acts," he said. "I committed inappropriate acts and have expressed regret for that."

Rosselló has not responded to CNN's interview requests.

Among the insults Rosselló hurls in the chats: He calls a Puerto Rican-born New York official a "whore" and says she should be beaten; says an oversight board managing the island's financial crisis can "go f*** yourself"; and tells one of this then-top officials that he'd be doing him a "grand favor" by shooting San Juan Mayor Carmen Yulín Cruz.

That official -- Christian Sobrino Vega, ex-chief fiscal officer and Rosselló's representative on the aforementioned oversight board, also was implicated in the withering chats, making a homophobic remark about singer Ricky Martin and mocking those killed in Hurricane Maria.

Yulín Cruz, a member of the opposition Popular Democratic Party who is running for governor, told CNN on Wednesday that the chats demonstrate that Rosselló and his supporters were hoping to silence their critics. She encouraged residents of her city, the territory's capital, to join in demonstrations demanding the governor's ouster.

"This is the people of Puerto Rico ... clamoring for whatever is left of our democracy to be saved so we can begin to move away from the darkness of Ricardo Rosselló," she said. "I am not advocating violence. I always advocate peaceful resistance, but just like (the Rev. Martin Luther King Jr.) said, I cannot condemn the indignation of people."

She has filed a report over what she called Rosselló's and Sobrino Vega's death threat against her, she said, and has called on the Legislature to begin impeachment proceedings immediately.

"I expect an unequivocal shout for his resignation that goes beyond the divisions that often plague our people," she told CNN. "We will come together. After today, he will not be able to hide behind false petitions for forgiveness."

Rosselló has repeatedly said he has no intention of stepping down and that he has much work left to do.

"Despite the difficulties that we have internal and external, the work will continue and the agenda will be completed in all areas," he said. "You do not give up on work already started, and today, more than ever, a lot of people are counting on my commitment to do so."

If Rosselló were to resign, the law says the secretary of state, a post that is currently empty, is next in line to take the helm, followed by the island's treasurer.