As 9/11 illness victim Luis Alvarez is laid to rest, it’s revealed that the legislation he gave his life for might be named for him 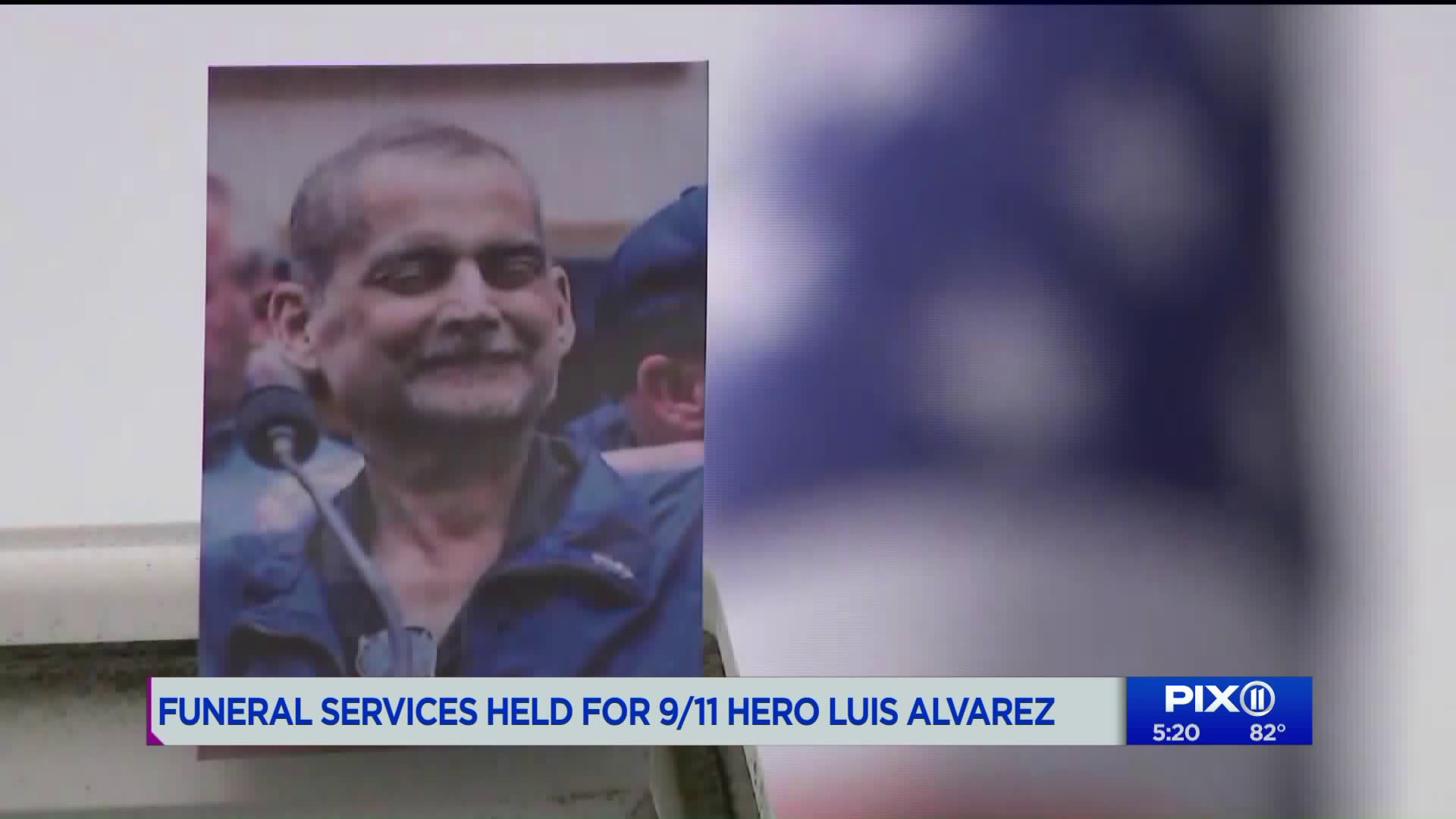 A former New York City police detective who fought until his final days for the extension of the Sept. 11 Victim Compensation Fund was remembered Wednesday with a funeral service in Queens.

ASTORIA, QUEENS -- Thousands of first responders from across the Tri-state and beyond bid a final farewell to Luis Alvarez on Wednesday.

He spent his last breaths, literally, fighting for them, so they paid respects at his funeral. At the mass at Immaculate Conception Church, it became apparent that Alvarez’s efforts to ensure that 9/11 victims get properly compensated will be fruitful posthumously.

Alvarez, a retired NYPD narcotics division and bomb squad detective, spent three months after the 9/11 attacks searching for survivors and for remains. He contracted colorectal cancer three years ago as a result of his exposure to Ground Zero toxins.

Despite 68 rounds of chemotherapy, Alvarez, who’d lived in Oceanside, Long Island and was raised in Astoria, ultimately perished from his 9/11 illness.

The day began in Oceanside, where a funeral procession carrying Alvarez drove beneath a US flag hung from local hook and ladder trucks. The hearse led the procession along the 24-mile route to Astoria, Queens.

Along the way, some people, who never even knew the NYPD veteran, faced the procession, holding flags, and displayed signs expressing support.

Outside of the church in Astoria, there were remembrances from people who've known Alvarez for most of his life.

"He grew up in this neighborhood," said Espi Deviccaro, a family friend. "Everybody he loved was here," she told PIX11 News. "His voice and his legacy will live on."

"Louie could have spent his last days and weeks and hours with his family and loved ones," Feal, founder of the Fealgood Foundation, an organization which raises money to help first responders and veterans, said.

Instead, said Feal, Alvarez "chose to spend" his final days "making... a difference."

" I hope when my time comes I'm half the man that Luis Alvarez was," said Feal.

Before Congress last month, Alvarez called for the 9/11 Victims' Compensation Fund, which is running out of money, to be fully funded. Alvarez testified on Capitol Hill with Feal and with comedian and activist Jon Stewart.

On Wednesday, Stewart was among mourners on hand at the church, as was NYPD commissioner James O'Neill.

"All Lou wanted in return was to have his government take care of his brothers and sisters," the commissioner said. "To make sure they were taken care of when they fall ill."

From Alvarez's nieces and nephews bringing communion gifts to the altar, to his sister and his eldest son speaking to the congregation, the detective's family was very involved in his funeral mass.

Aida Lugo, Alvarez's younger sister, said that on the last night of Alvarez's life, his night nurse encountered him walking around the hospice, short of breath.

He told the nurse that he "was looking for other first responders" to help.

"How we walk with the broken, "speaks louder than how we sit with the greatest," Lugo said.

She got a standing ovation at the end of her address, in which she invoked the NYPD motto, comparing it to her brother's life.

"In his last moments before taking his last breath," his son said, "I told him I love him. 'I love you, Dad. I promise to keep walking on the brave side of the line. I promise to be the man you inspired me to be.'"

With the playing of "Taps," a flyover by three NYPD helicopters, and bagpipes and drums from the NYPD Emerald Society, Alvarez received full honors.

The greatest honor, however, may be posthumous. Thanks in no small part to Alvarez's testimony, according to both of his members of Congress, Democrat Carolyn Maloney and Republican Peter King, the 9/11 Victims' Compensation Fund is expected to get approved by both houses of Congress to be funded for the next 70 years.

"When it is done, it will be to a large extent because of Lou Alvarez," King said.

Feal, the victims' advocate, and Maloney, the member of Congress, both said that if the victims' compensation funding measure becomes law, it may be named in part after Alvarez.