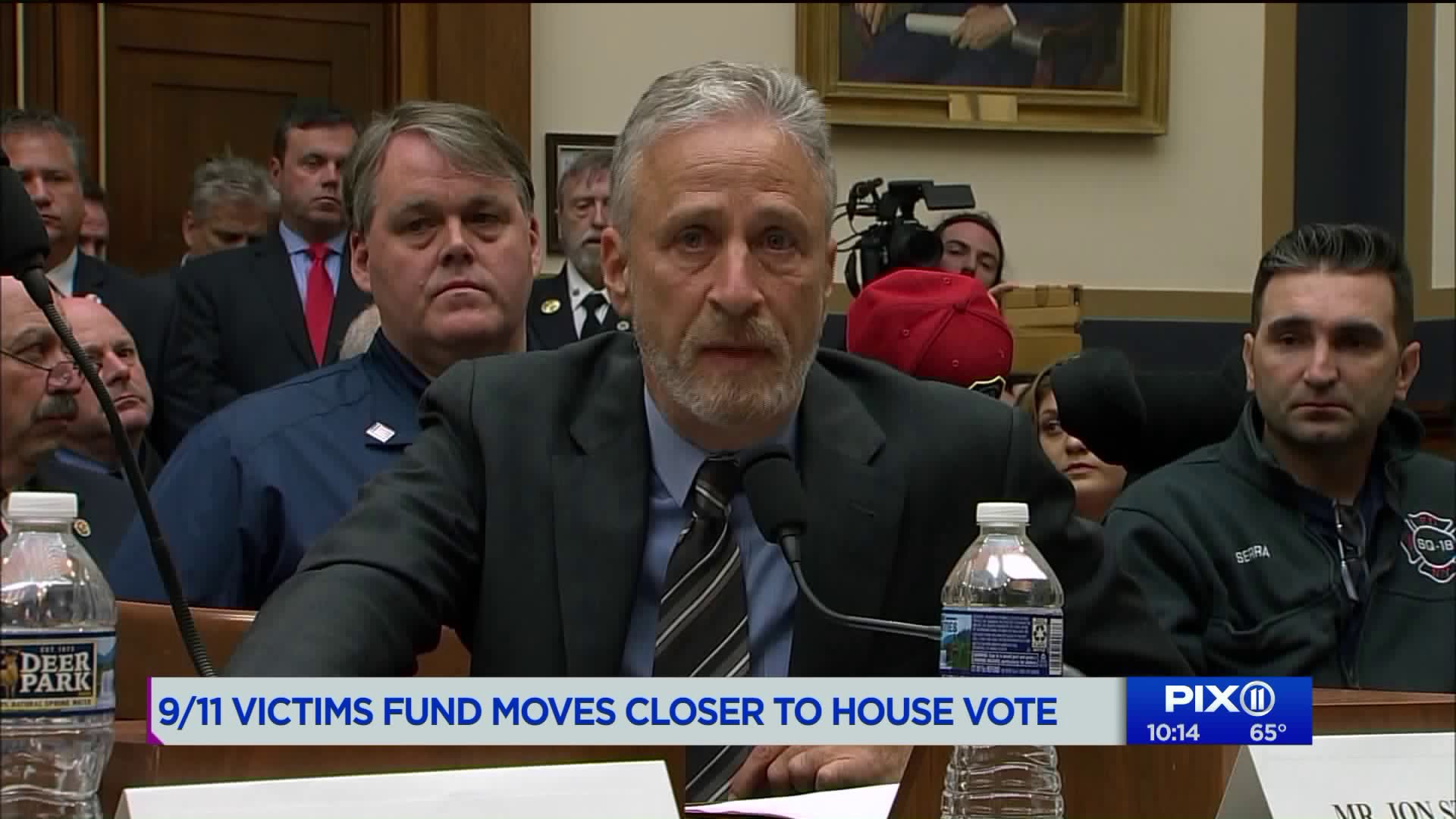 A House panel passed a bill Wednesday to authorize additional funding for the September 11th Victims Compensation Fund until 2090, one day after comedian Jon Stewart sharply criticized members of Congress for not attending a subcommittee hearing on the issue and gave an emotional plea to extend the funding. 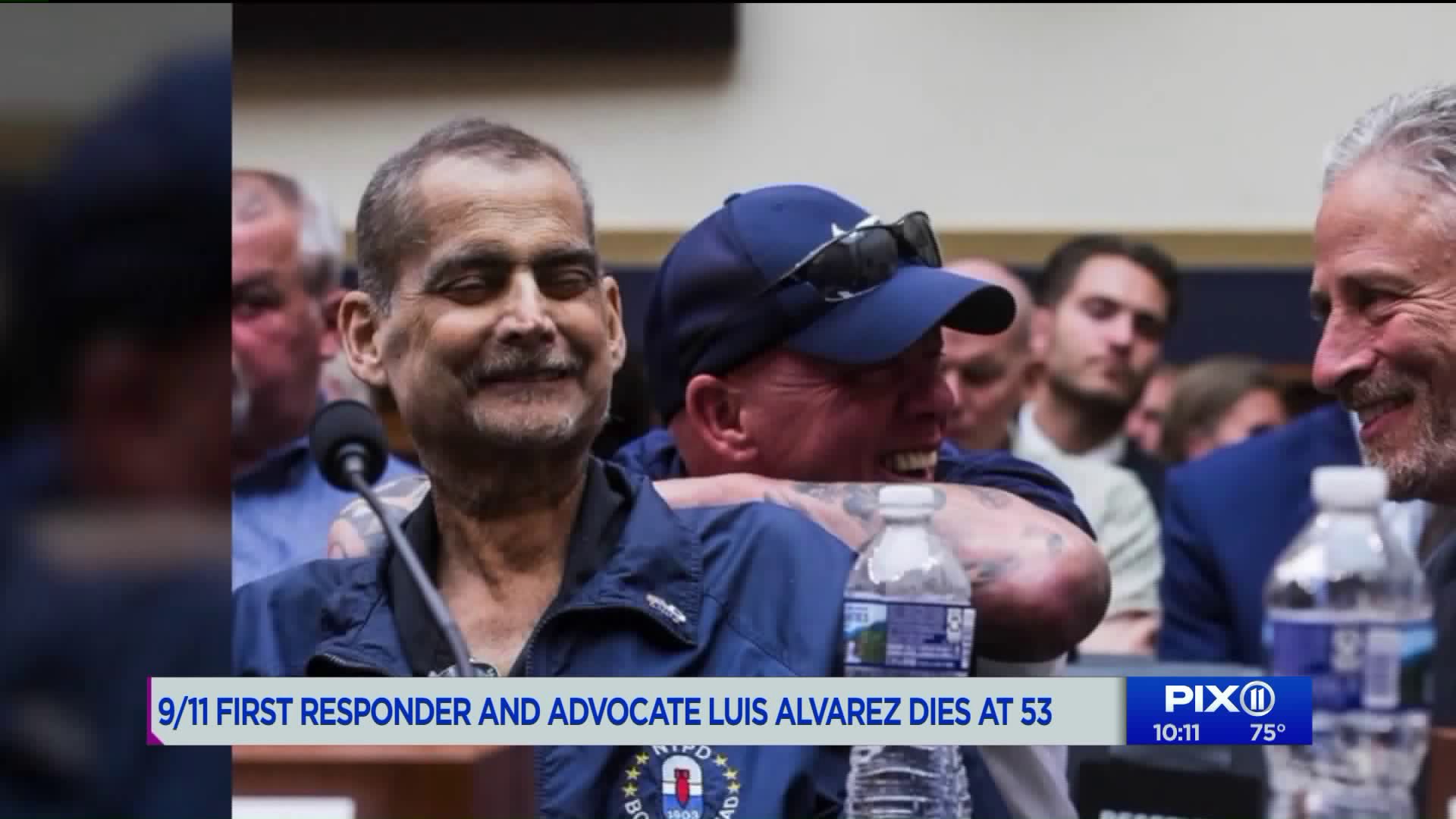 Luis Alvarez, a 9/11 first responder who recently testified before Congress about his 9/11-related medical issues, has died, his family confirmed Saturday morning. He was 53.

"It is with peace and comfort, that the Alvarez family announce that Luis (Lou) Alvarez, our warrior, has gone home to our Good Lord in heaven today," family member Matt McCauley wrote in a Facebook post Saturday around 6:30 a.m.

Alvarez was one of the first responders who testified in a House Judiciary Committee hearing on Tuesday, June 11, asking legislators to reauthorize the September 11th Victim Compensation Fund. The fund provides money to those who responded to the 2001 World Trade Center terrorist attacks and are now suffering medical problems.

Alvarez was diagnosed with colorectal cancer in 2016. He blamed his illness on the three months he spent in the rubble of the World Trade Center's twin towers after the 2001 terrorist attacks.

NYPD Chief of Detectives Dermot Shea confirmed the news on Twitter Saturday morning, writing "Lou Alvarez has lost his battle with 9/11-related cancer. An inspiration, a warrior, a friend—we will carry his sword."

He exemplified the NYPD motto, “Fidelis Ad Mortem” or “Faithful Unto Death.” Detective Lou Alvarez has lost his battle with 9/11-related cancer. An inspiration, a warrior, a friend—we will carry his sword. https://t.co/utRphj7owx

Sen. Bernie Sanders said on Twitter Saturday, "We mourn the loss of Luis Alvarexz, a champion for the health of 9/11 first responders, and one of the selfless men and women who searched for survivors at Ground Zero."

Today, we mourn the loss of Luis Alvarez, a champion for the health of 9/11 first responders, and one of the selfless men and women who searched for survivors at Ground Zero.

We must build a society where we take care of each other and treat heath care as a human right. https://t.co/lB1bBgzaGh

Sen. Chuck Schumer tweeted his condolences Saturday as well. "NYPD Detective Lou Alvarez died at peace knowing his life made a difference to others and will save lives in the future," the Senate Minority Leader said. "He was a great man."

NYPD Detective Lou Alvarez died at peace knowing his life made a difference to others and will save lives in the future.

He was a great man. My prayers go to his family, the NYPD, and all who loved him. https://t.co/anHtQyzt4A

"That wasn't my intention (to give McConnell the badge). That was Luis' intention. Luis wanted Mitch McConnell to have his badge. And let me tell you something, for a New York City police officer to give up his badge, that's like somebody donating an organ, and Luis wanted the Senate majority leader to understand the importance of this and to be reminded that people are sick and dying," 9/11 first responder John Feal said on Wednesday to CNN.

Many lawmakers on the panel did not show up for the initial hearing earlier in June, sparking a fiery speech from comedian and fund proponent Jon Stewart.

Alvarez, appearing frail and speaking slowly, told lawmakers in the room that he planned to get his 69th round of chemotherapy the following day. "You made me come down here the day before my 69th round of chemo, and I'm going to make sure that you never forget to take care of the 9/11 responders," he said.

"We were there with one mission, and we left after completing that mission," he said. "I have been to many places in this world and done many things, but I can tell you that I did not want to be anywhere else but Ground Zero when I was there."

He added, "Now that the 9/11 illnesses have taken many of us, we are all worried about our children and spouses and our families if we are not here."

On Wednesday, June 19, Alvarez posted on Facebook that he was entering end-of-life hospice care after tests revealed that his liver had completely shut down because of his tumors.

"So now I'm resting and I'm at peace. I will continue to fight until the Good Lord decides it's time," he wrote. "I will try to do a few more interviews to keep a light on our fight for the VCF benefits we all justly deserve. Please take care of yourselves and each other."

What is the Victim Compensation Fund?

The fund was created in the months following the 2001 attacks and was initially active for two years, paying more than $7 billion relating to injuries and deaths caused by the 9/11 attacks.

But first responders who spent weeks at the site breathing in noxious air clouded with debris from the collapsed buildings -- after New York and federal officials told them it was safe -- have since been diagnosed with a variety of debilitating illnesses and cancers.

Congress and President Barack Obama agreed in 2010 to pay their medical costs, reopened the fund and set aside $2.7 billion to pay victims just learning about chronic health problems resulting from their work in 2001. In 2012, the government determined that cancers can be compensated as part of the fund.

It wasn't nearly enough money, however, and in 2015 Congress added $4.6 billion in funding, along with new controls and limits on some payments. The special master who administers the fund anticipates that total payouts for claims filed before the measure expires in 2020 could be far higher: $11.6 billion, if a current uptick in claims -- largely caused by an increase in serious illnesses and deaths -- continues.

The current proposal to permanently extend the fund would authorize it through 2089. It has plenty of support in the House, where it passed the Judiciary Committee last week, and Sen. Mitch McConnell indicated that Congress would address the fund.

As of May, more than 12,500 cases of cancer had also been diagnosed, according to The World Trade Center Health Program, a separate health care program related to the victim fund run by the Centers for Disease Control and Prevention.