With hate crimes on the rise, leaders of many faiths gather in NYC to combat the problem 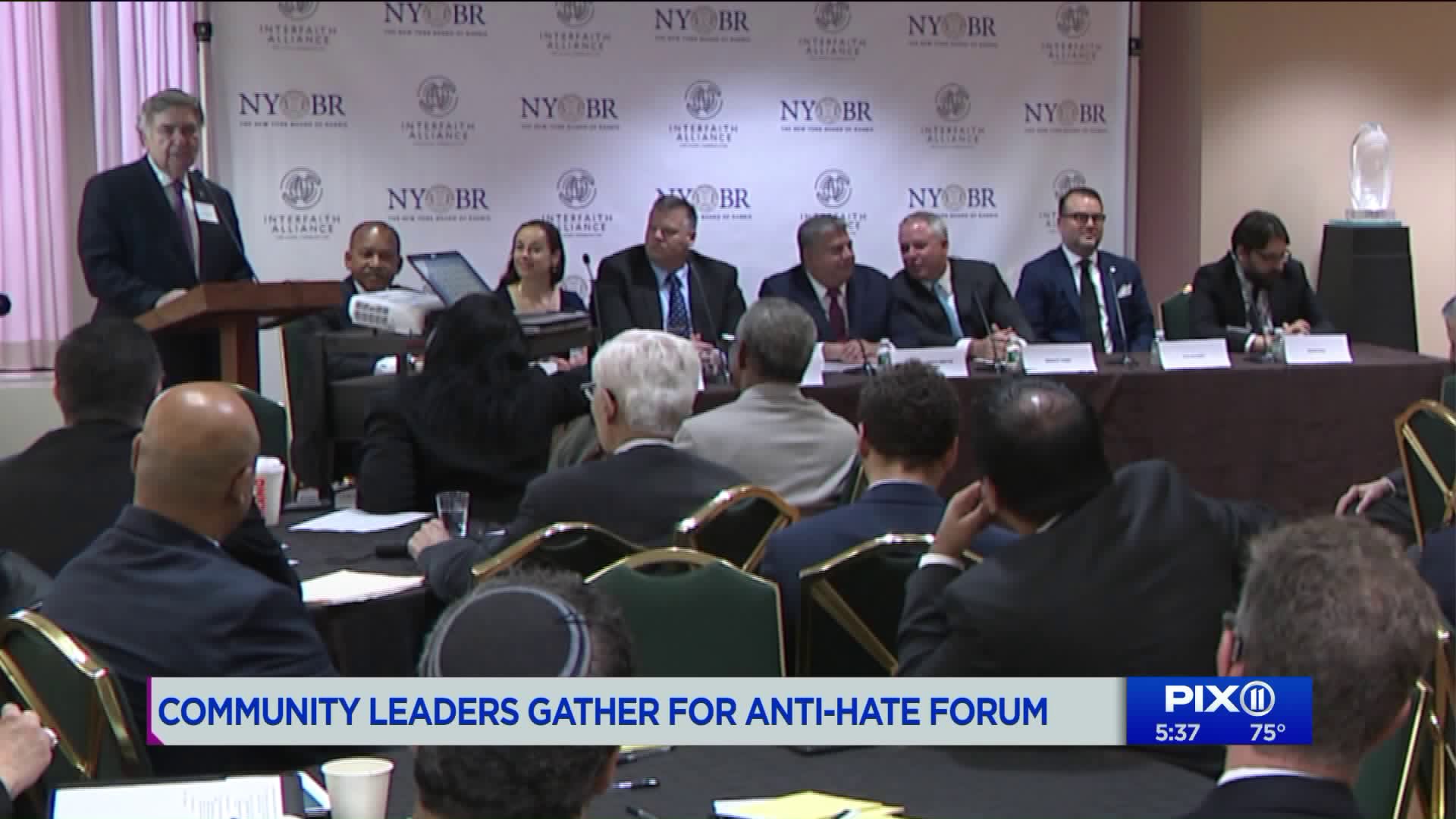 The city held an "anti-hate" forum in the wake of many acts of hatred against people of various faiths.

MIDTOWN MANHATTAN -- From the mosque shootings in Christchurch, New Zealand to smaller, hostile acts on a frequent basis here in the Tri-state, the number and frequency of hate crimes is on the rise. On Thursday, leaders of faith communities from around the region, the nation, and the world gathered to analyze the problem, and to explore ways to confront it and prevent acts of hate.

The summit meeting, hosted by the Roman Catholic Archdiocese of New York and organized by the Interfaith Alliance and the New York Board of Rabbis, came two days after somebody scrawled graffiti saying, “Kill Arabs” on a Brooklyn bus shelter. That hate crime happened exactly four years after the massacre of nine members of a Charleston, South Carolina African-American church.

Both crimes were important parts of the conversation at the interfaith summit against hate. Rev. Anthony Thompson knows the effects of hate crimes firsthand. His wife, Myra, was killed in the Charleston church shooting.

"Everybody thought there would be [a] race riot, there would be burnings, looting, taking advantage of white people, but it didn't [happen]," he said in an interview with PIX11 News. "It was quite the opposite. It all just stemmed from forgiveness."

He said that the Charleston community's reaction to the killing of his wife and eight other parishioners at the Mother Emanuel Church is exemplary for other faith communities and for other cities. "We forgave Dylan," he said, referring to the gunman, who's now serving nine life sentences in prison, without parole.

Rev. Thompson served on a panel at the summit, along with other faith leaders, and law enforcement officials and security experts from across the country, as well as from some other countries.

The head of New York's archdiocese welcomed them all in a short talk that said they'd chosen the right place to convene.

"I know we've got our problems," said Cardinal Timothy Dolan, "but New York, we're sort of a living laboratory of people getting along."

Law enforcement leaders were on hand to provide perspective on the rise of hate crimes, and to share strategies for combating them.

"If you don't have the dialogue, you have nothing," said Chief Scott Schubert, of the Pittsburgh Police Department. "All you do is respond," rather than prevent hate crime, he said.

He commanded the officers who responded to the Tree of Life Synagogue shooting in Pittsburgh last October, where eleven worshipers were killed. The chief, along with other law enforcement leaders, including Benjamin Tucker, the second highest ranking member of the NYPD, emphasized that interactions between houses of worship and police are key to prevent hate attacks.

Still, some 42 percent of metro New York residents said in a survey that they're not religious, or they express skepticism about faith.

The moderator of the summit said that it's vital to keep the non-believers well in mind to counter hate, and to heal from it.

"We don't ask are you a believer or a non believer," said Rabbi Joseph Potasnik of the New York Board of Rabbis, and FDNY chaplain. "We don't discriminate that way," he continued. "We just say, 'You're a person, you're hurting, we need to help you.'"