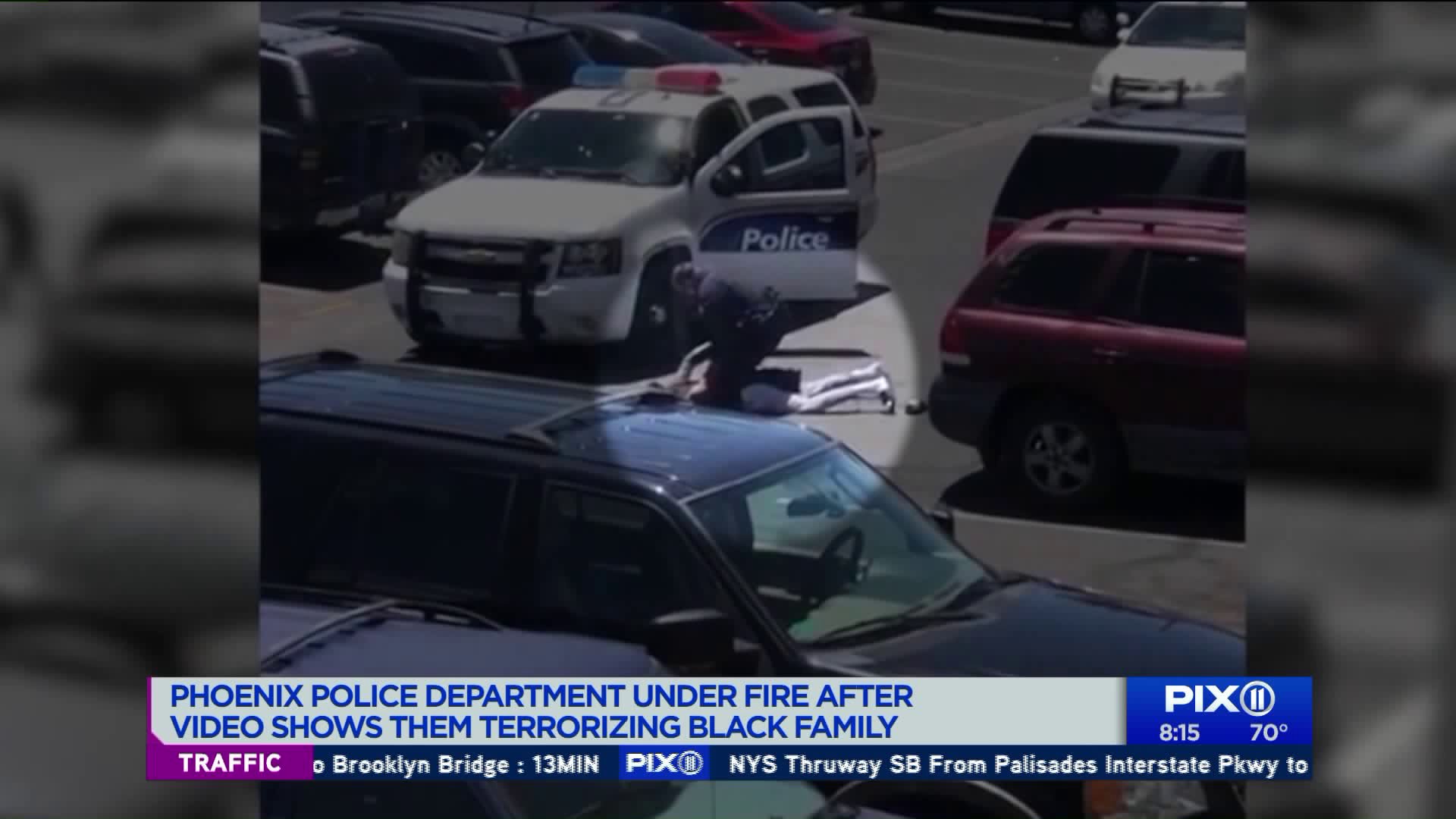 The mayor of Phoenix apologized to a family who said that police drew guns on them after an alleged shoplifting incident at a Dollar Store last month. The couple -- Dravon Ames, Iesha Harper and their two children -- have filed a notice of claim against the city for $10 million, which serves as a precursor to a lawsuit. In the notice of claim, they say that the police incident began after they realized that their 4-year-old daughter had taken a Barbie doll from the store.

The mayor of Phoenix apologized to a family who said that police drew guns on them after an alleged shoplifting incident at a Dollar Store last month.

"I, like many others, am sick over what I have seen in the video depicting Phoenix police interacting with a family and young children," Mayor Kate Gallego said in a statement.

"It was completely inappropriate and clearly unprofessional. There is no situation in which this behavior is ever close to acceptable. As a mother myself, seeing these children placed in such a terrifying situation is beyond upsetting. I am deeply sorry for what this family went through, and I apologize to our community."

The couple -- Dravon Ames, Iesha Harper and their two children -- have filed a notice of claim against the city for $10 million, which serves as a precursor to a lawsuit. In the notice of claim, they say that the police incident began after they realized that their 4-year-old daughter had taken a Barbie doll from the store.

A police report obtained by CNN says that the incident escalated after the couple refused police commands.

Team ROC, a philanthropy affiliated with Jay-Z's Roc Nation, said Sunday it had offered legal and emotional support to the family, according to spokesman Didier Morais.

Mayor Gallego said the city is speeding up the implementation of body-worn cameras across its police department so that every precinct will have cameras by August. She also called for a community meeting on Tuesday to discuss the incident with residents.

"I recognize that to get to the bottom of this issue and implement meaningful change, we are going to have some uncomfortable and painful conversations. These conversations must continue until every one of our residents feels safe in our community."

What the lawsuit and video say

The family said the incident was on May 29, but police said it happened May 27. Police said they were made aware of video on June 11.

After they left the store, Ames said the couple pulled into an apartment complex to drop their daughter off at a babysitter. Then an officer began banging against their window, yelling and threatening to kill them.

Ames said there were no sirens or lights to indicate that they were being pulled over beforehand and the officer who was pointing a gun at them did not immediately identify himself as an officer.

In the 12-minute blurred-out video posted on the department's Facebook page, one officer can be seen handcuffing Ames, first on the ground and then against a police car. The officer kicks Ames and can be heard yelling multiple times, "When I tell you to do something, you f****** do it."

Another officer appears to be pulling a gun on the passenger side of the couple's vehicle before Harper exits the car, holding a small child, with a second child by her side.

Harper, who was five months pregnant at the time, said she was terrified.

"I I really thought he was gonna shoot me in front of the kids," she told CNN by phone Friday. She chose to give her two children to a "complete stranger because I didn't trust the police to have her," she said.

During the video, officers can be heard telling her to get her hands up.

In a statement, Phoenix Police said the incident began when an officer was advised by store employees of shoplifting and was directed to people getting into a car. As the officer walked toward the vehicle, the car quickly backed up and left the parking lot, police said.

The car stopped at another road, one of the women got out and the car then drove away. That woman was detained by the officer, who learned she had three misdemeanor warrants for her arrest, police said. The woman was later booked on those warrants, according to police.

Police followed the vehicle with the family inside to an apartment parking lot, and an officer gave loud verbal commands for the occupants to get out with their hands up, according to the police report.

Ames yelled that he did not do anything wrong and began to reach towards the center of the vehicle, causing the officer to draw his handgun, according to the report. Ames then began to comply and put his hands above the steering wheel, and he was then handcuffed, the report states.

The officer gave commands to Harper, still inside the vehicle, to put her hands in the air, but she refused, the report states. The officer feared that she was hiding something or was reaching for a weapon, according to the police report.

The report also says that Harper was "loud" and "verbally abusive" and refused police commands.

Once they were both detained, Harper admitted that her aunt and her daughter had gone into the store, and when the child came out with a doll, she believed they had stolen it because they didn't have any money, according to the report.

Harper said that when police contacted them, she was scared and did not know what to do, according to police. She also said she was "very sorry" for her behavior and that it was not appropriate, the report states.

He also stated he knew he was driving on a suspended driver's license, police said and he was cited and his vehicle was impounded.

The doll was recovered and was returned to the store, the police report states.

Police further said that, because the stolen property was returned, store employees said they did not want to prosecute the case, so no one was charged. No injuries to the man, woman or two children in the car were reported to police.

In a video posted to the department's Facebook page Friday, Phoenix Police Chief Jeri Williams said she was "disturbed by the language and the actions of our officer."

"I assure you that this incident is not representative of the majority of Phoenix police officers who serve this city," Williams said.

Authorities said the incident is under investigation.

"The Phoenix Police Department takes all allegations of misconduct seriously and for this reason, this incident is currently being investigated by the Professional Standards Bureau," the department said.

He told CNN affiliate KNXV that the officer who is seen sweeping Ames' leg is now on a non-enforcement assignment. The police department has not named any of the officers involved.