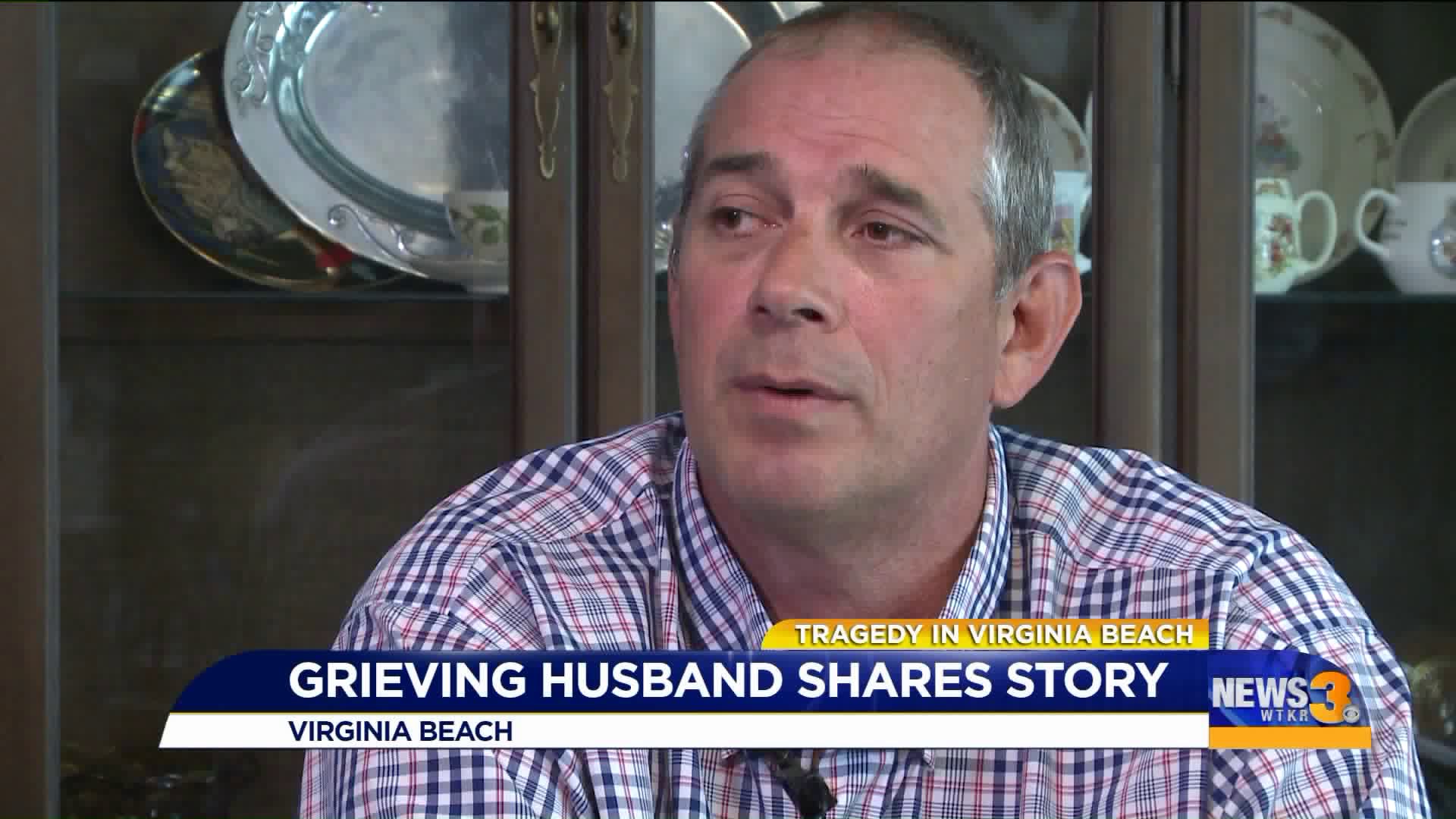 VIRGINIA BEACH, Va. - Battling extreme loss and learning how to live as a recent widower, one Virginia Beach man is looking for answers to what led up to the mass shooting that killed his wife.

On May 31st, 42-year-old Katherine Nixon was killed in Building 2 of the Virginia Beach Municipal Center.

While Jason Nixon has spent the the last few weeks grieving and trying to explain to his three daughters they will never see their mother again, he is also working to make sure her death and the deaths of 11 others is not a flash in the pan.

Jason and Katherine would be celebrating 20 years of marriage July 21 with their three daughters, ages 13, 6 and 1.

"It will be the hardest anniversary I'll ever go through," Jason said.

The Nixons' world is now shattered into a million pieces.

"I can't get it out of my head; I just can't the phone call where she said she was shot. I don't sleep at night, and I throw up in the mornings," he said.

Kate, a veteran engineer for the City of Virginia Beach, was first shot in the shoulder in Building 2. At 4:06 p.m. that Friday, she called and implored her husband to call 911 while she worked to help others.

"She didn't seem distressed. She seemed in control," he said.

That was typical Kate - a logical thinker, calm and collected. He then fired off a slew of texts, hoping she would be on the other end.

"I had to sit the girls on the couch and say, 'Mommy was hurt by a very evil man,' and I said, 'Mommy won't be coming home anymore.' That broke my heart. It was the hardest thing I'd ever do," he said.

He's now a widower and a father left without his other half.

"Father's Day is coming up, and my daughters want to buy me presents for Father's Day and Kate would normally do that," he said.

His Plea for Transparency

A silver watch and a pair of eye glasses are all he has.

"This watch was covered in blood. It was ruined almost," Jason said.

"I want her journals, her phone, her clothes - they are my wife's, and I want them," he said.

The night before Kate was murdered, she sat Jason down at the table and told him she wanted to take a gun to work because a disgruntled co-worker was being fired and was threatening.

"She said, 'Jason, I have an eerie feeling. We are letting this guy go, and he is supposed to be police escorted out," he said.

"He has made comments he wants to shoot up the place, and I said, 'Well, you can take my gun and put it in your purse, and if nothing happens at least you will be a safe," he said.

That coworker was not the shooter who took the lives of Kate and 11 others, but Kate's intuition of a fateful Friday rang true.

"I wish she had taken it. Maybe the outcome would be different... I don't know," he said.

Now Jason is turning his grief into action. He has hired attorney Kevin Martingayle to call for an open investigation and release personnel records and documents related to the shooter.

"We want two things: The city can release all of the shooter's employee, personnel, complaints, behavioral issues and other records that may indicate there is some concern about the shooter," Martingayle said. "The second thing the city could do is request that the Attorney General's office or an outside law firm undertake an investigation, prepare a report and release the report in its entirety to describe all relevant events that preceded the shooting, during and after the shooting."

Jason told WTKR Kate had a lot of correspondence with the suspect.

"She thought he was a poor engineer and not a nice guy, she had a lot of bad vibes about him for a while," he explained.

Jason said there are more than 18 months' worth of emails that could signal trouble behind the walls of Building 2, and he says there is no better time than the present to be transparent.

"This is about mental health and people being trained properly, and there are red flags there," he said.

Red flags that may reveal why a man opened fire at his wife's workplace.

"I love my wife. My wife was a fighter. She fought to the end, and it's my turn to fight for her now," he said. "This can't just be a flash in the pan and we move on to the next story and forget Kate."