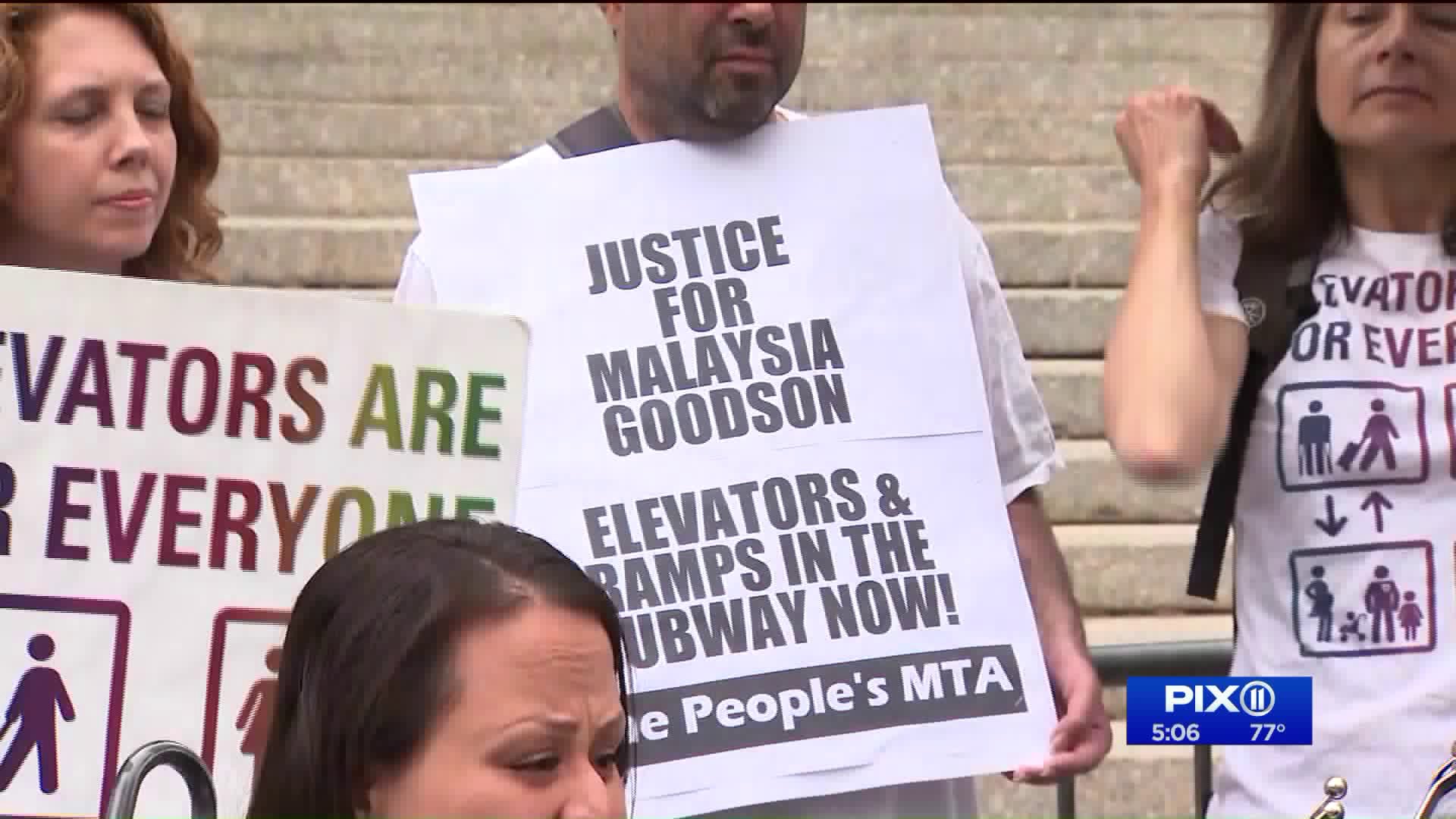 Right now, only about 25 percent of subway stations have elevators, and even those can be tough to navigate.

LOWER MANHATTAN — It's an issue that affects people who use the subway every day — accessibility to the system that takes so many New Yorkers to work, to school, and back home.

How can the MTA provide full accessibility on the rails? That's in litigation now, chiefly due to concerns over elevators at subway station across the city.

The MTA claims it can't yet guarantee that every subway station will have an elevator, but it's nonetheless committed to full accessibility. Advocates for the disabled maintain that an elevator at every station is something to which the MTA can commit now, and the only way to get it to do so is through legal action.

It's why a variety of disability rights activists and their attorneys were in court Wednesday, making their case before a state Supreme Court judge.

Michael Ring was in the gallery. He's recovering from a rare disorder that had him in a wheelchair for five years.

"I have to walk a mile to get to an elevator," he said, about the proximity of a subway station that's accessible by elevator. "[It] means you've got to go far to get to one that works, and it might not work," he added.

Ring said that he's a representative of physically able people who are trying to get the MTA to commit to a discrete plan for elevator access at all of its subway stations.

There are 472 stations in the New York City Transit system. Currently, only 119, about 25 percent, have an elevator.

Before Wednesday's court hearing, a few dozen of the plaintiffs held a rally in front of the courthouse. Some of them held signs memorializing Malaysia Goodson, the mother who died last January while carrying a stroller down subway stairs. Even though it was concluded that the cause of her death was not directly due to the more than a half dozen flights of stairs she climbed down, her case still clearly resonates.

"You carry a stroller down the stairs, you never think, 'I might die,'" said Diana Limongi, host of the Parenting & Politics podcast. "On that day when she died," Limongi continued, "I thought, 'Oh my God, how many times have I done this?"

Limongi said that it was all a reminder of why elevators are important for all subway passengers. She and fellow activists said that the MTA should issue a timeline for phasing in elevators throughout the whole system.

"It can be done," said Sasha Blair-Goldensohn, who is a named plaintiff in the lawsuit against the MTA. "They just need to commit to it in court."

He, and dozens of others, filled the third floor courtroom on Wednesday morning. There, Judge Schlomo Hagler listened to both sides' arguments, but after about an hour and a half, he rejected the MTA's motion to dismiss the lawsuit against it.

"This was an incredible ruling today," said Michelle Caiola, an attorney with Disability Rights Advocates, which argued the case.

Her colleague at the advocacy organization, Emily Seelenfreund, said that the ruling sent a strong message.

"This issue is no different," she said, than saying its illegal to prohibit women or people of color from access to public transportation. The judge's ruling, she said is "the same thing for people with disabilities."

Wednesday's decision, which disability advocates called a clear victory for them, is, nonetheless, a step in a long process, they said.

"Sometimes these cases can take years," said Susan Dooha, executive director of Center for Independence for Disabled New York. She said that she was speaking from experience. Her organization has fought, and won, disability cases in the past. She said that she was convinced that they'll prevail in this case, even if it takes a long time.

For its part, the MTA issued a statement after Wednesday's ruling. "We are disappointed with the ruling and are considering our options for appeal," the statement began. "The MTA is deeply committed to improving accessibility at a faster rate than ever before -- including the goal of making 50 more stations accessible in the next capital plan, ensuring that no rider will be more than two stops away from an accessible station at any time. We are also committed to increasing the speed and quality of our fully accessible buses completely envisioning the network for the first time since its creation. We know we have a long way to go, but we are fully committed to making this system one that can be used by all New Yorkers."

Both sides will be back in court on August 1st.