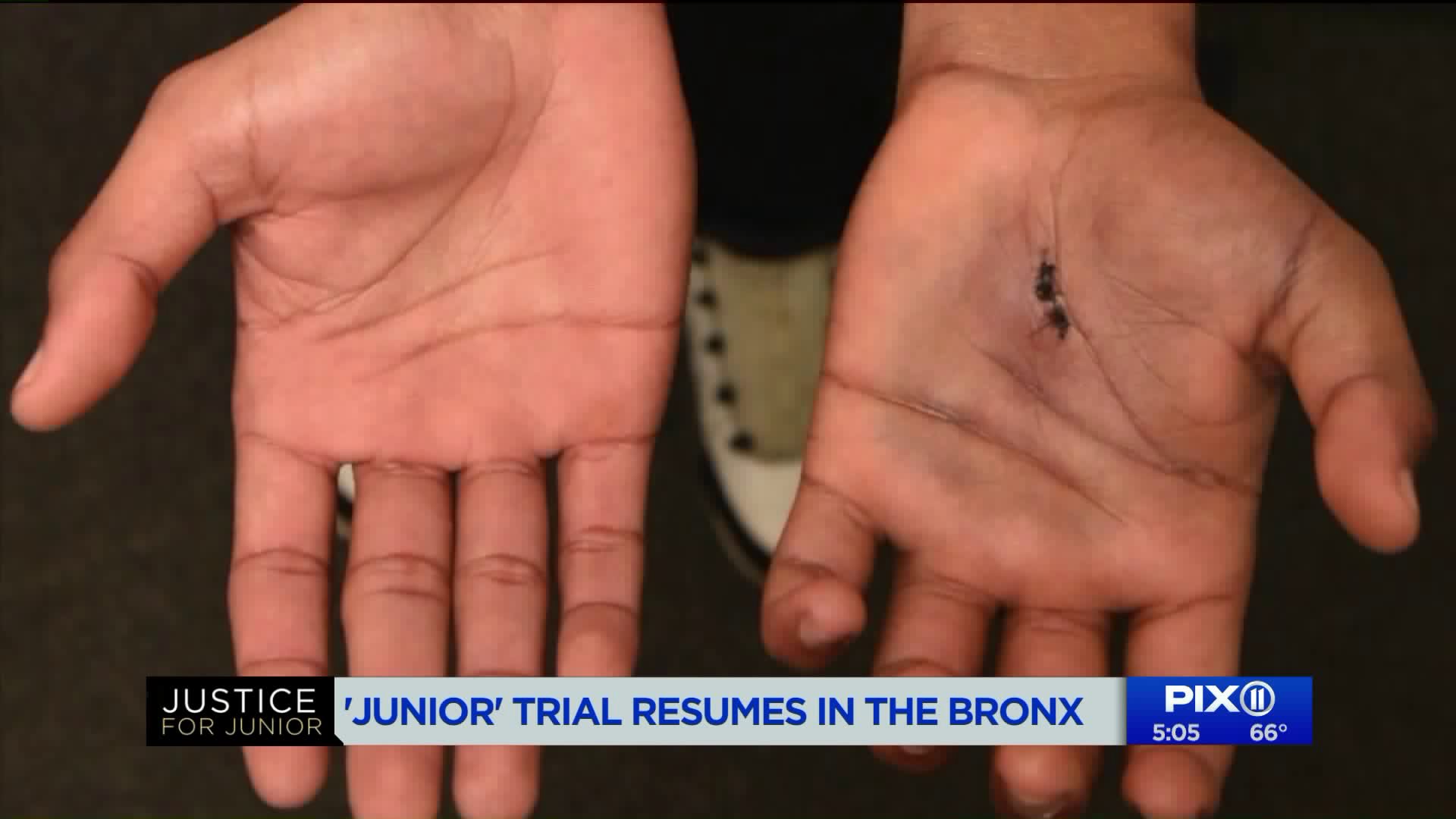 The girlfriend said she saw other members of the Los Sures set of the Trinitarios gang outside Garcia`s home when she arrived, and then she noticed one of his hands.

THE BRONX — The girlfriend of “Junior” murder defendant Elvin Garcia testified Tuesday that he pointed himself out in the infamous video that showed five men fatally stabbing the boy last June.

“He just told me that was him and he pointed at the image,” Yudelvi Mena, 21, told the jury, looking frail and uncomfortable on the witness stand.

He shared this with her a day after Lesandro “Junior” Guzman Feliz , a 15-year-old high school sophomore, was killed following a chase by at least 15 men in four cars in the Belmont section of the Bronx.

Prosecutors said Garcia was wearing a dark covering over his face when he allegedly stabbed Junior multiple times.

Mena, who said she’s studying medicine, testified she initially heard from Garcia late Wednesday night, June 20, the night of the murder, going into the early hours of June 21. He wanted her to come to his Bronx home, she told the jury.

“He called me to go to the doctor,” Mena testified.

The girlfriend said she saw other members of the Los Sures set of the Trinitarios gang outside Garcia’s home when she arrived, and then she noticed one of his hands.

“He had a hole, basically, through it,” Mena testified.

“He was just putting a tank top over it.”

Mena said she and Garcia rode in a cab, mostly in silence, to New York-Presbyterian/Columbia University Medical Center in Manhattan.

She testified he came up with a fake story for what happened to his hand, in case police had questions.

“That he got into a fight in the park because of me,” Mena said.

The phony fight was supposed to involve three men at a spot on 192nd Street in Manhattan.

Prosecutors said Garcia was actually accidentally stabbed by his co-defendant, Manuel Rivera, during the frenzied attack on Junior by five stabbers on the sidewalk outside the bodega at East 183rd Street and Bathgate Avenue in the Bronx.

During cross examination, Mena said she and Garcia went to Philadelphia on June 22nd, two days after Junior was killed, and stayed with Garcia’s uncle.

They returned to New York City, she said, on June 24.

Mena said that’s when Garcia received a call from police, asking him to go to a Manhattan precinct.

She was put in a separate room, she said.

Later, Mena said she learned Garcia had been taken to a Bronx precinct on Webster Avenue, where he was ultimately arrested.

Judge Robert Neary announced they “voluntarily excluded themselves from court.”

“We are not going to comment to the jury about the absence of the two defendants,” Neary said.

All defense attorneys remained in court, including the two representing the absent defendants.