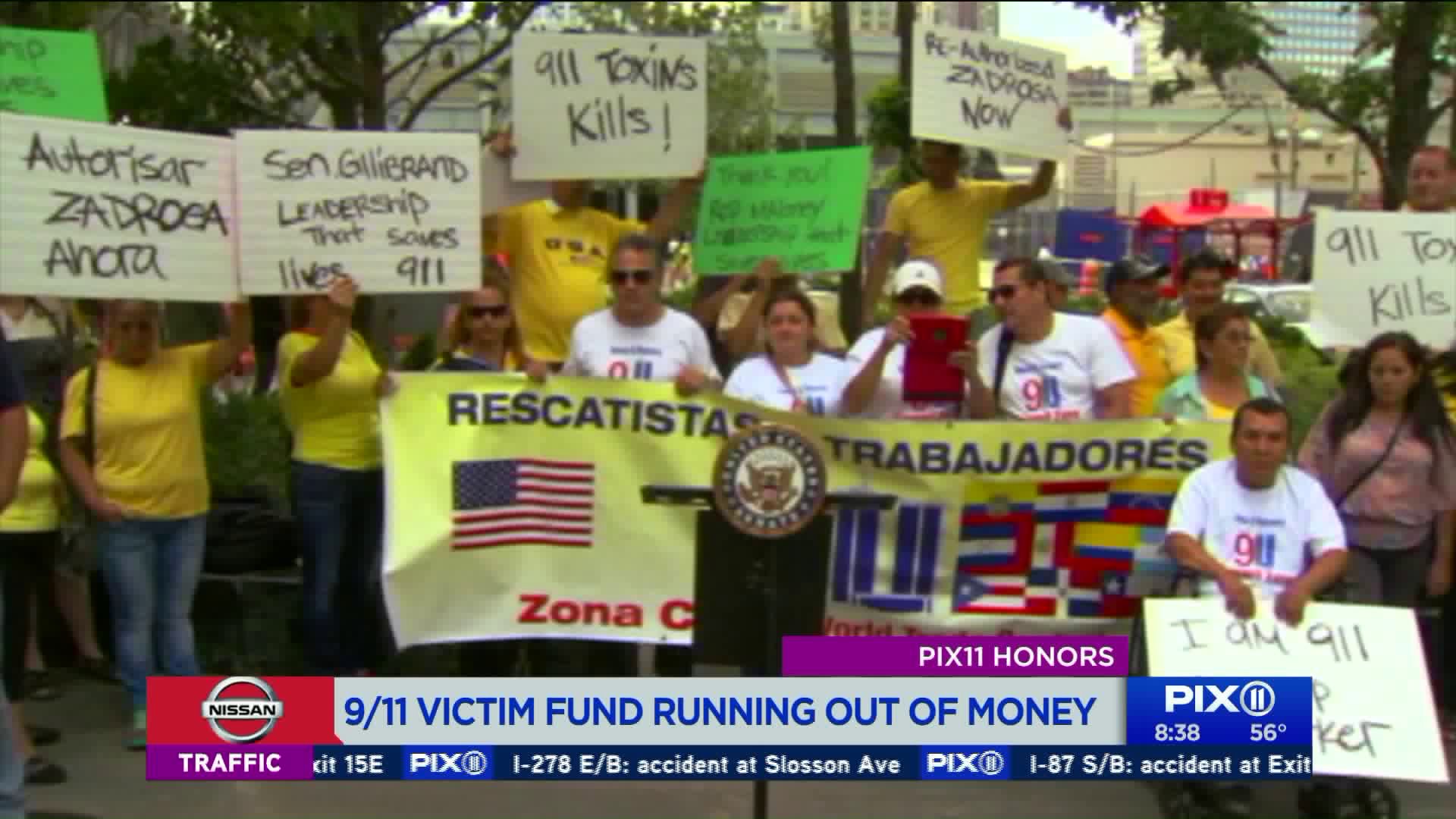 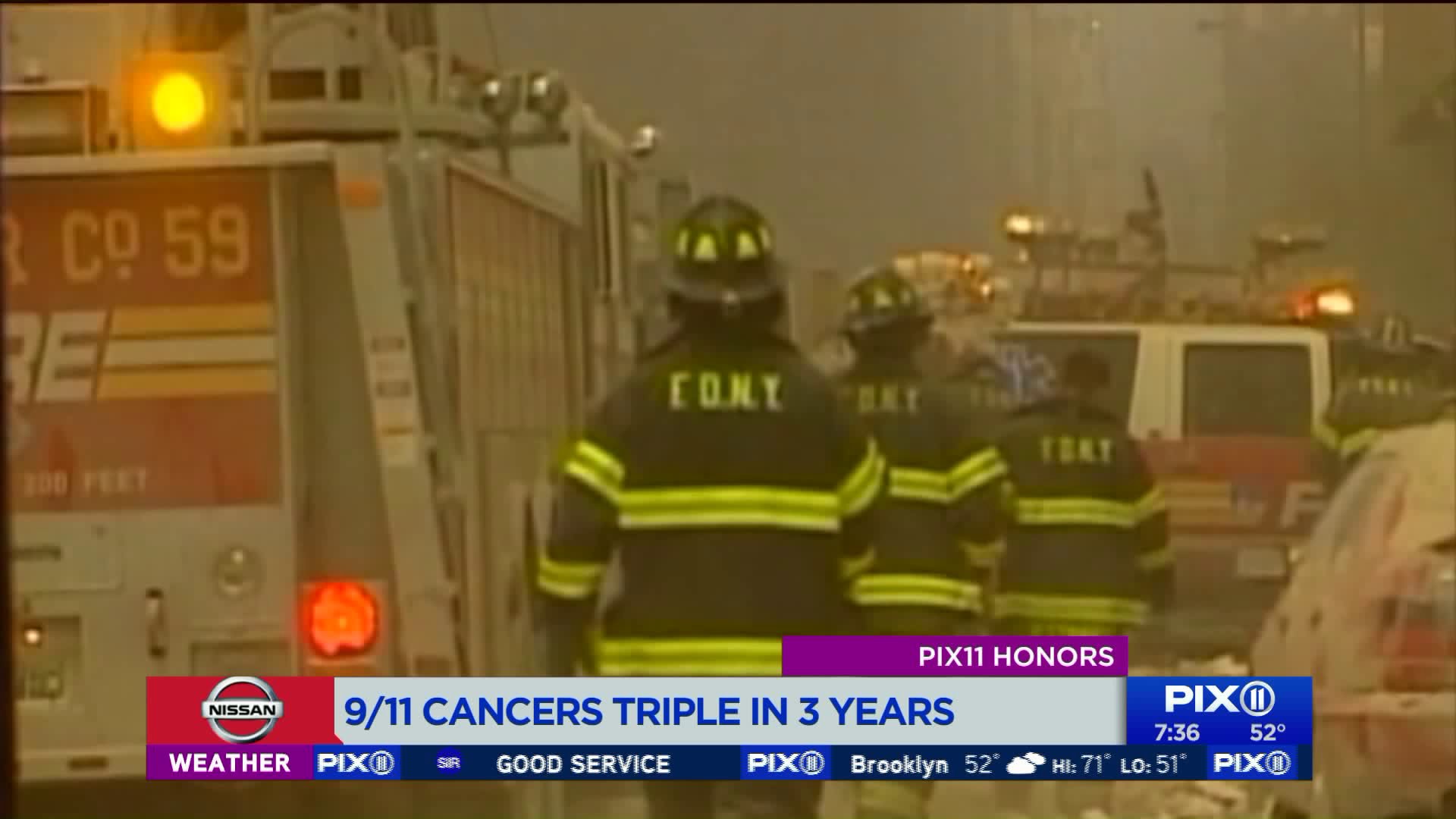 NEW YORK — Victims and survivors of the attacks of 9/11 are again fighting for first responders and their families.

They’ve been working with lawmakers in Washington to extend benefits from the Victims’ Compensation Fund.

That fund is meant to compensate families of those who were made ill with deadly cancers post-9/11.

Currently, the VCF is only able to pay 50% or less of the values established for claims because it's running out of money because many more responders are being diagnosed and dying. These are the teams fighting for them.

Lt. Billy Gormley was a firefighter in the FDNY.

On the job for 20 years, he was swept up in the aftermath of searching for his fellow first responders who died — 343 members of the FDNY.

He survived, only to be sickened with deadly illnesses like thousands of others.

Now his daughter is fighting for other families to get the compensation that Congress promised them.

Bridget Gormley explained what happened to her father. “You have a toxic slurry of chemicals cooking for 99 days and these firefighters digging in the pile looking for their brothers and sisters. My father succumbed to bladder cancer that traveled to his lungs.”

He’s now retired. He'd seen Bridget grow from a little girl to a young woman and watched as her physically impressive father succumbed to deadly cancers.

It's a story repeated too often among anyone who lived and worked in the lower Manhattan area after the attacks.  Alles talks the numbers.

So now families are seeing the promised awards, often the only financial security they have, get cut.  In half, or more.  And unless Congress members vote to re-authorize more funds, it could be devastating. Bridget explained, “Essentially it’s a piece of mind.   A lot of people getting sick are breadwinners of families and you remove the foundation and it’s kind of very unstable and you don’t know how you’re going to survive without them.”

John Feal of the Feal Good Foundation and lawyer Michael Barasch, who brought the original James Zadroga lawsuit, are also reaching out to lawmakers to ensure financial futures.

Michael Barasch explains. “Not a day goes by that we don’t see one of our clients dying. It’s horrendous. Congress has to do the right thing and extend the victim compensation fund. We’ve seen a spike of cancer. Blood cancers. Organ cancers. Pulmonary fibrosis. We haven’t even seen the asbestos cancers yet.”

Feal and Barasch are longtime allies in the fight for these first responders.

Feal was a demolition worker post 9-11, also sustaining a devastating foot injury. They point out, “Nobody expected the explosion of cancers and deaths we’ve seen. All of these cancers and respiratory illnesses have different latency periods, all of our immune systems are different.

The pair says they’ve been doing this for 15 years attending over 1,500 meetings with congressmen and senators.

Those visits with sick first responders, celebrities like Jon Stewart, and dozens of gritty New Yorkers, won them guaranteed health care for first responders for 75 years.  But, the second component, the victim's compensation fund, has been a political football. Only getting renewed for a few years at a time. Likely so other elected officials can foot the billion-dollar bill.

If the measure doesn’t pass, the dwindling fund would only hand out half, or less, of the awards that have been promised to sustain families.

It would be another blow to those who gave their all to New York and the nation.

Barasch summed it up. “It really is a moral imperative that we do the right thing.”