‘It’s disrespectful!’ Council speaker gets testy with chancellor at hearing on segregated schools 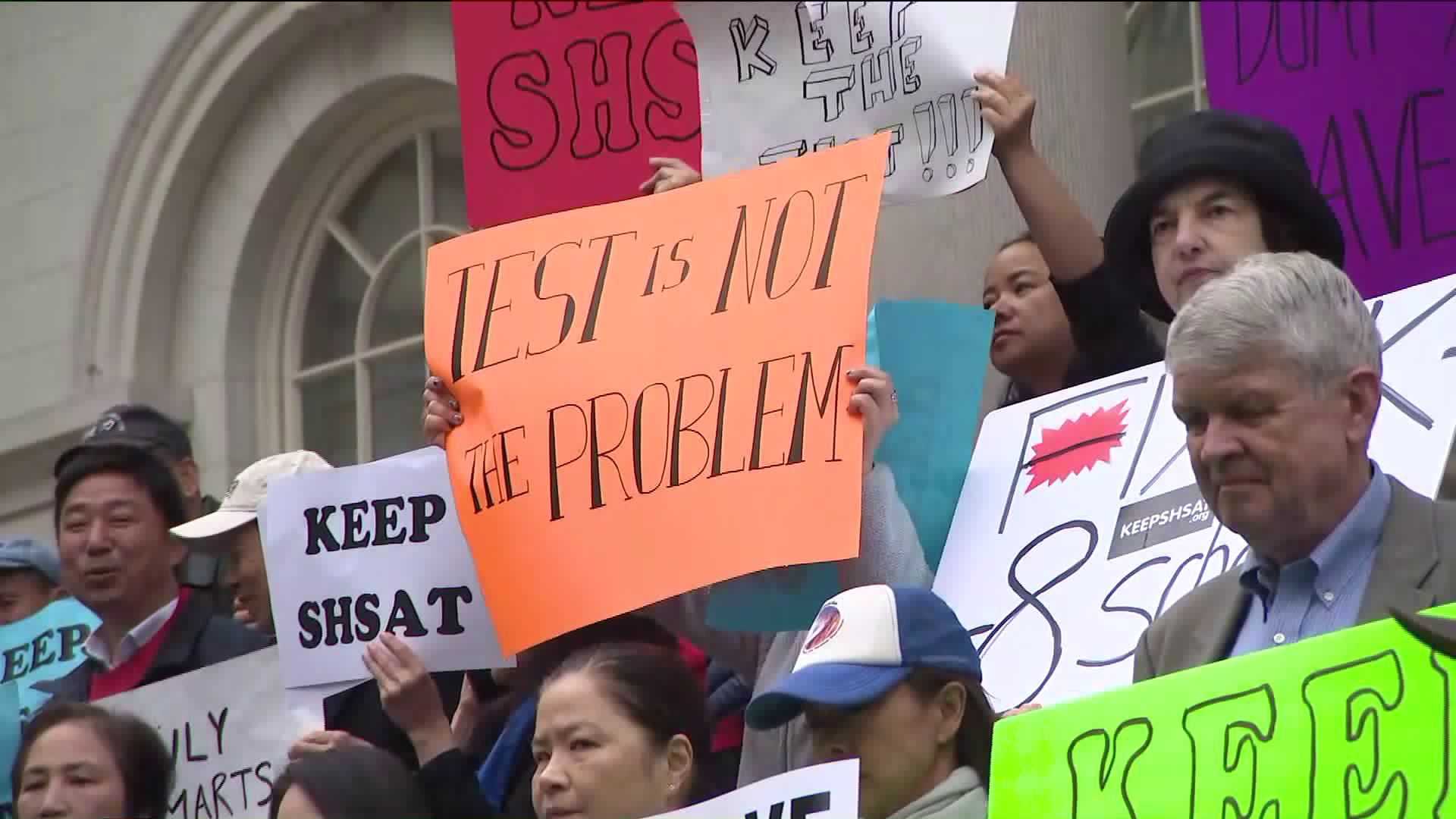 Shouting "keep the test," dozens of parents and activists made clear how they feel about a proposal by the mayor and the schools chancellor to scrap the test thats the only factor deciding whether or not a student gets admitted to one of the citys most selective high schools.

LOWER MANHATTAN — Sparks flew at City Hall on Wednesday over the issue of school segregation, with the most contentious aspect of the issue, that of the test for admission to the city's most selective schools, being at the heart of the heat. Intensity was palpable both inside and outside of the building.

On the City Hall steps Wednesday morning, a couple hundred parents and activists gathered, holding signs reading "The Test Is Not The Problem," and "Fix K-8 Schools," among other slogans. They also chanted, "Keep the test!"

They were referring to the Specialized High Schools Admissions Test, or SHSAT. It's the test used to determine whether or not a student gets admitted to one of the city's most selective high schools.

The gathered demonstrators made clear how they feel about a proposal by Mayor Bill de Blasio and Schools Chancellor Richard Carranza to scrap the SHSAT in favor of a matrix of factors, including middle school grades and statewide test scores, that would determine selective school admissions.

"To get rid of the test," said Peter Koo, a council member from Queens who joined protesters on the City Hall steps, "is the most stupidest thing the mayor wants to do."

Specifically, the demonstrators were calling for two changes, the first involving kindergarten through eighth grade.

"We want to have K- [through] eight enhanced by [having] gifted and talented [programs] in every single district in this city and we want to keep the test," said Wai Wah Chen, president of the Chinese American Citizens Alliance of Greater New York.

About two-thirds of all students in New York City public schools are Latino or black, but at the city's eight highly selective, specialized high schools, less than ten percent of black or Latino students passed the test and got in this year.

That disproportionality was at the core of an overall hearing on Wednesday about public school segregation in New York City.

The hearing began with statements from four students who’d been invited to testify.

Sokhnadiarra Ndiaye, an 11th grade student at Brooklyn College Academy, was one of the students.

The 10 minutes of student statements were followed by hours of testimony by the hearing’s main speaker, Schools Chancellor Richard Carranza.

“If we are to advance equity now,” Carranza said, referring to greater diversity in the city’s strongest schools, “we must eliminate the single test for specialized high schools now.”

Much of the hearing, however, was about making all of the city’s public schools more diverse. Regarding that, the chancellor kept referring to a committee the Dept. of Education set up to explore ways to desegregate.

“We're going to be meeting with the school diversity advisory council,” Carranza testified, “and we want to share with them, but there are a number of recommendations we are prepared to adopt.”

“It's disrespectful to keep answering questions like that to the separate branch of government that or job is to hold oversight over you," Johnson said, saying that it overlooks actions and requests of the City Council. “So please don't answer the questions that way. It's not a way to work together.”

“With no new investment on all of the issues that we know work and have mattered to this council it is disrespectful from this administration in the budget process," he said.

Wednesday’s hearing was before the council’s education committee. The full council is not expected to vote on measures regarding the SHSAT or K through 8 funding for weeks or even months.