School memorializes slain teacher, while the husband accused of killing her has unusual court appearances 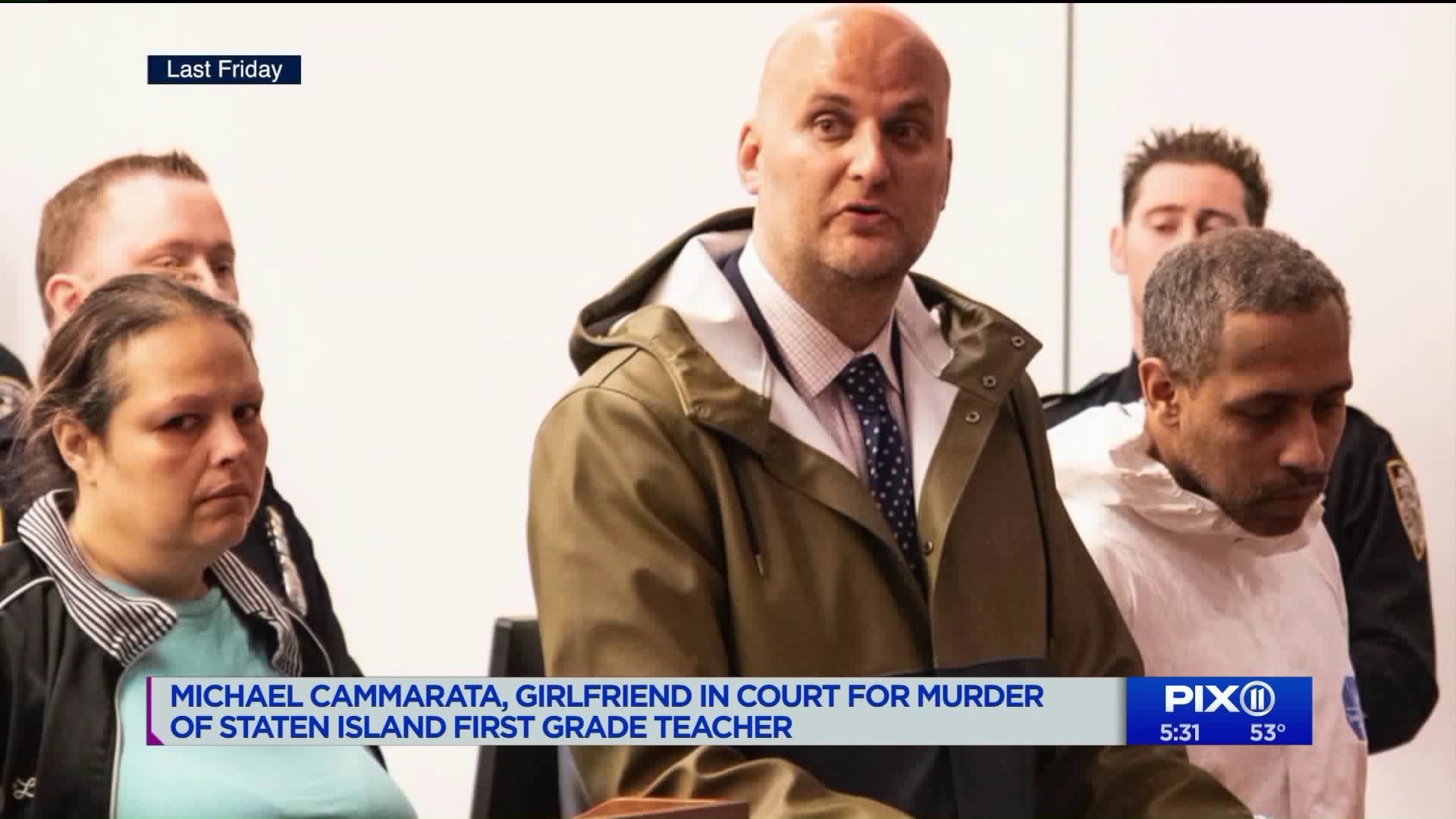 Faculty and staff showed support for Jeanine Cammarata, a first grade teacher who was killed. Her estranged husband, Michael Cammarata, and his girlfriend Ayisha Egea, were arrested for the killing, and for burning Jeanine Cammarata`s body and trying to conceal the body in a storage unit.

CASTLETON CORNERS, Staten Island —  The estranged husband and primary suspect in the murder of Staten Island teacher Jeanine Cammarata went before two different judges on Thursday, in a series of unprecedented hearings. At the same time, the entire community of the school where she taught came together to show their support for the slain mother of three.

“Everybody's wearing purple,” said an employee at P.S. 29, on Thursday.

Asked what he’d thought about the fact that almost the entire elementary school had worn the color associated with domestic violence awareness in support of their fallen teacher, he said it was difficult to talk about. “You think of it's never going to happen.”

Faculty, staff and students at the school at which Jeanine Cammarata had taught first grade not only wore purple, they tied purple ribbons on trees and fenceposts, displayed purple flowers outside of the school, and erected a small shrine in her memory. At its center was a wooden bench painted purple, with a wooden sign posted in front of it. “In Memory Of Jeanine,” it read.

It was a message that adults and children alike said resonated throughout the school. “I think violence is bad and nobody should do that,” said Jazzlenny Ferray,” a P.S. 29 third grader.

Meanwhile, at court on Thursday morning, into afternoon, were Michael Cammarata, the teacher’s estranged husband, and his six months-pregnant girlfriend Ayisha Egea.  The two were arrested for allegedly killing and severely burning Jeanine Cammarata's body, and trying to conceal the body in a storage unit.

Their joint court appearance came in two phases.  First, they had a bail hearing in criminal court.  At that hearing, a key question caused the situation to devolve.

"What was Ms. Egea indicted for?" her attorney, Mark J. Fonte, asked in a news conference hours after his client first appeared.  He correctly noted that prosecutors had refused to answer that question at the hearing.

"Their refusal," he continued, "leads me to believe that my client was not indicted on murder in the second degree."

The prosecutor's office insisted that it did not have to disclose the charges of the indictments against Egea or Michael Cammarata. The two had been arrested for murder second degree, tampering with evidence, and concealing a human corpse.  However, what specific charges a grand jury had settled on were not disclosed in court.

That caused the criminal court judge to rule that the matter had to be heard in New York State Supreme Court, the next highest court in Staten Island, literally and figuratively.  Both prosecutors and defense lawyers went up to the second floor, from the ground floor, before a Supreme Court justice there.

She ordered Cammarata and Egea to appear at the hearing. They were brought in in khaki jumpsuits from holding cells.  Ultimately, the judge ruled that the charges did not have to be revealed in her courtroom, and she ordered the couple to be remanded until their next hearing two weeks from now, on an as yet undetermined date.

All the while, about four miles away at P.S. 29, the purple ribbons, signs, shrine, and shirts spoke volumes about people's feelings toward the woman Michael Cammarata and Ayisha Egea are accused of killing, in a suspected final act of alleged longstanding domestic violence.

In addition to the message of all of the purple displays was the message conveyed by people at the school who knew her, and mourn her tragic end.

Elizabeth Melendez, who works at the school, explained simply why she'd chosen to wear purple in Jeanine Cammarata's memory.  "It was because she was a nice person," she said.