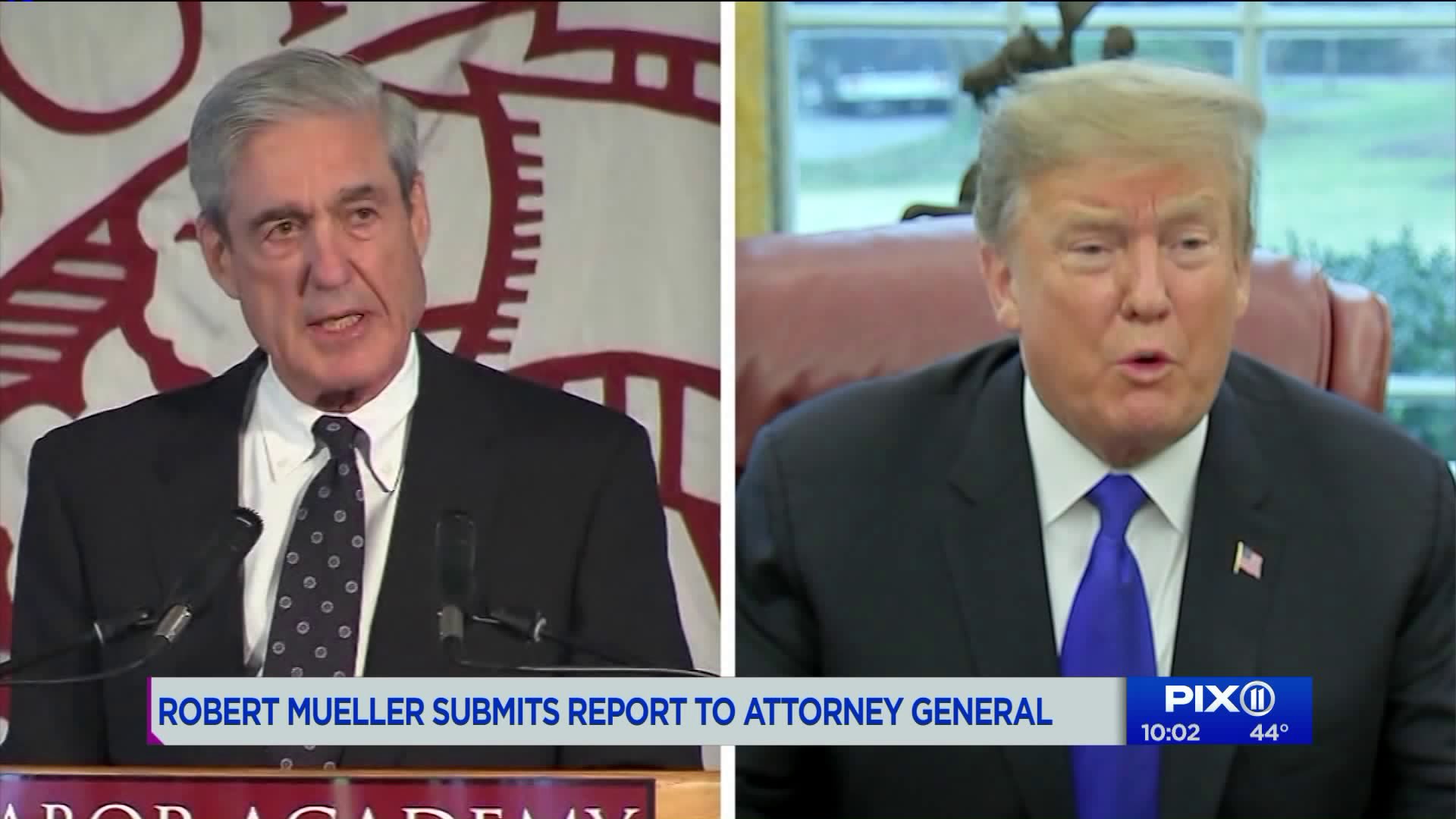 Special counsel Robert Mueller has turned in his report to Attorney General William Barr, ending his probe into the Russia collusion investigation. While the report is still confidential, there is already pressure from politicians to make the full report public.

WASHINGTON -- Special counsel Robert Mueller on Friday turned over his long-awaited final report on the contentious Russia investigation that has cast a dark shadow over Donald Trump's presidency, entangled Trump's family and resulted in criminal charges against some of the president's closest associates.

The comprehensive report, still confidential, marks the end of Mueller's probe but sets the stage for big public fights to come. The next steps are up to Trump's attorney general, to Congress and, in all likelihood, federal courts.

The Justice Department said the report was delivered by a security officer Friday afternoon to the office of Deputy Attorney General Rod Rosenstein, and then it went to Attorney General William Barr. Word of the delivery triggered reactions across Washington, including Democrats' demands that it be released publicly before long and Republicans' contentions that it ended two years of wasted time and money.

Barr released a letter noting his plans to write his own account of Mueller's findings. The White House released a statement saying it had not seen or been briefed on the special counsel's document.

"The next steps are up to Attorney General Barr, and we look forward to the process taking its course. The White House has not received or been briefed on the Special Counsel's report," Sanders said in a statement.

The next steps are up to Attorney General Barr, and we look forward to the process taking its course. The White House has not received or been briefed on the Special Counsel’s report.

Barr said he could send his account to Congress quickly.

"I am reviewing the report and anticipate that I may be in a position to advise you of the special counsel's principal conclusions as soon as this weekend," Barr said in his letter the top Republicans and Democrats on the House and Senate Judiciary committees. He pledged a commitment to transparency.

The attorney general said the Justice Department had not denied any request from the special counsel, something Barr would have been required to disclose to Congress to ensure there was no political inference in the independent probe.

With no details released at this point, it's not known whether Mueller's report answers the core questions of his investigation: Did Trump's campaign collude with the Kremlin to sway the 2016 presidential election in favor of the celebrity businessman? Also, did Trump take steps later, including by firing his FBI director, to obstruct the probe?

But the delivery of the report does mean the investigation has concluded without any public charges of a criminal conspiracy between the campaign and Russia, or of obstruction by the president. Mueller is not recommending any further indictments in the Russia probe, a Justice Department official confirmed Friday. That person, who described the document as "comprehensive," was not authorized to discuss the probe and asked for anonymity.

It's unclear what steps Mueller will take if he uncovered what he believes to be criminal wrongdoing by Trump, in light of Justice Department legal opinions that have held that sitting presidents may not be indicted.

The mere delivery of a confidential report set off immediate demands from Democrats for full release of Mueller's findings.

Now that Special Counsel Mueller has submitted his report to the Attorney General, it is imperative for Mr. Barr to make the full report public and provide its underlying documentation and findings to Congress. My statement with @SpeakerPelosi: pic.twitter.com/LCF7NXKekB

Now that Special Counsel Mueller has submitted his report to the Attorney General, it is imperative for Mr. Barr to make the full report public and provide its underlying documentation and findings to Congress. #ReleaseTheReport pic.twitter.com/v1ROpZBqZJ

The top congressional Democrats said, "The American people have a right to the truth."

Democrats also expressed concern that Trump would try to get a "sneak preview" of the findings.

"The White House must not be allowed to interfere in decisions about what parts of those findings or evidence are made public," they said in a joint statement.

Barr has said he wants to make as much public as possible, and any efforts to withhold details will prompt a tussle between the Justice Department and lawmakers who may subpoena Mueller and his investigators to testify before Congress. Such a move by Democrats would likely be vigorously contested by the Trump administration.

The conclusion of Mueller's investigation does not remove legal peril for the president. Trump faces a separate Justice Department investigation in New York into hush money payments during the campaign to two women who say they had sex with him years before the election. He's also been implicated in a potential campaign finance violation by his former lawyer, Michael Cohen, who says Trump asked him to arrange the transactions. Federal prosecutors, also in New York, have been investigating foreign contributions made to the president's inaugural committee.

No matter the findings in Mueller's report, the investigation has already illuminated Russia's assault on the American political system, painted the Trump campaign as eager to exploit the release of hacked Democratic emails and exposed lies by Trump aides aimed at covering up their Russia-related contacts. Over the 21-month investigation, Mueller has brought charges against 34 people, including six aides and advisers to the president, and three companies.

The special counsel brought a sweeping indictment accusing Russian military intelligence officers of hacking Democrat Hillary Clinton's campaign and other Democratic groups during the 2016 election. He charged another group of Russians with carrying out a large-scale social media disinformation campaign against the American political process that also sought to help Trump and hurt Clinton.

Closer to the president, Mueller secured convictions against a campaign chairman who cheated banks and dodged his taxes, a national security adviser who lied about his Russian contacts and a campaign aide who misled the FBI about his knowledge of stolen emails.

Cohen, the president's former lawyer, pleaded guilty in New York to campaign finance violations arising from the hush money payments and in the Mueller probe to lying to Congress about a Moscow real estate deal. Another Trump confidant, Roger Stone, is awaiting trial on charges that he lied about his pursuit of Russian-hacked emails ultimately released by WikiLeaks. It's unclear whether any of the aides who have been convicted, all of whom have pleaded guilty and cooperated with the investigators, might angle for a pardon. Trump has left open the idea of pardons.

Along the way, Trump lawyers and advisers repeatedly evolved their public defenses to deal with the onslaught of allegations from the investigation. Where once Trump and his aides had maintained that there were no connections between the campaign and Russia, by the end of the probe Trump attorney Rudy Giuliani was routinely making the argument that even if the two sides did collude, it wasn't necessarily a crime. The goalpost shifting reflected the administration's challenge in adopting a singular narrative to fend off allegations.

Equally central to Mueller's work is his inquiry into whether the president tried to obstruct the investigation. Since the special counsel's appointment in May 2017, Trump has increasingly tried to undermine the probe by calling it a "witch hunt" and repeatedly proclaiming there was "NO COLLUSION" with Russia. But Trump also took certain acts as president that caught Mueller's attention and have been scrutinized for possible obstruction.

One week before Mueller's appointment, Trump fired FBI Director James Comey, later saying he was thinking of "this Russia thing" at the time.

He mercilessly harangued Attorney General Jeff Sessions for recusing from the Russia investigation two months before Mueller was named special counsel, a move that left the president without a perceived loyalist atop the probe. And he helped draft a misleading statement on Air Force One as a Trump Tower meeting between his eldest son and a Kremlin-connected lawyer was about to become public.

Even as Trump blasted Mueller's team, his White House and campaign produced thousands of documents for the special counsel, and dozens of his aides were interviewed. The president submitted written answers to Mueller regarding the Russia investigation, but he refused to be interviewed.