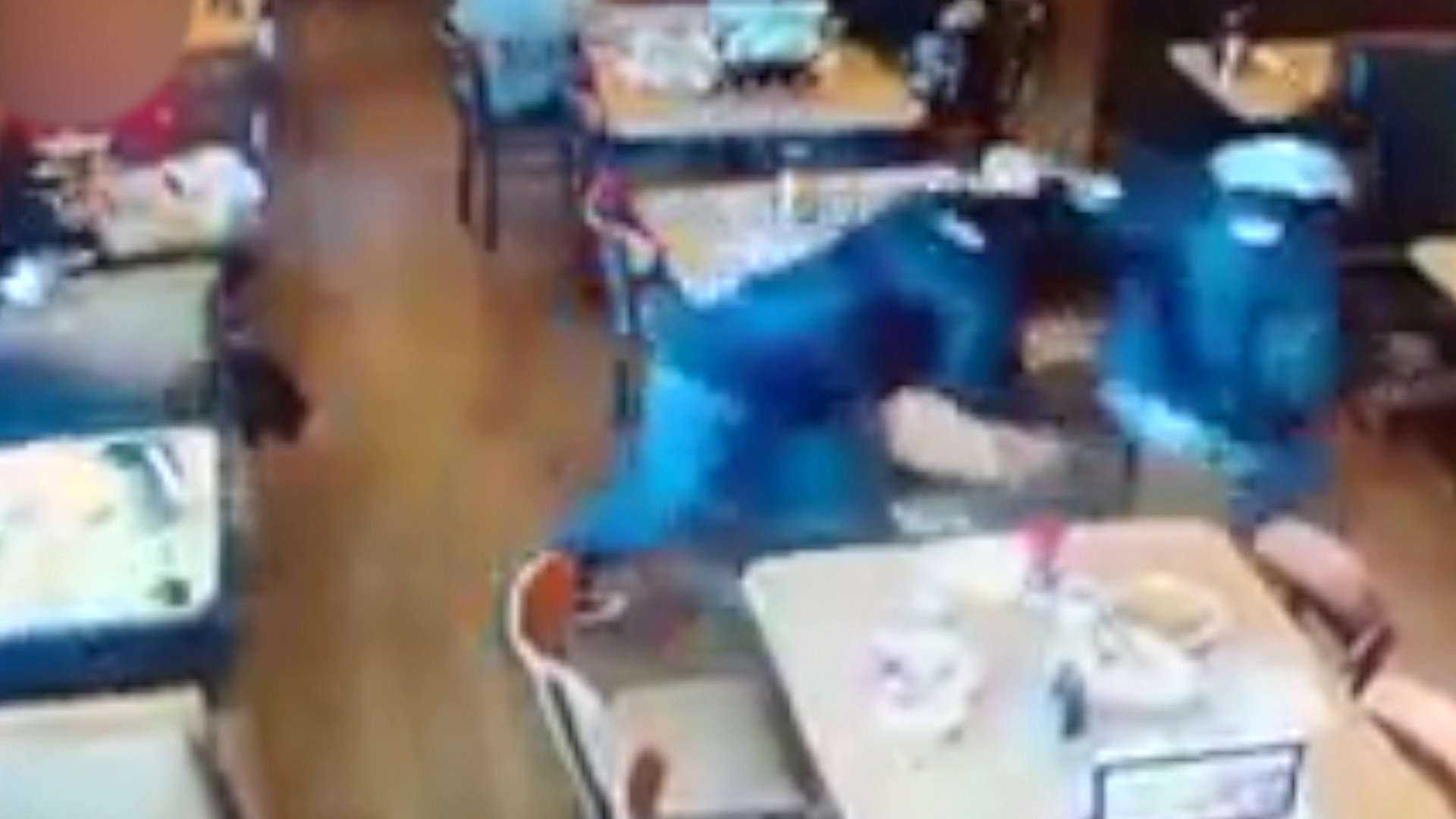 Newly released surveillance video shows the chaos that erupted inside a Long Island IHOP Monday as shots were fired, sending panicked diners to the door and the victim into a baby in a high chair at a nearby table.

RIVERHEAD, N.Y. -- An alleged Blood gang member faces an attempted murder charge in connection with a shooting that took place inside a crowded IHOP on Long Island on March 4.

Deontrae Green, 19, was arrested after he allegedly shot a man inside an IHOP restaurant on Long Island.

Deontrae Green, 19, of Islandia, is also charged with assault, criminal use of a firearm, criminal possession of a weapon and reckless endangerment.

“For this defendant to fire five rounds in a crowded restaurant with an infant nearby is nothing but depraved,” District Attorney Sini said. “He evinced a clear intent to kill the victim and showed absolutely no regard for the safety of any of the other patrons.”

Police said the shooting stemmed from a dispute between Green and 20-year-old Tyriek Corbin, of Amityville --- alleged gang rivals.

Green was sitting in a booth in the restaurant on Portion Road in Lake Ronkonkoma, when two alleged gang rivals approached his table just before 1:30 p.m.

Video shows Green pulling out a gun and firing multiple shots at the two men. Corbin was shot at least once.

At least 23 additional patrons were inside the restaurant at the time, including a family with a baby in a high chair directly across from where the shooting took place, officials said.

After being shot, video shows Corbin stumbling away from the gunman and falling into the baby sitting in the high chair. A panicked woman is seen grabbing the baby into her arms as the second man also falls into the chair.

“The minute the victim crosses the defendant’s path, the defendant takes out his firearm and violently shoots five times,” District Attorney Sini said. “The victim is struck once and is pushed back into that infant. You can see on the surveillance video that the infant’s forehead almost crashes into the table. Imagine for a moment being that family: you’re eating pancakes one moment, gunfire erupts, and your infant is almost trampled by an individual.”

A bullet fragment was later found in a woman’s sweater, but it did not penetrate her skin, police said.

Corbin later arrived at a local hospital in a private vehicle, and had surgery for non-life threatening injuries.

“While the patrons were fleeing the restaurant trying to get to safety, and the defendant himself was fleeing, our first responders in the Suffolk County Police Department responded in force and they responded quickly,” District Attorney Sini said. “I would like to commend the Police Department for their incredibly swift and sweeping response to this incident.”

Green fled the scene on foot and was apprehended by police at approximately 1:38 p.m. on Patchogue Holbrook Road.

Suffolk County Police Canine Section officers recovered the handgun from a wooded lot located near 321 Portion Road. Video surveillance revealed that Green had been in the vicinity of the lot after fleeing the IHOP.

“We are focused on investigating and prosecuting violent street gangs, whether it’s MS-13, the Bloods, or any other gang,” District Attorney Sini said. “We are working tirelessly with our law enforcement partners on the local level, the state level and the federal level to ensure that we disrupt this cycle of violence and take violent gang members off of our streets.”

Green was arraigned on the indictment today by Suffolk County Supreme Court Justice Mark Cohen. Bail was set at $750,000 cash or $1.5 million bond.

Green is due back in court on April 3.