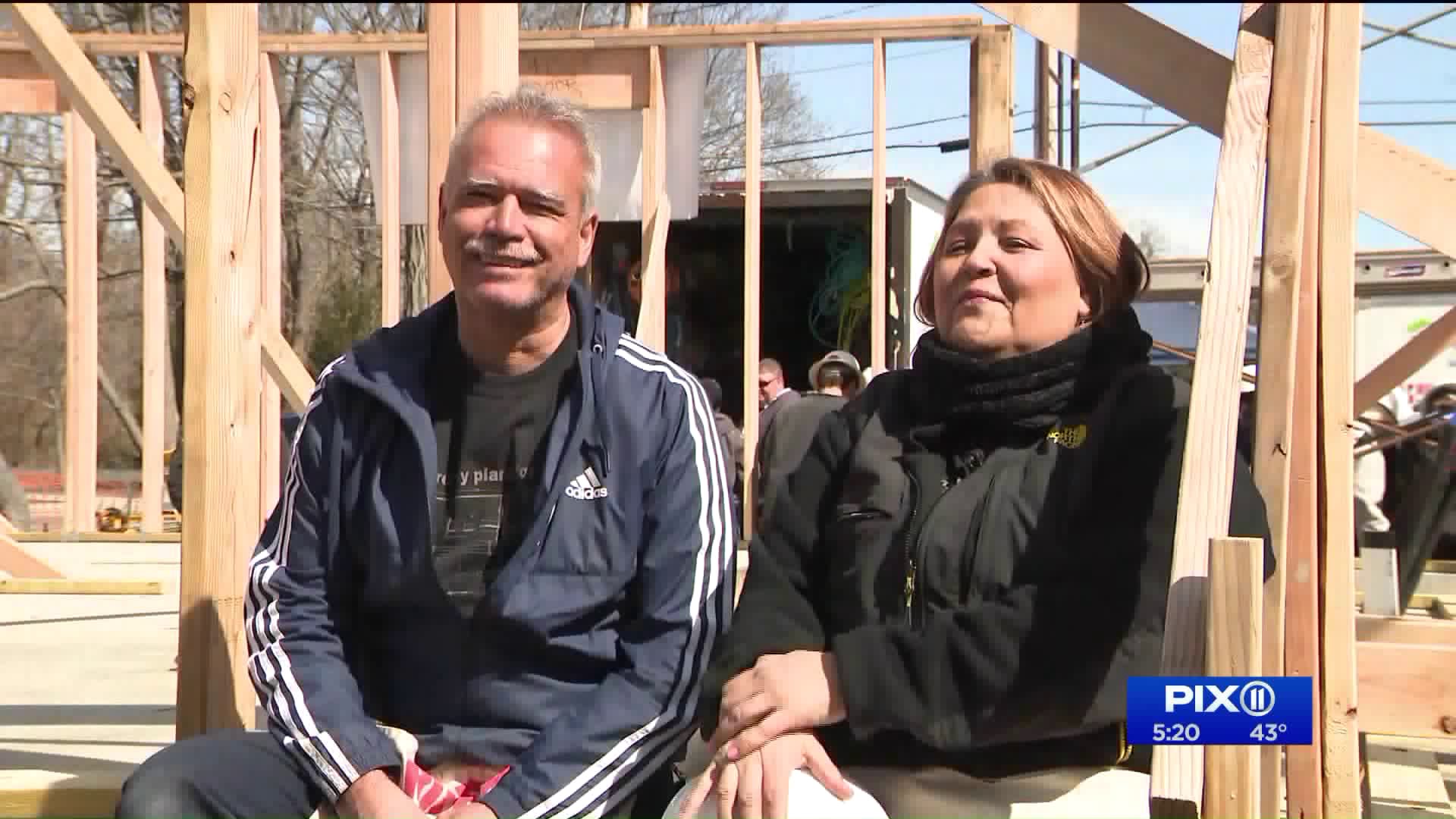 The Velasquez family of Long Island is getting a new, energy-efficient house thanks to Habitat for Humanity of Suffolk, and their own 300 hours of work on their future home. Despite what people might think, they aren`t simply given the home - The family pays the organization a mortgage for the construction, but at $100,000 (and no interest) over 30 years, it`s much less than their current rent.

MASTIC BEACH, Long Island — Since 1976, Habitat for Humanity has built 800,000 homes worldwide. Of them all, one now stands out, with its first formal day of construction in Long Island on Wednesday.

"If you pump the pipes underground," said site supervisor Ryan Parsons, in a walk-through of the home with PIX11 News, "it's able to take the energy from the ground, and run it through a heat exchanger indoors."

He was demonstrating one of the multiple reasons that the home, on Bayview Drive, is remarkably environmentally-friendly.

It has a geothermal heating and cooling system, donated by ZBF Geothermal, buried 12 to 18 feet under its backyard, Parsons said. At that depth, the ground has a constant temperature in the mid-50 degree Fahrenheit range.

"So you're only taking 55-degree air," said Parsons, "and making it 70 [inside the house], instead of taking 15-degree [outside] air and trying to make it 70 in the winter.  Vice versa in the summer."

Also, the frame of the house is not made up of two-by-fours, like most home construction.  Instead, each wooden beam is two-by-six inches.  Each beam makes up the outer wall of the home, making the walls a half foot deep.  That, in turn, allows the outer wall insulation to be half again thicker than average homes.

In addition, the home will have a specialized septic system, obtained by a partnership with Infiltrator Water Technologies, which is less toxic than a normal septic tank. Habitat also anticipates that solar panels will be donated for the home, which would for all practical purposes take the structure off the electrical grid.

The combination of building features makes the Long Island home the most energy-efficient Habitat home ever.

"We had no idea of everything that was going to be in here until today," said Betty Velasquez, the new owner of the home.

When it's completed, in about a year, it will have two floors, including four bedrooms, and one and-a-half baths.

"We always say, 'God is in control,'" Velasquez said, sitting next to her husband, Humberto, and son, Fabian, on temporary steps behind their future home.

The family is required, by Habitat rules, to put in at least 300 hours of work building their home.  Far more work than that is required for construction. Almost all of that labor is provided by volunteers.  On Wednesday, the construction crew was helped by about two dozen juniors and seniors from Elwood-John H. Glenn High School.

Labor typically is the highest cost of home construction. Since the Velasquezes’ labor cost is zero, it keeps the overall housing cost low.

A common misperception about how Habitat for Humanity works is that the family and volunteers build the home, and, when the work is completed, the home is handed over fully to the family. In fact, Habitat home ownership is very different.

The family actually buys their home. They pay for construction – about $100,000 in the Velasquezes’ case.

Like most Habitat families – and most other homeowners – they'll take out a mortgage.  However, in the case of Habitat families, the loan comes from Habitat for Humanity, which charges zero interest.

Habitat families are usually working families, like the Velasquezes.  Humberto Velasquez has worked for 30 years at a banner printing business.  The rent on his family's current apartment has risen so high that they thought they'd have to move away from Long Island, which they've called home since the 1980s.

Their new home, and its financing, lowers their monthly costs to below what they've been paying for rent.

"We feel like millionaires," joked Mrs. Velasquez. "We're like, 'Don't wake me up,'" she said pinching herself.