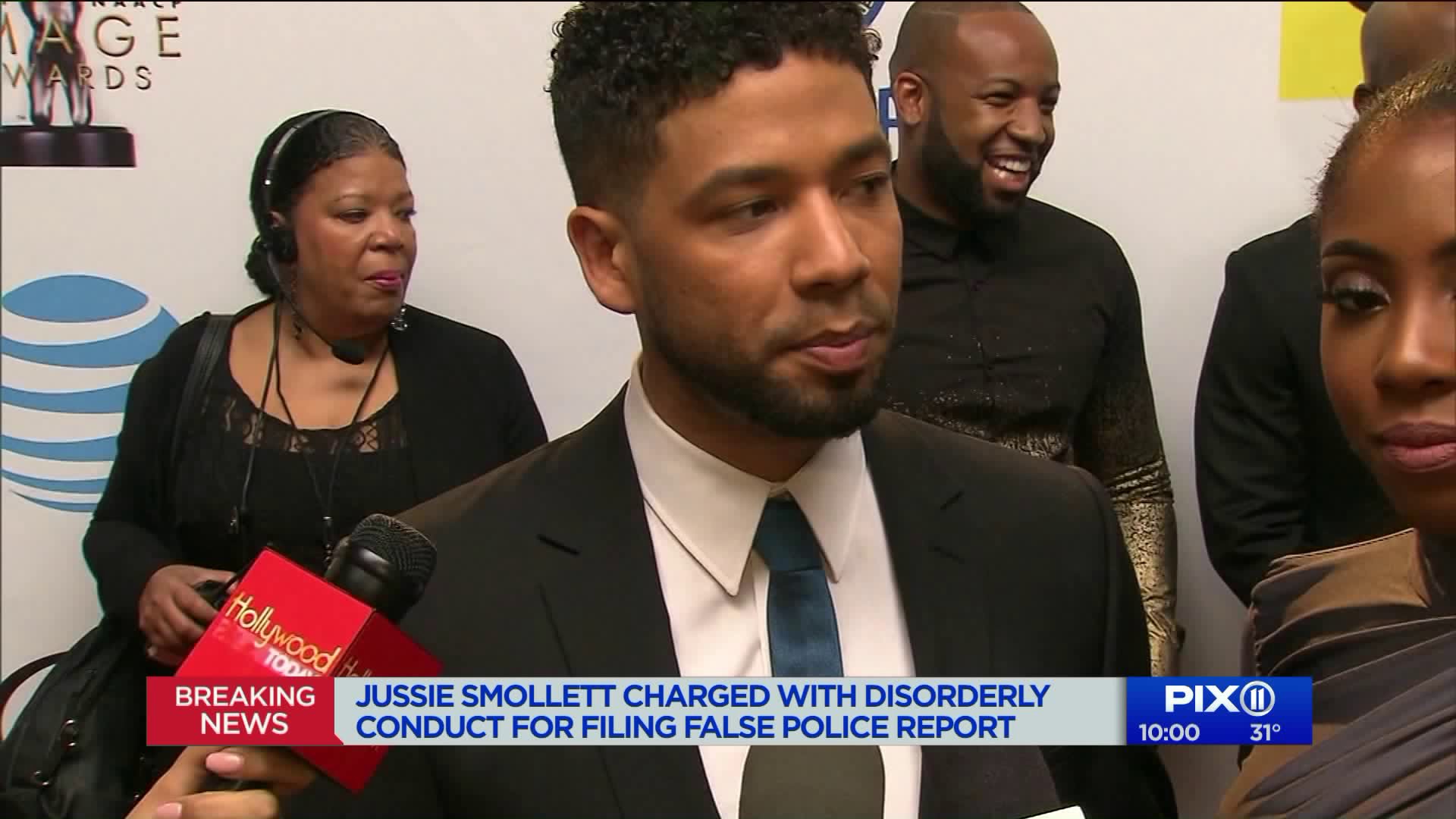 Earlier on Wednesday, Smollett "officially classified" a suspect in a criminal investigation for allegedly filing a false police report, according to a tweet from Chicago police spokesman Officer Anthony Guglielmi.

A Cook County grand jury was hearing evidence just weeks after the young actor reported being the victim of a hate crime on January 29, the police spokesman said. Filing a false police report is a Class 4 felony.

Smollett's transformation from victim to suspect in a reported crime that captured national headlines came on the same day that a high-ranking police source said Chicago detectives were working to obtain the actor's financial records.

Investigators also have sought to ask the actor additional questions about the attack.

CNN was reaching out to Smollett's attorneys for comment.

His attorneys met with Cook County prosecutors earlier in the day, according to police spokesman Tom Ahern. But a source close to actor's team told CNN that he has not given police a follow-up interview and no such meeting is scheduled.

Smollett told authorities that two men attacked him, putting a rope around his neck and pouring an unknown chemical substance on him.

The actor denies playing a role in his attack, according to his attorneys.

In a statement before Smollett was named a suspect, 20th Century Fox Television, which produces the series "Empire" on which Smollett appears, and Fox Entertainment expressed support for the actor.

"Jussie Smollett continues to be a consummate professional on set and as we have previously stated, he is not being written out of the show," the statement said.

Two law enforcement sources with knowledge of the investigation have told CNN that police believe Smollett paid two brothers to orchestrate an assault on him.

The brothers, who were arrested and released in connection with the attack, met Tuesday with police and prosecutors at a Chicago courthouse, Ahern said. The county's top prosecutor, Cook County State's Attorney Kim Foxx, has recused herself from the investigation, according to a spokeswoman from her office.

The men -- whom attorney Gloria Schmidt identified as Olabinjo Osundairo and Abimbola Osundairo -- were arrested February 13 but released without charges Friday after police cited the discovery of "new evidence." The two are no longer suspects at this time, Chicago police have said.

In a joint statement issued to CNN affiliate WBBM, the men said: "We are not racist. We are not homophobic, and we are not anti-Trump. We were born and raised in Chicago and are American citizens."

Anne Kavanaugh of Media Pros 24/7, a media consulting firm representing Smollett, released a statement this week, saying in part, "Smollett's attorneys will keep an active dialogue going with Chicago police on his behalf."

The police sources said that the brothers are cooperating with law enforcement and said that records show they purchased the rope found around Smollett's neck at a hardware store in Chicago.

"As a victim of a hate crime who has cooperated with the police investigation, Jussie Smollett is angered and devastated by recent reports that the perpetrators are individuals he is familiar with," the statement said.

"He has now been further victimized by claims attributed to these alleged perpetrators that Jussie played a role in his own attack. Nothing is further from the truth and anyone claiming otherwise is lying."

Smollett is openly gay and since 2015 has played the gay character of Jamal on the Fox TV drama "Empire."

The actor told detectives two men attacked him near the lower entrance of a Loews hotel in Chicago, according to police spokesman Guglielmi. Police were told the two men yelled, " 'Empire' fa***t" and "'Empire' n***er,' " while striking him.

In a supplemental interview with authorities, Smollett confirmed media reports that one of the attackers also shouted, "This is MAGA country," a reference to President Donald Trump's "Make America Great Again" campaign slogan.

The day after last month's incident, police released surveillance images showing two silhouetted individuals walking down a sidewalk, and police said they were wanted for questioning.

Police late last week said the men were being viewed as "potential suspects." But by Friday night they had been released, Guglielmi said.

One of the men has appeared on "Empire," Guglielmi said. A police source also told CNN on Friday night that the men had a previous affiliation with Smollett but did not provide additional details.

Seven days before the alleged attack, a letter containing white powder was sent to the Chicago set of "Empire," police have said. Authorities determined the powder to be aspirin, according to Guglielmi.

The image of the letter and envelope, shared with CNN by a person close to Smollett, includes a message apparently cut from magazine clippings, and a stick figure drawing.

Smollett told ABC News the drawing was of a "stick figure hanging from a tree which had a gun pointing towards it." The letter, addressed to Smollett, includes the word "MAGA" on the outside of the envelope in place of the return address.

More than a decade ago, Smollett pleaded no contest to providing false information to law enforcement in a 2007 misdemeanor case, according to Frank Mateljan, a spokesman for the Los Angeles City Attorney's Office.

The case stemmed from a DUI stop in which Smollett gave police the wrong name.

Smollett also pleaded no contest to driving with a blood alcohol level over the legal limit and driving without a valid driver license.

He was sentenced to two years of probation and paid a fine, according to Mateljan.

Smollett expressed frustration about not being believed

Smollett gave his first detailed account last week of what he says was a hate crime against him, and the aftermath, in an interview with ABC's "Good Morning America."

"It feels like if I had said it was a Muslim or a Mexican or someone black I feel like the doubters would have supported me a lot much more," Smollett said. "And that says a lot about the place where we are as a country right now."

Smollett said that one of the attackers shouted, "This is MAGA country," before punching him in the face. But he denied reports that said he told police the attackers wore "Make America Great Again" hats.

"I never said that," he told ABC's Robin Roberts in an interview that aired February 14. "I didn't need to add anything like that. They called me a f****t, they called me a n****r. There's no which way you cut it. I don't need some MAGA hat as the cherry on some racist sundae."