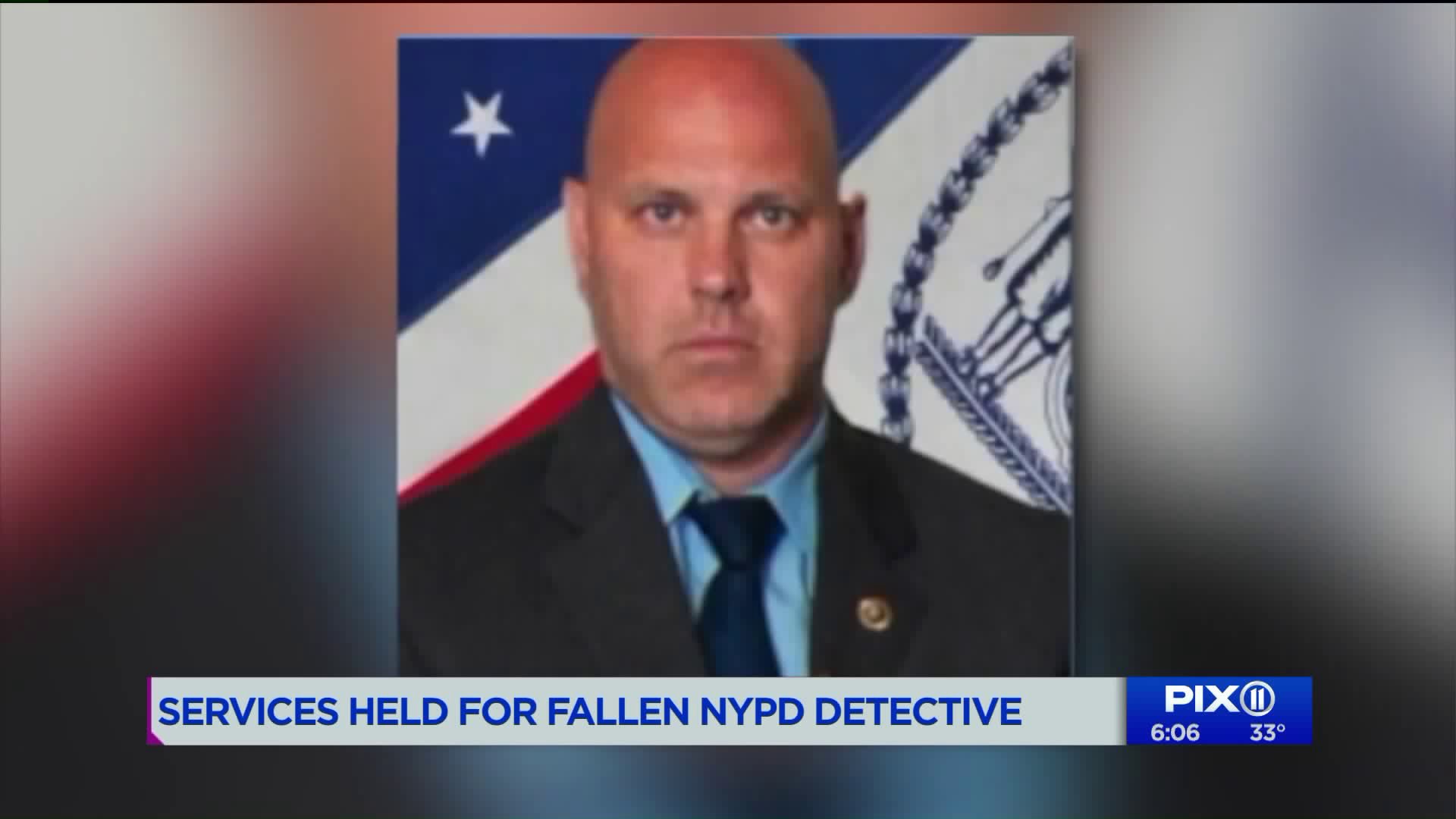 On this, the second of two days of the wake, Mayor Bill De Blasio joined hundreds of mourners from the NYPD, as well as from Suffolk County... and Nassau County Police, including top brass from those departments. Simonsen was a key member of the one-oh-two precinct in Queens, but was a lifelong Long Islander.

Among people offering their condolences were New York's mayor and police commissioner, but visits to the wake on Tuesday by two people who can closely relate to Simonsen and his family had particular resonance.

Tuesday's wake was in two parts, from 2-4 p.m. and then from 7-9 p.m. Detective Simonsen's wife and family arrived about an hour before the wake in order prepare for the hundreds of mourners who would pay their respects. One of the first visitors, though, really stood out.

Entering St. Rosalie Roman Catholic Church in a wheelchair was NYPD Sgt. Matthew Gorman. He was Simonsen's partner and, like Simonsen, got hit by a bullet in the crossfire when police in Richmond Hill Queens last week shot at a robbery suspect whom they said had pointed a realistic imitation gun at them. The gunfire killed Detective Simonsen, and left his partner to mourn his loss with Simonsen's family. It was Sgt. Gorman's second day attending his partner's wake.

"You see the inner strength that he has," said Pat Lynch, the president of the Patrolmen's Benevolent Association, the union for NYPD police officers. "Even while he's recovering from a gunshot wound, he found the time to come out here in the cold to show respect for this police officer. That's what police officers do."

Mayor Bill De Blasio arrived mid-afternoon, joining hundreds of mourners from the NYPD, as well as from the police departments of Suffolk and Nassau Counties. The respective departments' top brass were in attendance. Simonsen had been a key member of the 102nd precinct in Queens, but was a lifelong Long Islander.

The leadership from his own department: NYPD Police Commissioner James O'Neill, Chief of Department Terence Monahan, and Chief of Detectives Dermot Shea, all came. On the way in to the church, they encountered and spent a moment speaking with the family of Wenjian Liu, the officer who, along with his partner Rafael Ramos, was ambushed and killed while on duty in December 2014.

"I must be here to support the family," Liu said, after leaving the church. "I want them to know they are not alone, and we'll always be with them."

Detective Simonsen's funeral is at 10 a.m. on Wednesday.