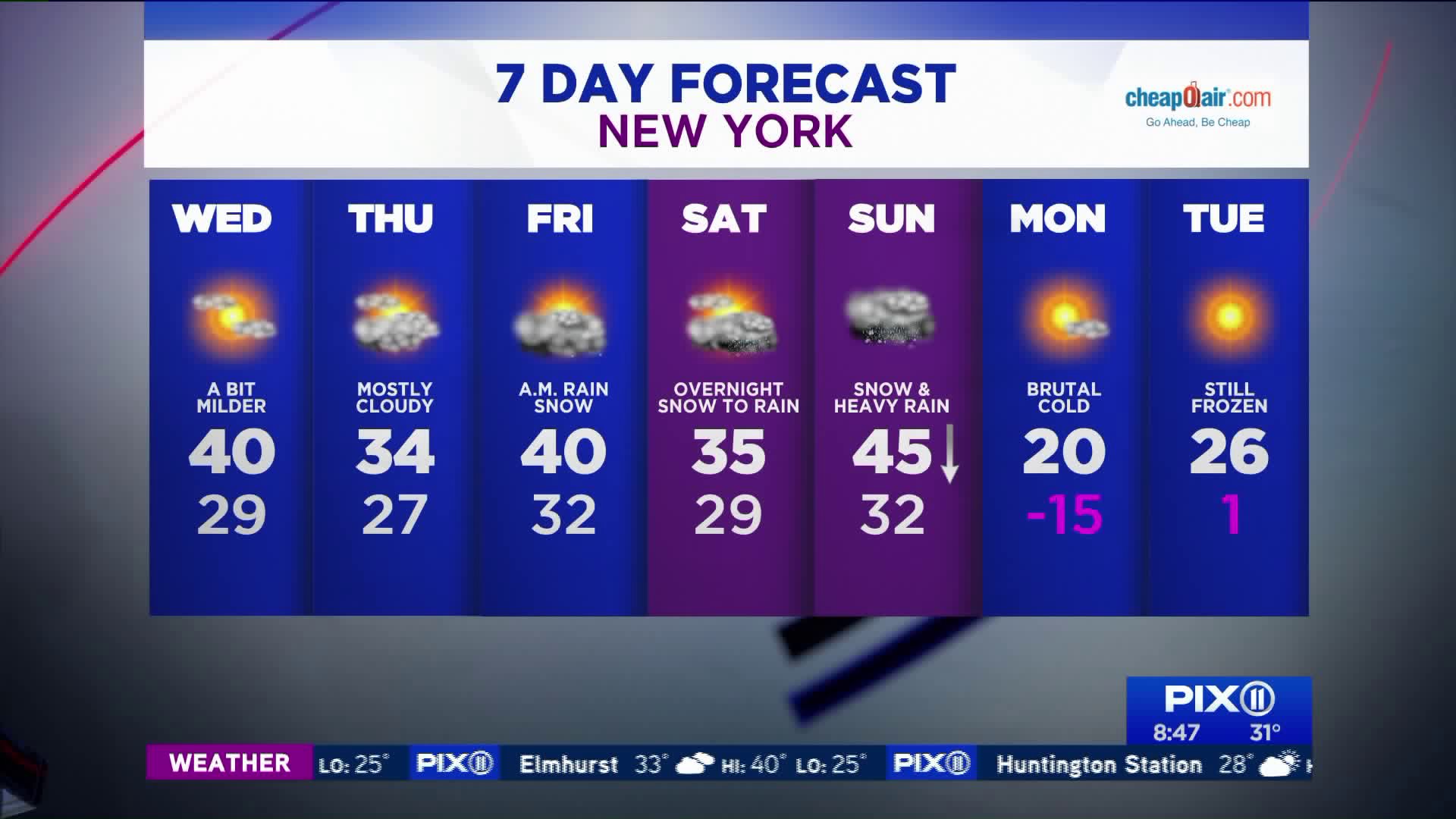 A taste of winter is on the horizon as two storm system are expected to pass through the tri-state region in the coming days.

A taste of winter is on the horizon as two storm systems are expected to pass through the tri-state region in the coming days.

The National Weather Service calls the system "quick moving" and says the region is expected to get light snowfall Thursday night and into Friday morning before changing into rain.

Thursday's snow will be coupled with chilly temperatures, with a high of 34 in the city, mid 30s in the suburbs.

A quick moving system will bring a light accumulating snowfall to much of the region Thursday night into Friday morning before changing to rain. Travel will be hazardous due to poor visibility & snow covered roads, particularly across the interior for the Friday am commute. pic.twitter.com/b1SJGLqxvL

Friday will begin cloudy with light rain over NYC and light snow over the northern and western suburbs. The NWS predicts 1 to 2 inches of snow accumulation far east and 2 to 3 inches in far northwestern sections.

At the end of the week, "travel will be hazardous due to poor visibility and snow covered roads, particularly across the interior for the Friday am commute," the NWS warns.

The precipitation will gradually come to an end by late Friday morning then skies will become mostly sunny by afternoon. The high temperature increases from Thursday and is expected to reach 40 in the city, low 40s in the suburbs.

Saturday begins partly sunny followed by increasing clouds during the afternoon, with high temperatures of 35 in the city, mid 30s in the suburbs.

Then by Saturday night, partly cloudy skies will once again develop into snowfall by midnight.

The snow will continue through the overnight hours and begin changing to rain over NYC and over Long Island and coastal New Jersey. The low temperature will be 32 in the city, low 30s in the suburbs.

Sunday will be cloudy with rain and snow continuing as a strong area of low pressure will move through the area. Total accumulations will depend on the exact track of the storm system.

Highest accumulations will be north and west of the city. Temperatures will warm into the mid-40s over NYC, Long Island, and coastal New Jersey.

Sunday night and Monday will see clearing skies and frigid temperatures as arctic air will invade the area toward the early morning hours of Monday.

This will be the coldest air of the season so far with high temperatures only reaching new 20 degrees and wind chill temperatures well below zero. Any standing water from the weekend storm will quickly freeze making driving hazardous in some spots.