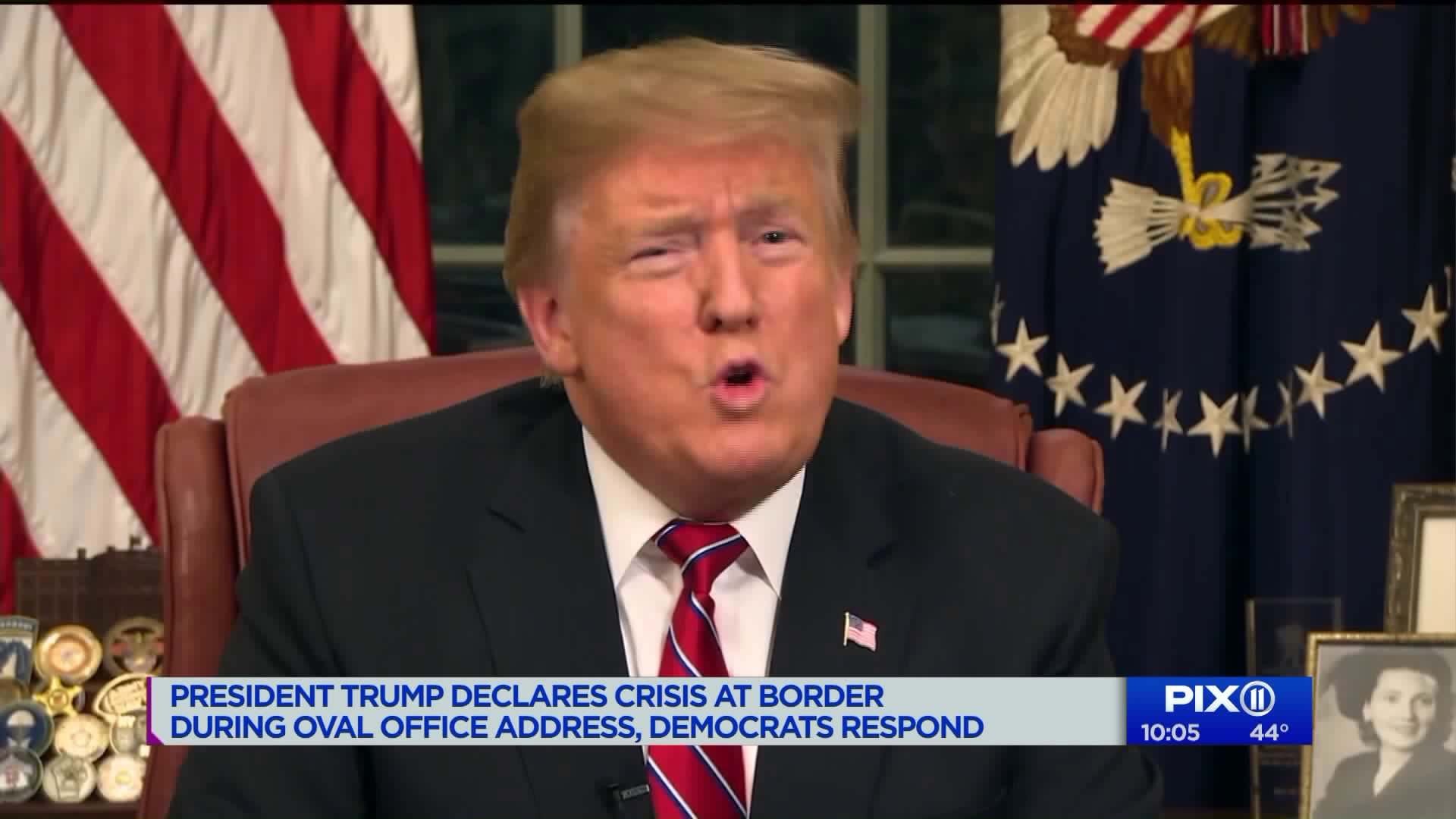 Addressing the nation from the Oval Office for the first time, President Trump argued for funding on security and humanitarian grounds as he sought to put pressure on newly empowered Democrats amid an extended partial government shutdown.

Only minutes after President Donald Trump gave his first prime-time address from the Oval Office, House Speaker Nancy Pelosi and Senate Democratic leader Chuck Schumer took to the airwaves to blame him for the partial government shutdown, which has now stretched to its 18th day, the second-longest ever.

The back-to-back speeches deepened the sense that a solution won't present itself anytime soon, revealing yet again the lack of support on Capitol Hill for Trump's wall -- and the President's rigid response to the Democrats' unwillingness to haggle.

"President Trump must stop holding the American people hostage, must stop manufacturing a crisis and must reopen the government," Pelosi said.

For weeks, the President and congressional Democrats have been at an impasse over his demand for $5.7 billion in federal funding to build a wall on the US-Mexico border. Last year, Congress passed most of its spending bills, but 25% of the federal government's spending has lapsed during the fraught negotiations.

About 800,000 federal workers are not getting paid during the shutdown, which affects the Departments of Homeland Security, Justice, Agriculture, Treasury, State, Interior, Transportation, Commerce, and Housing and Urban Development, as well as agencies like the Food and Drug Administration, Environmental Protection Agency and Internal Revenue Service.

Last week, the Democratic-controlled House passed bills to reopen the government without funding for the wall, which Pelosi has called "an immorality."

On Tuesday, Pelosi and Schumer urged Trump to sign them.

"Democrats and the President both want stronger border security," he added. "However, we sharply disagree with the President about the most effective way to do it."

But expecting Trump to veto them, Senate Majority Leader Mitch McConnell has not brought the House bills up for a vote. On Tuesday, the Kentucky Republican said on the Senate floor that the whole fight is over "one-tenth of one percent of federal spending" and pointed to a vote in 2006 in which Democrats supported building physical barriers at the border. "This is no newfound, principled objection," McConnell said. "It's just political spite."

Yet as the shutdown has dragged on, some Republican senators have split from their party's strategy and announced support for funding the government without money allocated to build the wall. The majority of the public has opposed the wall and blamed Republicans for the shutdown, according to polls.

It's unclear how the spending fight will get resolved. On Tuesday evening, Trump said that what was immoral was "to do nothing and to continue to allow innocent people to be so horribly victimized."

He has considered declaring a national emergency to circumvent Congress and get the military to build the wall -- an action that would surely be challenged in the courts.

While there were about 416,000 apprehensions at the US-Mexico border in the first 11 months of 2018, the most since 2014, that was many fewer than in most years of the preceding three decades, according to the Pew Research Center.