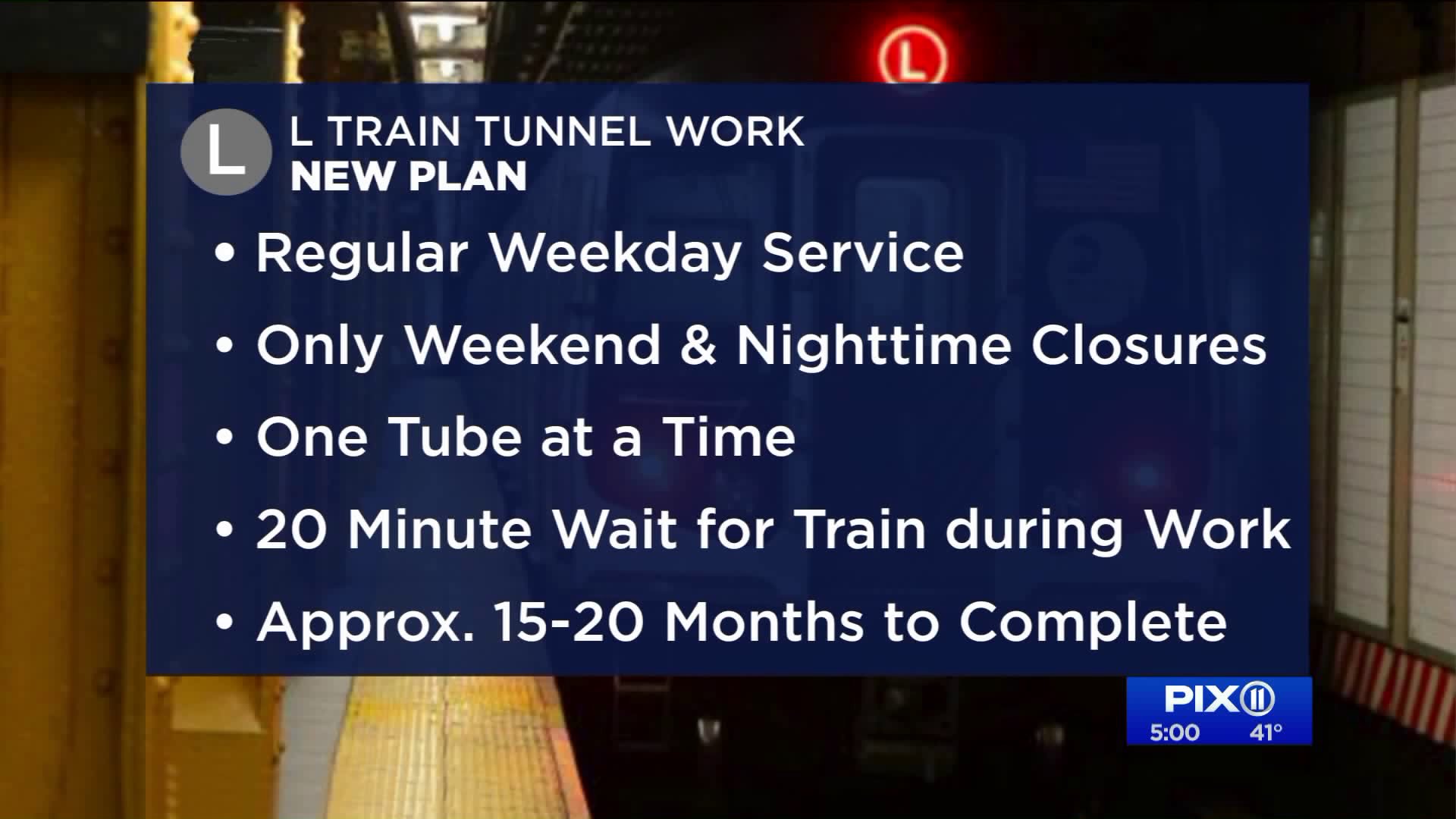 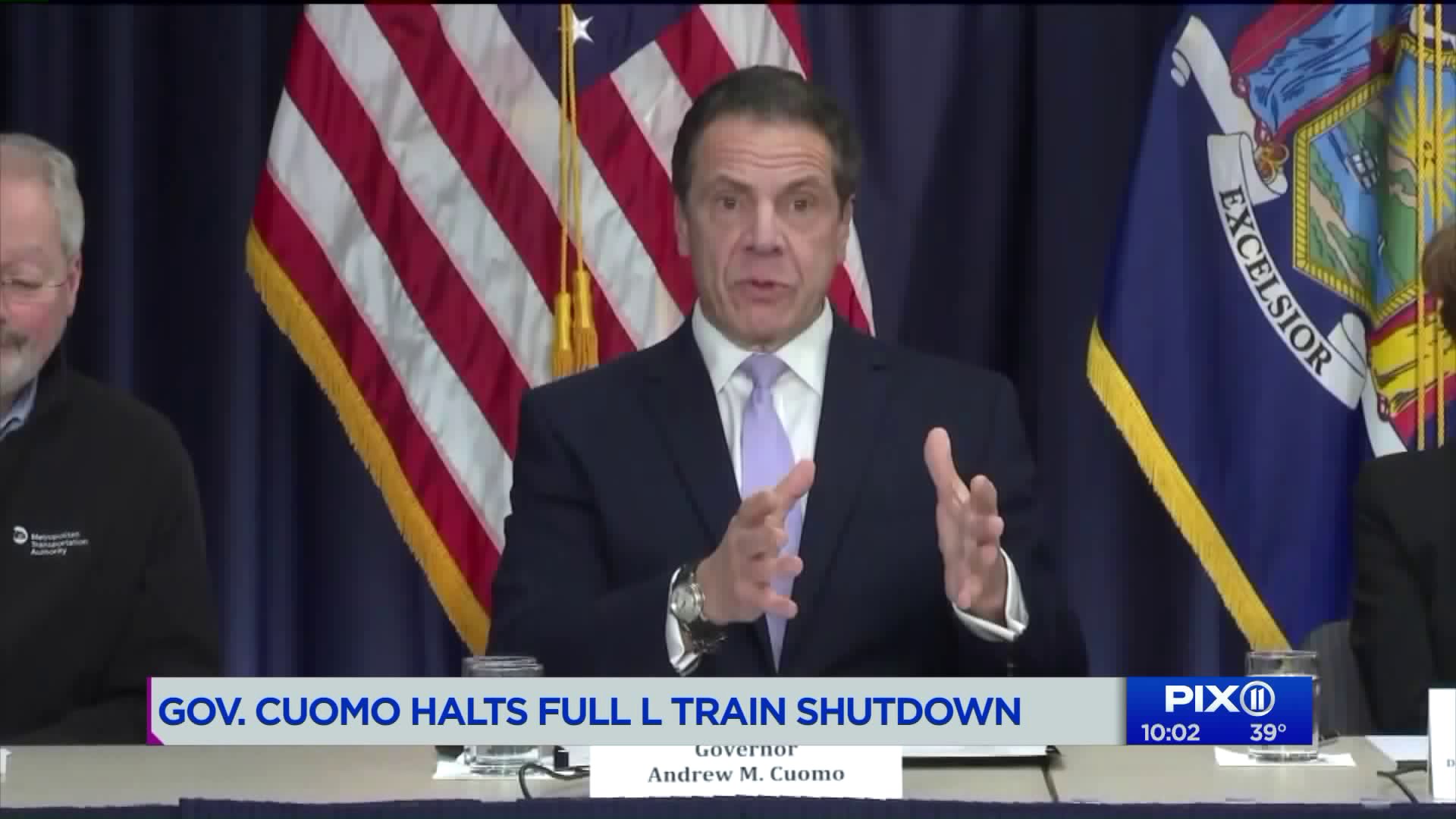 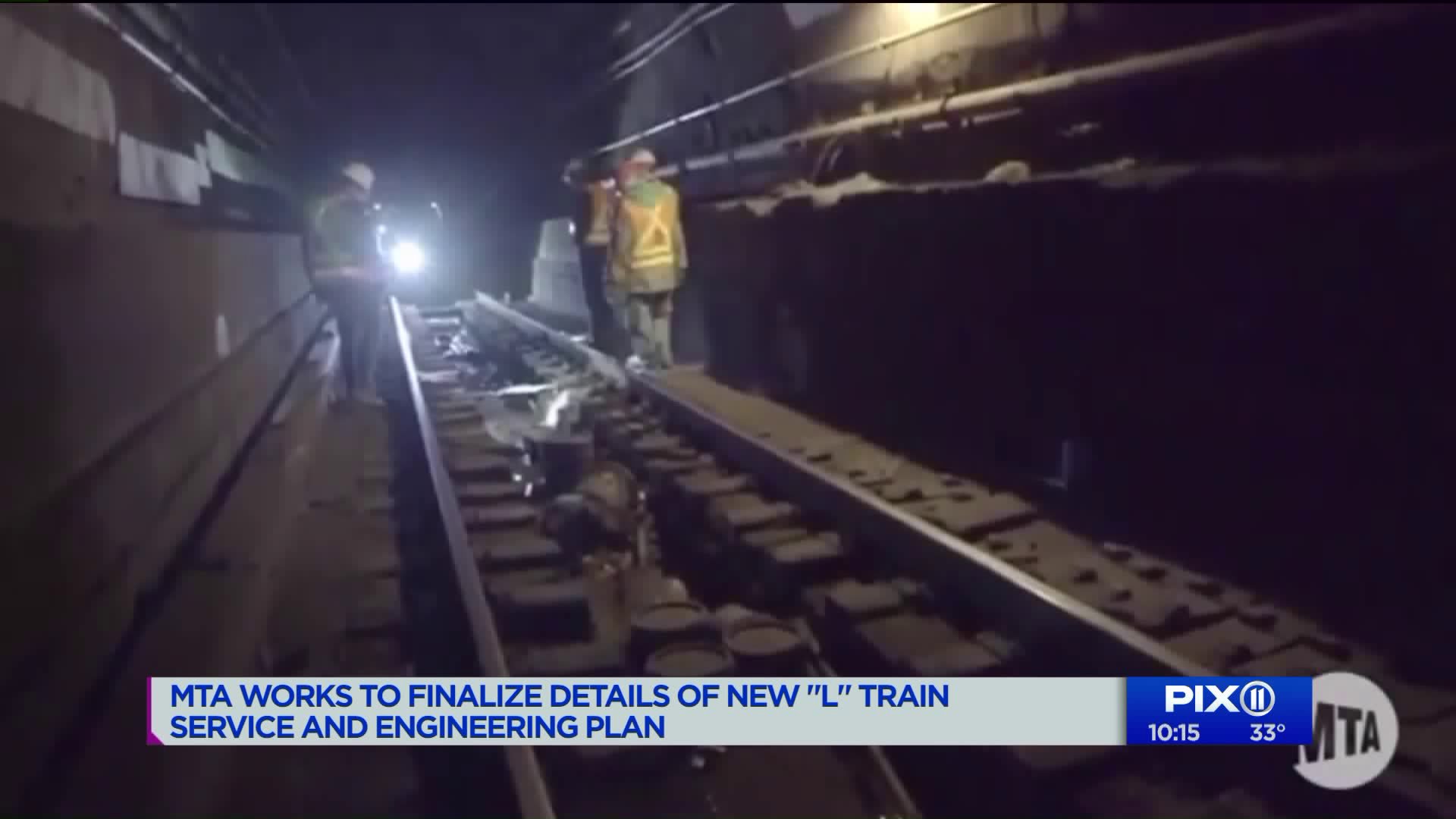 NEW YORK — A full shutdown of the L train between Brooklyn and Manhattan has been canceled. Details are being finalized by MTA officials.

MTA NYC Transit President Andy Byford says he and staff members are doing "due diligence" to review the recommendations this week.

The 15-month closure was set to begin in April in order to repair damage caused by Superstorm Sandy in 2012. At a media briefing Thursday, Governor Andrew Cuomo made the announcement at his midtown office with the MTA's Acting Chairperson and engineering experts.

Transit President Byford says bus shuttles will probably still be utilized as travel during the overnight and weekend work is also a busy time. He is still working with NYC DOT about plans along 14th Street.

Byford believes the project can be done in one tunnel at a time, during overnight and weekend hours, in around 15 to 20 months.

Cuomo consulted a panel of "the best experts we could find," and they came up with a “highly innovative but feasible” alternative, Cuomo said Thursday. The Governor toured the work site, known as the Canarsie Tunnel, in December with engineers from Cornell and Columbia.

MTA Committees and the full Board have a regularly scheduled meeting the week of January 22nd.

The original L train tunnel project had been years in the making and was created with public comment and dozens of open houses.

Following the Thursday announcement, transit officials met to review the recommendations and look at new service and engineering plans. MTA staff accompanied the engineering representatives on the tour with the Governor in December.

The new design has been used in Europe and in other systems, but never the United States or during a tunnel restoration project, according to Cuomo.

The engineering experts spoke at the surprise press conference. Other people who have worked on infrastructure projects say this could signal a new approach to transit projects.

Supporters believe the same level of repair work can be done.

MTA Transit President Byford says the experts believe the new approach to the repairs will have life span of 40 to 50 years.

The bench wall, which runs along the tunnel, will be reinforced with a new polymer. Any damaged sections will be removed and replaced.

Many people questioned the turn-of-events four months before it was set to start and after years of planning.

Mayoral spokesperson Eric Phillips called it great news "so long as this new strategy proves to be real.

"But like everyone else, the Mayor thinks the MTA has some real explaining to do about how it has handled this for the last few years," Phillips said. "This is certainly no way to run a railroad."

Byford says the ideas were considered previously, but the experts brought the plans together with new approaches.

"If this new plan is as good as advertised, then obviously it is fantastic news for the hundreds of thousands of L train riders who were dreading the shutdown, as well as for those who were worrying about the shutdown’s spillover effects,” Johnson said. “That said, I’m having a tough time with this. For years, the MTA told New Yorkers that a shutdown was unavoidable. Now, at the last minute, we’re presented with a new proposal with no details on cost or a solid time frame. All New Yorkers, including those who uprooted their lives and businesses in anticipation of the shutdown and the workers who rely on the L train during nights and weekends, deserve better."

Cuomo and experts discuss the project:

Cuomo previously promised not to close the train if better options were found:

“I mean, I can’t tell you the number of people in Brooklyn who have come up and said... looked me right in the eye and said, ‘are you sure that there is nothing else that can be done and there’s no way you can possibly shorten this?’ ” Cuomo said last month. “I said, ‘I will make sure that, personally, that there’s nothing else that can be done, and this is the best option.’ And I want to do that."