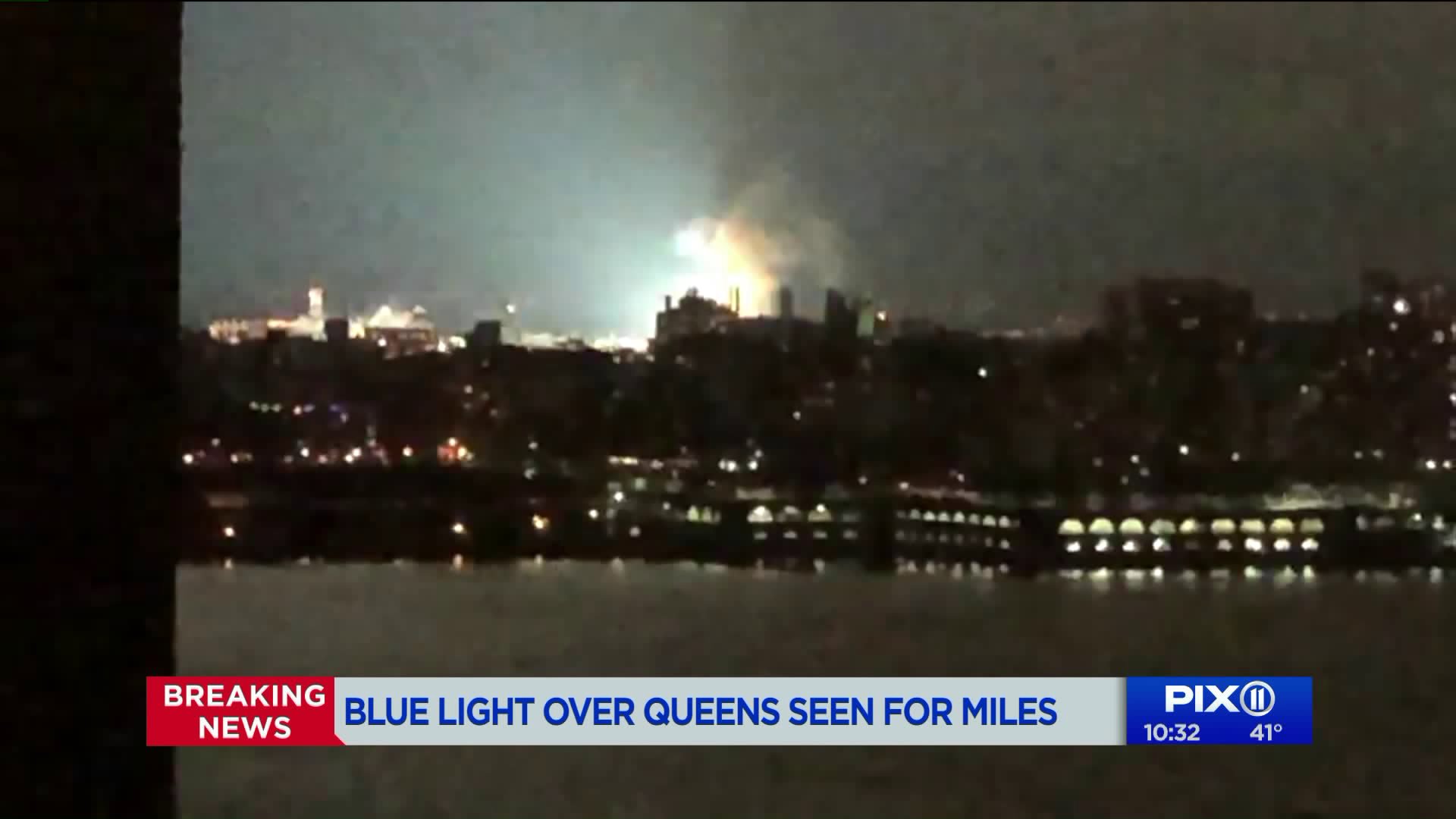 The blue lights could be seen around the city and in New Jersey around 9:15 p.m. NYPD Chief Nilda Hofmann said police were investigating a transformer explosion at Astoria East and North Queens Con Edison power plant. The fire was under control as of 9:40 p.m.Con Edison said an electrical fire caused a transmission dip in the area. It is investigating the cause of the incident. 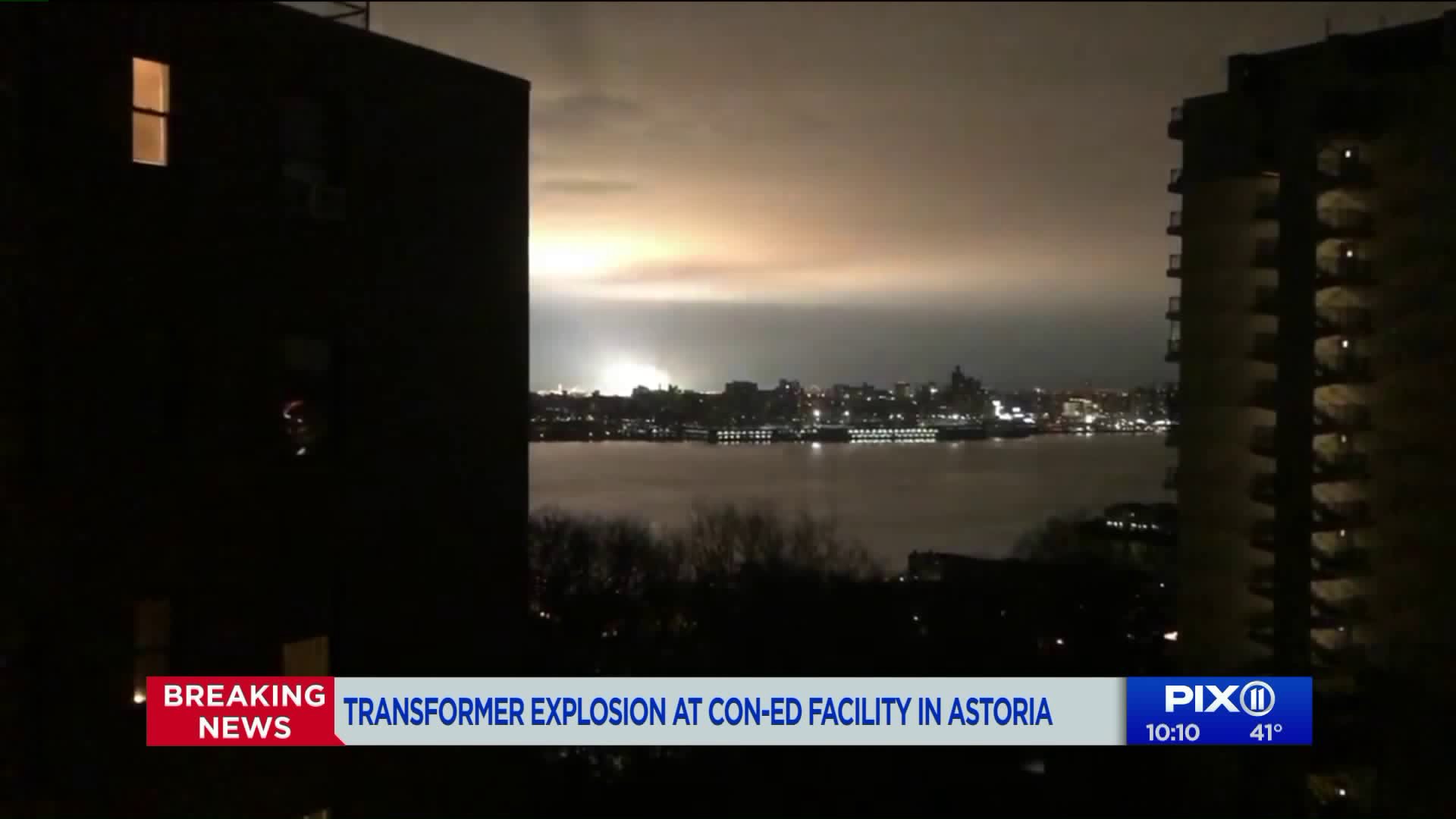 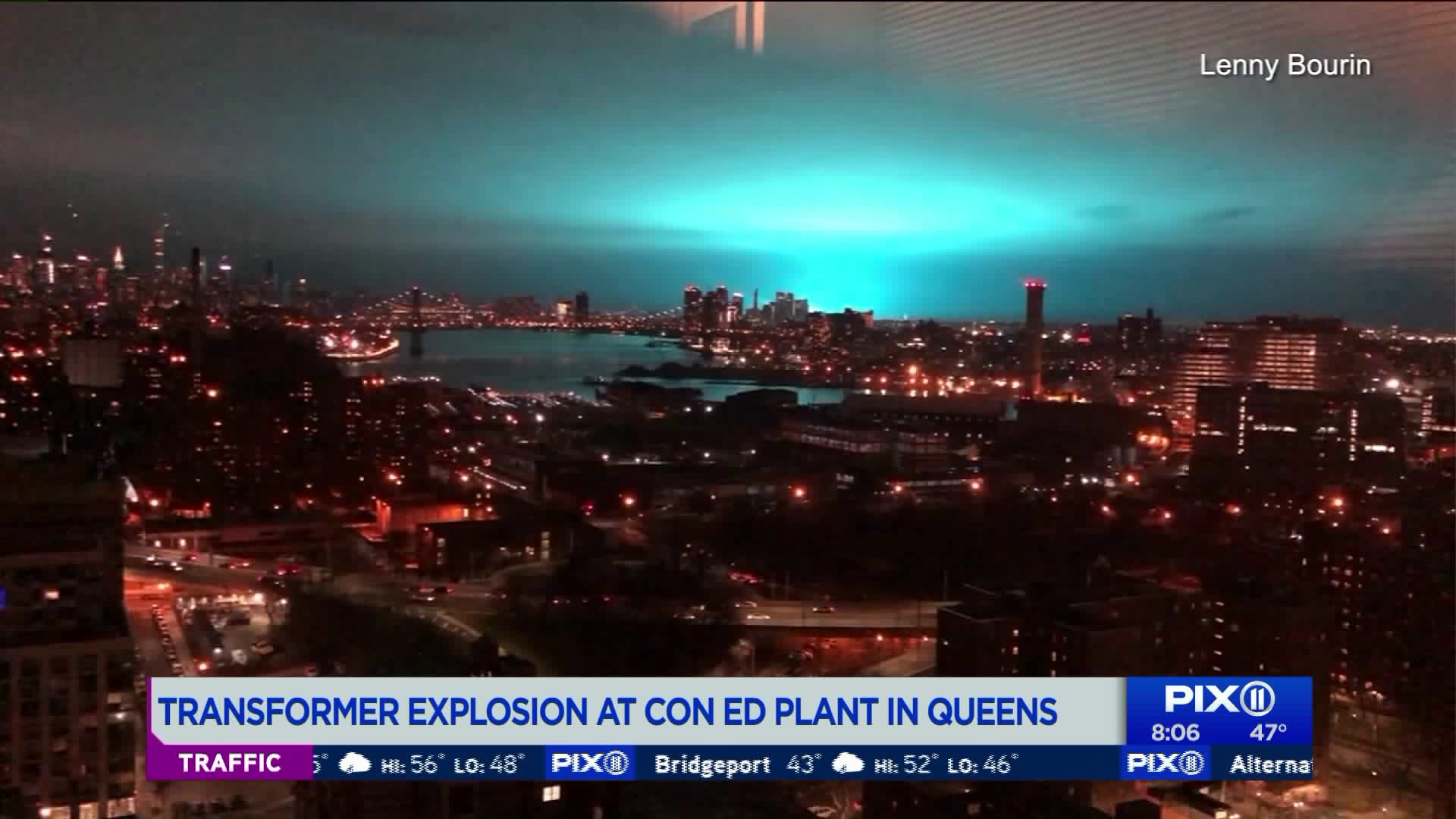 The blue lights could be seen around the city and in New Jersey around 9:15 p.m. NYPD Chief Nilda Hofmann said police were investigating a fire at Astoria East and North Queens Con Edison power plant. The fire was under control as of 9:40 p.m. Con Edison said an electrical fire caused a transmission dip in the area. It is investigating the cause of the incident.

"The NYPD and the FDNY are on scene at a Con Ed facility in Astoria where an apparent transformer explosion just lit up the sky over the city," Mayor Bill de Blasio tweeted. "As soon as we have more information, we will share it."

His chief spokesman added it was "*not* aliens."

"Last night at 9:12 p.m., an electrical fault on a section of 138,000-volt equipment in one of our Astoria substations caused a transmission disturbance and a sustained electrical arc flash, creating the blue light people witnessed. The equipment that malfunctioned is associated with voltage monitoring within the substation. There were no serious injuries, although one employee at the substation reported eye irritation associated with the arc flash."

"The transmission disturbance caused lights to flicker throughout much of our service area, and several facilities, including LaGuardia Airport, Rikers Island and some area hospitals, reported that their electrical systems switched to backup generation during the event. They were back on Con Edison power late last night. Service on the subway system’s 7 line in Queens was also impacted for about 30 minutes while track equipment was reset. Some other customer electrical equipment also shut off and had to be reset."

"We apologize for the disruption to customers and will continue to investigate the root cause of the incident."

While Con Ed initially described a "brief electrical fire" at a power substation in Queens, spokesman Bob McGee says Friday that what happened was what's called an "arc flash" — somewhat like a bolt of lightning — after a malfunction in equipment that carries 138,000 volts of electricity 20 feet up in the air.

No injuries have been reported, according to the FDNY, but the department has received multiple calls of people with no power in the Astoria and Long Island City area.

"Earlier this evening, a major electrical failure occurred at a Con Ed substation in Queens. Fortunately, it appears no one was injured in the incident, and I commend first responders for their swift response. There is no active fire at this time.

"While portions of LaGuardia Airport were temporarily closed due to power outages, full power has been restored and the airport is resuming normal operations with some diversions and cancellations. Additionally, power issues on the 7 Train have been resolved and the line is running local service. There are no other significant reported power outages at this time.

"State Police and staff of the Public Service Commission stand ready to support local authorities as they respond to this incident. We will take all necessary action to ensure the safety and security of the community."

LaGuardia Airport was temporarily closed due to a power outage resulting from the incident, New York City Council Speaker Corey Johnson said. Many, but not all, flights were departing from the airport Thursday night.

The MTA also reported issues on the No. 7 train because of the outages. Service was impacted until around 10:25 p.m. between Woodside - 74th St. and Main Street. The MTA had to check system signals to ensure there were no power issues or surges.

New Yorkers had been advised to avoid the area  20th Avenue and 31 Street in Queens, and to expect a heavy presence of emergency personnel in the area.

"There was this HUGE blue light in the sky and it was making this wild electricity noise," one person tweeted. "What was THAT?!!?!"

Another person suggested New Yorkers might now have super powers.

"I’m tight cause I KNOW someone just got superpowers from that blue light."

I’m tight cause I KNOW someone just got superpowers from that blue light. #bluelight #nyc. pic.twitter.com/NwGXmuTAoJ