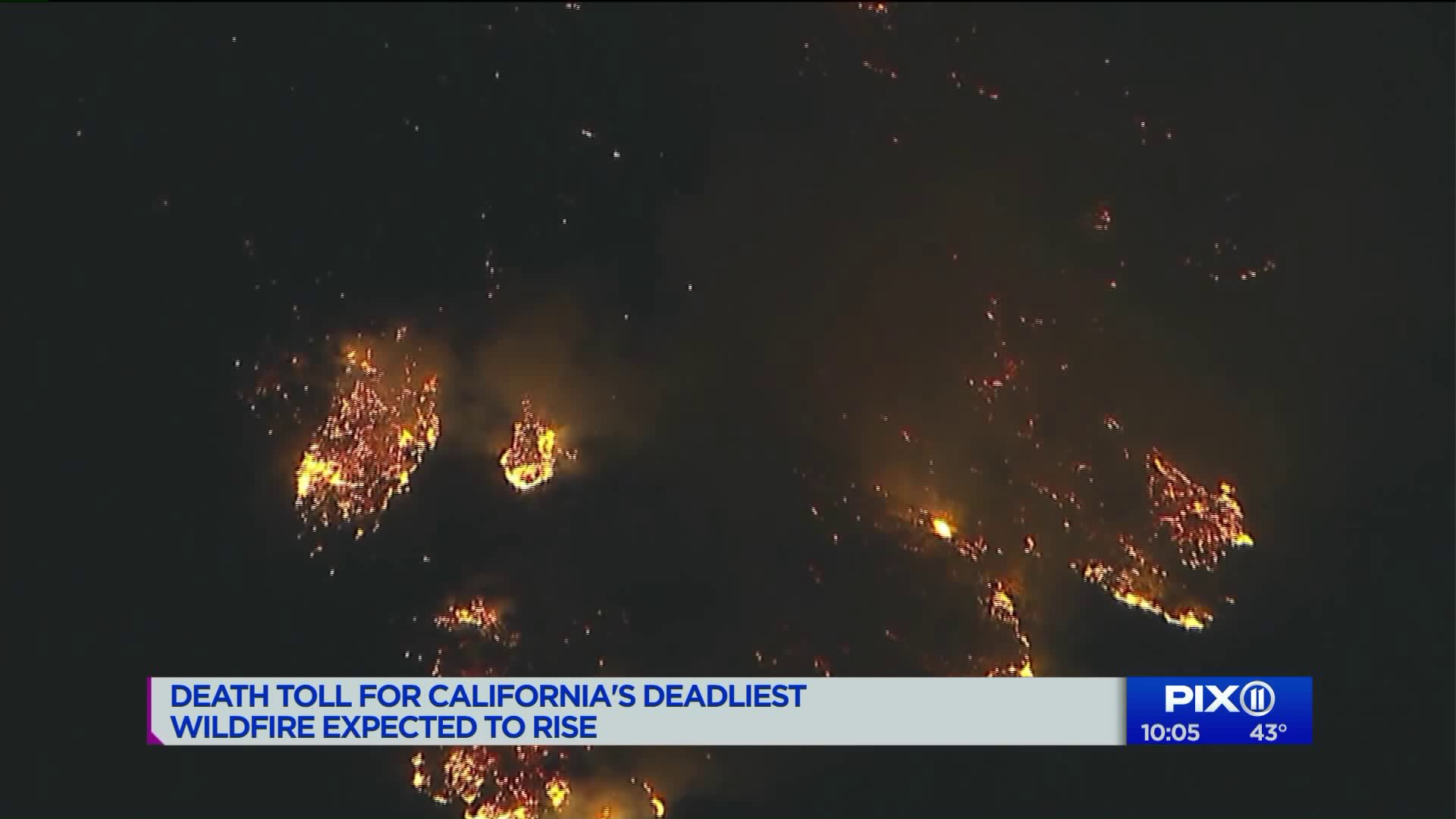 The flames all but obliterated the Northern California town of Paradise, population 27,000, and ravaged surrounding areas last Thursday. About 7,700 homes were destroyed.

PARADISE, Calif.  — Ernest Foss was a musician who gave lessons out of his home when he lived in San Francisco, where an amplifier that ran the length of a wall served as the family's living room couch. Carl Wiley refurbished tires for Michelin. Jesus Fernandez, known as "Zeus," was described as a loving father and loyal friend.

They were among the first victims identified in the aftermath of the deadliest, most destructive wildfire in California history, an inferno blamed for at least 48 deaths, with authorities ramping up the search Tuesday for still more souls.

The flames all but obliterated the Northern California town of Paradise, population 27,000, and ravaged surrounding areas last Thursday. About 7,700 homes were destroyed.

The exact number of missing was unclear, but many friends and relatives of those living in the fire zone said they hadn't heard from loved ones. Some went to shelters looking for the missing.

Efforts were underway to bring in mobile morgues, cadaver dogs, a rapid DNA analysis system for identifying victims, and an additional 150 search-and-rescue personnel on top of 13 teams already looking for remains — a grim indication that the death toll would almost surely rise.

James Wiley said sheriff's deputies informed him that his father, Carl, was among the dead, but the younger Wiley hadn't been able to leave his property in the fire area to see for himself. The elder Wiley, 77, was a tire-recapper, and the family lived in Alaska for many years before moving to Butte County decades ago.

James Wiley said his father was a stoic veteran, and the two had not spoken in six years. "Hey, I lost him a long time ago," the younger man said.

Foss, 63, moved to Paradise eight years ago because the high cost of living pushed him out of the San Francisco Bay Area, according to his daughter, Angela Loo. He had swollen limbs and couldn't walk. He had also been on oxygen.

Loo told KTVU-TV in Oakland that her father taught music out of their home in San Francisco and turned the living room into a studio.

"I love that he shared his gift of music with me and so many others during his lifetime," she said. "He would want to be remembered for being a San Franciscan through and through."

Myrna Pascua, whose husband was best friends with the man known as "Zeus," called him a "tireless provider, a dependable and loyal friend, a considerate neighbor, and loving father. He will be sorely missed by all who knew him."

Five days after the blaze, over 1,000 people were at more than a half-dozen shelters set up for evacuees. At the Neighborhood Church in Chico, counselors, chaplains and nursing students from California State University, Chico, were available to help.

Volunteers cooked meals, and there was a large bulletin board with information about missing people.

Eddie Lazarom, who fled Paradise on foot before getting a lift from a UPS truck, was among those staying at the church. He said he had yet to hear from his three grandchildren, ages 22, 24 and 28.

"I am really worried about them. They have common sense, I'm sure, but I'd hate to find out later that they burned up," he said.

Greg Gibson came to the shelter for information about his neighbors. He doesn't know if they tried to leave or not but says the fire exploded so quickly that if they hesitated, they would have had trouble.

"It happened so fast. I would have been such an easy decision to stay, but it was the wrong choice," Gibson said.

The search for the dead was drawing on portable devices that can identify someone's genetic material in a couple of hours, rather than days or weeks.

"In many circumstances, without rapid DNA technology, it's just such a lengthy process," says Frank DePaolo, a deputy commissioner of the New York City medical examiners' office, which has been at the forefront of the science of identifying human remains since 9/11 and is exploring how it might use a rapid DNA device.

Still, experts said Tuesday that authorities may first try more traditional methods of identification such as examining dental records. That's in part because victims might have undergone dental X-rays but not personal DNA profiles. Medical records of bone fractures, prosthetics or implants can also be helpful.

Before the Paradise tragedy, the deadliest single fire on record in California was a 1933 blaze in Griffith Park in Los Angeles that killed 29.

At the other end of the state, firefighters made progress against a massive blaze that has killed two people in star-studded Malibu and destroyed well over 400 structures in Southern California .

The flames roared to life again in a mountainous wilderness area Tuesday, sending up a huge plume of smoke near the community of Lake Sherwood. Still, firefighters made gains. The number of people evacuated was down by about half from the day before, to around 100,000, authorities said, and the fire was partially contained.

Gov. Jerry Brown said California is "pretty well maxed out" from fighting several deadly wildfires, and he expressed gratitude for help from surrounding states and the federal government. He said the state is doing everything possible to prevent fires, but "some things only God can do."

Interior Secretary Ryan Zinke said he canceled a trip to Asia and will visit the fire zones Wednesday and Thursday.

The fire in Northern California charred at least 195 square miles (505 square kilometers), but officials said crews were able to keep it from advancing toward Oroville, a town of about 19,000 people.

The state recently completed a $1.1 billion reconstruction project at the Oroville Dam — the nation's tallest at 770 feet (235 meters) — and officials worried about damage if flames came through. Spillways at the dam crumbled during heavy rains in 2017, prompting thousands to flee for fear of a catastrophic release of water.

The cause of the fires remained under investigation, but they broke out around the time and place two utilities reported equipment trouble. Gov.-elect Gavin Newsom, who takes office in January, sidestepped questions about what action should be taken against utilities if their power lines are found to be responsible.