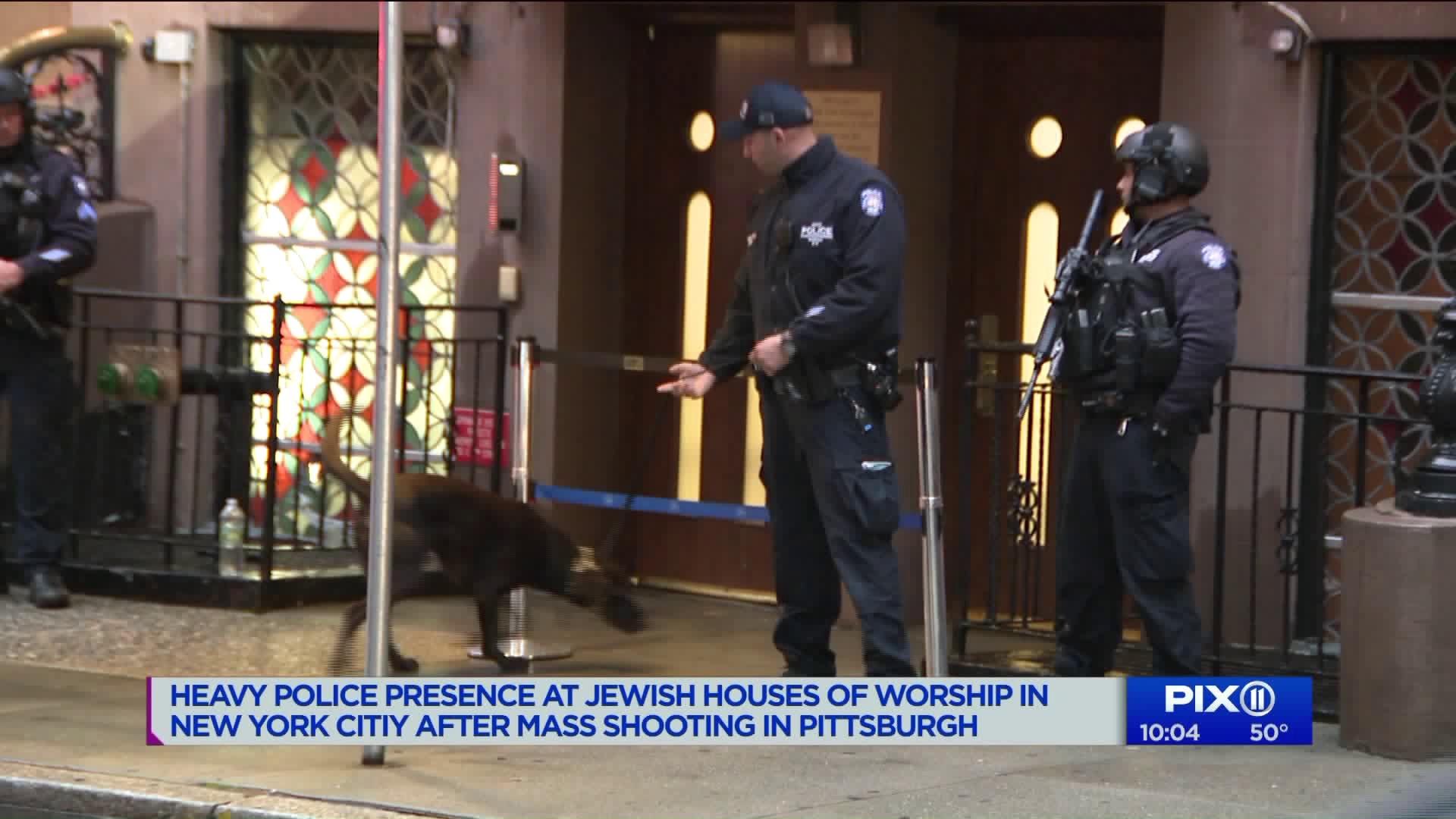 The NYPD is deploying officers to synagogues and Jewish communities following the attack at Pittsburgh Saturday morning.

NEW YORK — The NYPD is deploying officers to synagogues and Jewish communities following the attack at Pittsburgh Saturday morning.

NYC Chief of Department Terence Monahan said officers equipped with heavy weapons had been sent to houses of worship.

"In addition, NYPD officers in every precinct throughout the city are visiting sensitive locations to ensure the safety of all New Yorkers," said Monahan, who joined Mayor Bill de Blasio and other officials at a Manhattan synagogue.

"We will be having a strong presence at community institutions in the days ahead and it's important for people to know that we regard this as part of a solemn duty in this city," said de Blasio, a Democrat.

The beefed up presence will remain in place throughout the city until the NYPD deems necessary.

Authorities said 11 people were killed and six others were wounded after a gunman opened fire at the Tree of Life Congregation in Pittsburgh.

Mayor Bill de Blasio, calling anti-Semitism  "a dangerous cancer on our society” as he vows to protect the Jewish community.

NYPD is closely monitoring the situation. There will be a strong NYPD presence outside synagogues across NYC. If you see something, say something.

There will strong police presence throughout the city, as he urges the community to report any suspicious activity.

Rabbi Arthur Schneier, the senior rabbi of Park East Synagogue in Manhattan, where de Blasio spoke, recalled that as a child in Vienna he watched his synagogue burn during Kristallnacht in 1938.

"Those who burned the synagogues burned my family in Auschwitz," said Schneier, 88. He added, "In Vienna I stood by when my synagogue was burning and the police and fire didn't worry about it saving that synagogue. They were worried about neighboring buildings. So God bless all the men and women of our police, FBI and state troopers."

Schneier will be traveling to Pittsburgh with a religious delegation to show solidarity.

"I know all New Yorkers will stand with our brothers and sisters in Pittsburgh and we pray for the freedom that we enjoy in this special land, god bless the USA and god bless this city," Schneier said.

There is no current threat to New York City, but police ask everyone to remain alert.