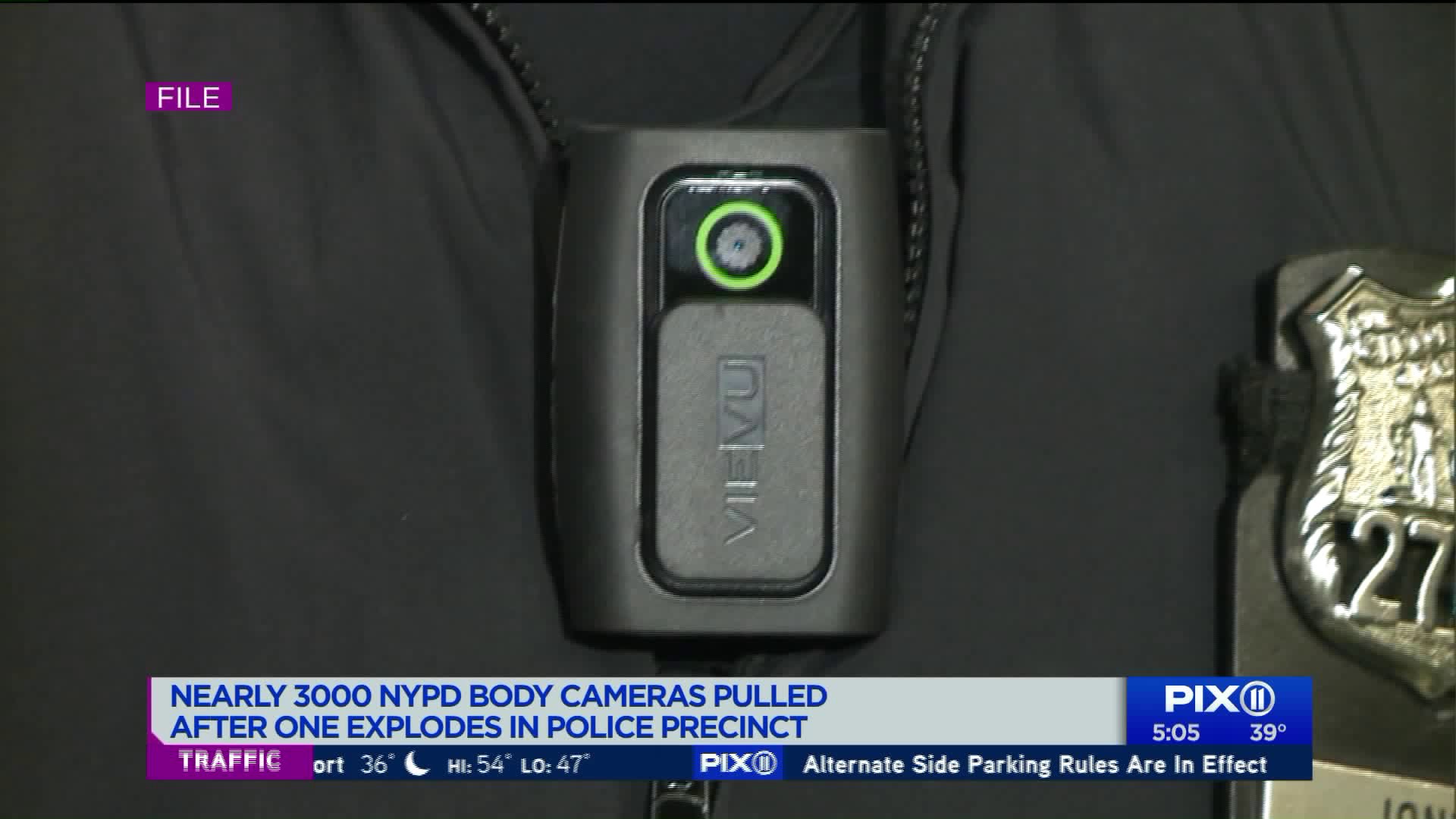 The NYPD has recalled nearly 3,000 body cameras worn by police officers on patrol after one camera exploded inside of a precinct on Staten Island. 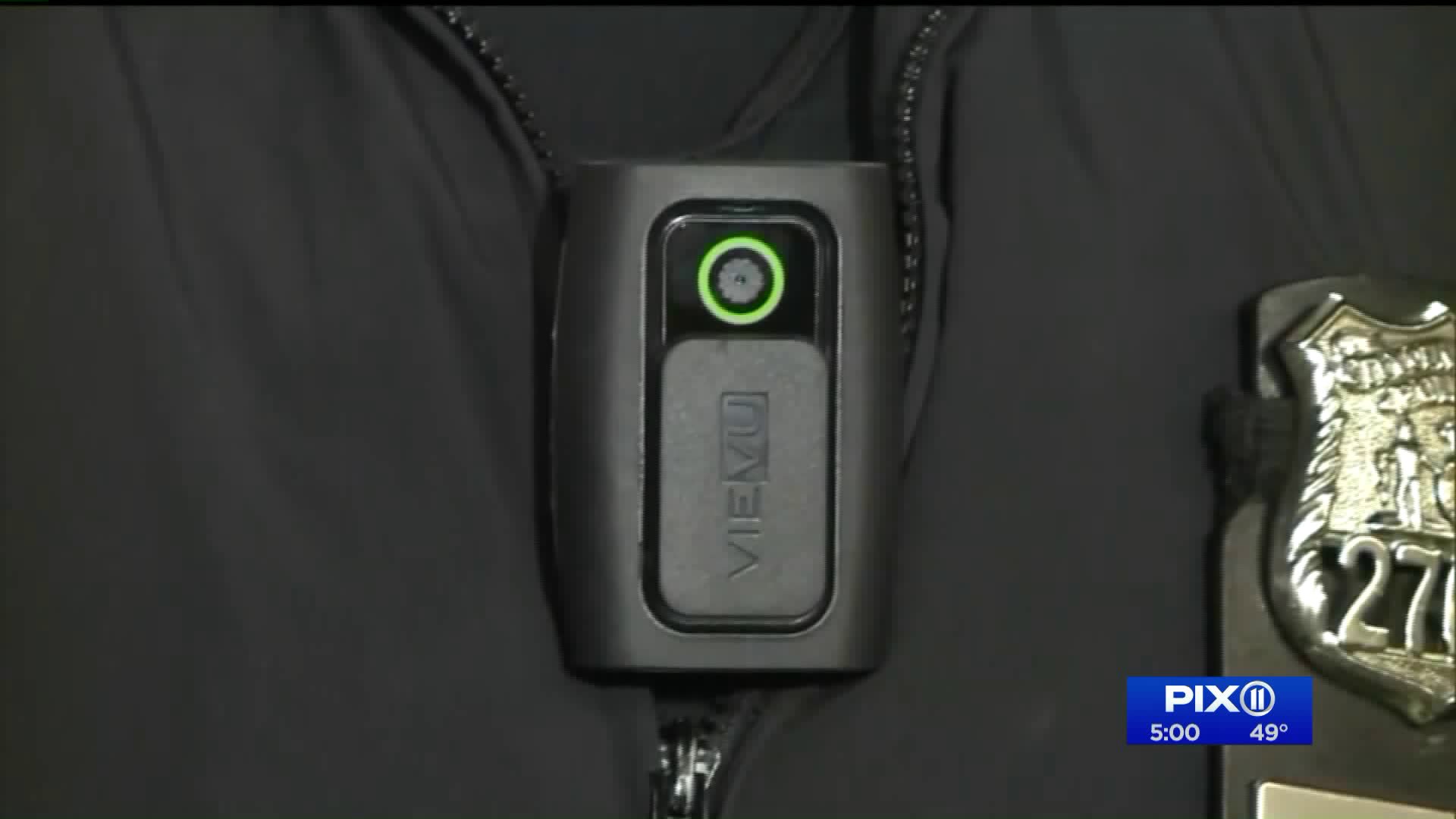 GRANITEVILLE, Staten Island — A cop on the job had to handle an explosion, but it wasn’t on the street, or in a building -- it was on his body.

The officer’s body camera overheated and exploded, and as a result the NYPD has recalled nearly 3,000 body cameras worn by police officers on patrol pending a full investigation by both the department and the manufacturer.

A Vievu model LE-5 body camera exploded over the past weekend at the 121st precinct, seconds after an officer wearing it noticed the device beginning to smoke. The officer immediately took it off, according to a release from the NYPD.

Read the statement from @NYPDDCPI regarding possible product malfunction in a portion of body cameras: https://t.co/IhVpYcXg6s

The cop had retrieved the body cam for a midnight patrol and saw the smoke exiting the bottom of the portal. Once the officer took the camera off, it exploded, police said.

As a result, the department has suspended the use and distribution of the LE-5 model cameras effective immediately, police said.

Further investigation revealed that the battery inside of the camera ignited, the department said. No injuries were reported.

“It's still a very good and safe technology,” said Jacob Sharony, PhD, an electrical engineering professor at Columbia University and principal of the wireless expert firm Mobius Consulting. He’s an expert on electronics and battery use.

In the case of the NYPD body cams, Dr. Sharony said that while the problem may very well be with the Vievu LE-5’s battery, the problem is rare.

“This flammable material [in lithium ion batteries] will start to heat up,” Sharony said. “It can go up to like 1000 [degrees] Fahrenheit.”

Nonetheless, he said, such incidents are extremely few.

“We are talking a small number, one or a few per million," he said.

Those are still odds that the NYPD does not want for cops in potentially life-threatening situations.

At a news conference on Monday, Jessica Tisch, the NYPD deputy commissioner for innovation and technology, said that an independent forensic investigator had been hired by the department, and added that “officer safety is our primary concern.”

The NYPD has also said that police officers equipped with Vievu model LE-4 body cameras are not affected by this incident, and will continue to use them as required.

A spokesperson from the body cameras parent company, Axon issued the following statement:

"We are working closely with the NYPD to investigate this issue. The officer was not injured, however officer safety is of the utmost importance to Axon. We will do whatever is necessary to quickly and safely resolve this situation. Please note we are still gathering the facts and working closely with the NYPD to understand the issue but will update you when we know more."

According to the company’s website, Axon purchased Vievu in March.