‘Proud Boys’ fight with masked antifa demonstrators has NYPD calling for arrests, and defending its response 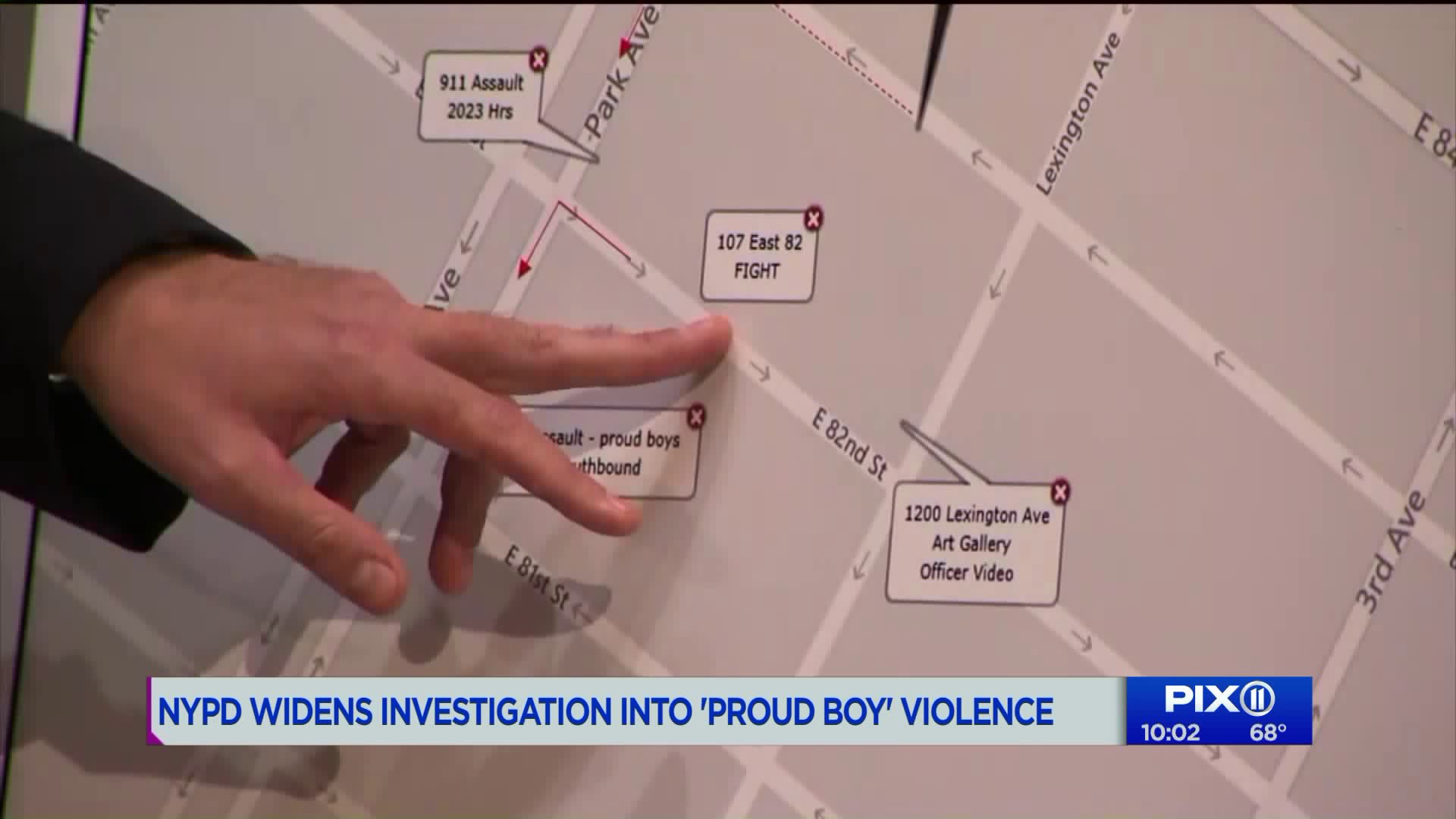 Chief of Detectives Dermot Shea said Monday that nine members of the Proud Boys group and three protesters would face charges of riot or attempted assault. Three other people are already in custody. 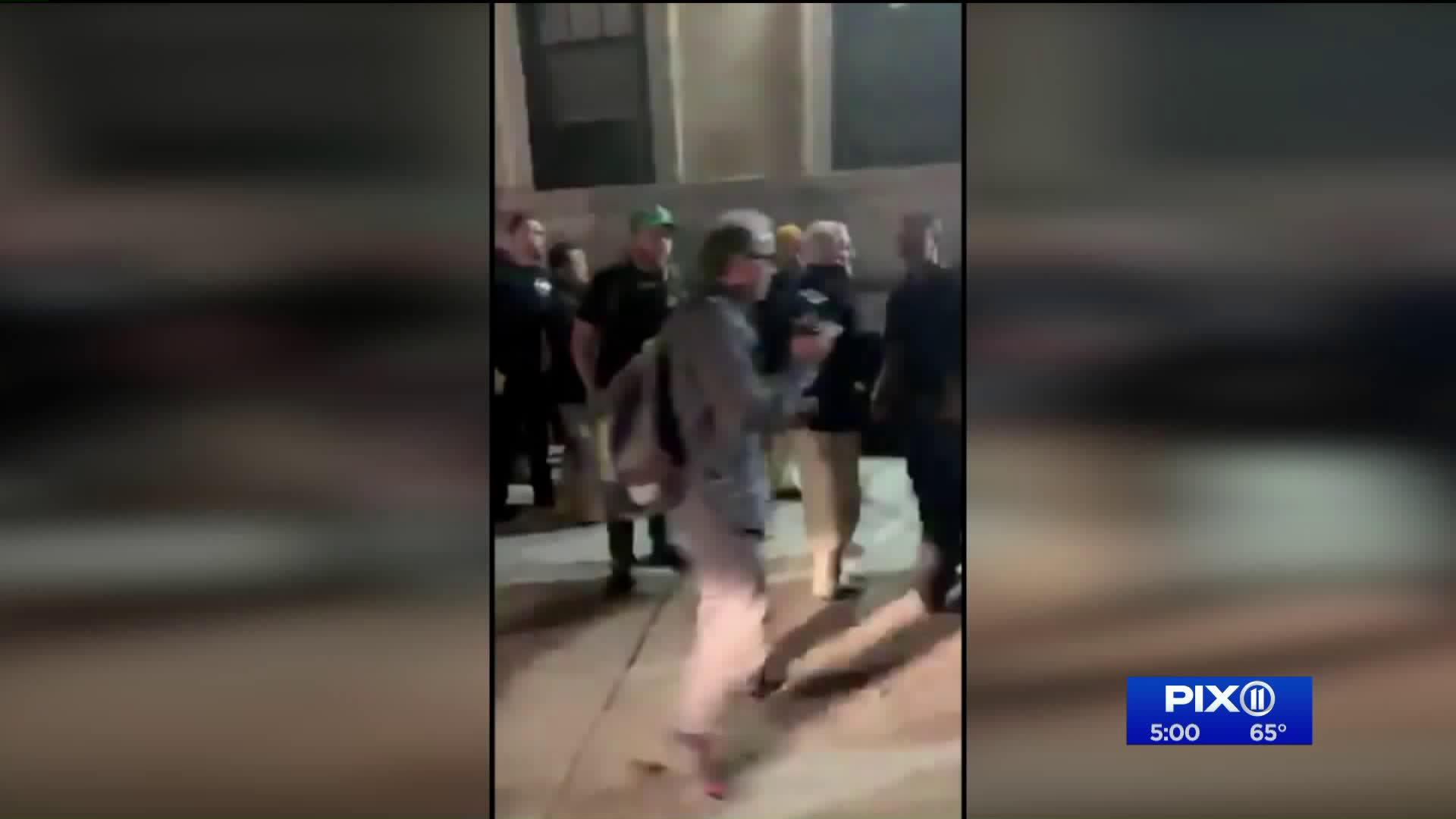 UPPER EAST SIDE, Manhattan — The NYPD released photos of 12 men on Monday who are wanted for questioning in relation to a violent clash outside of the Metropolitan Republican Club on the Upper East Side.

The altercation came after alt-right figure Gavin McInnes had spoken at the club Friday evening, and involved members of a self-described male chauvinist group called Proud Boys, as well as a masked antifascist, or antifa, protest group that condones the rejection of nonviolence in promoting its message.

The fact that it's taken three days for the department to publicly call for all of the men to be taken into custody has a variety of elected officials and community leaders calling for a review of how the NYPD handled the situation.

Officers did arrest three people immediately following the Friday night incident, but none of them was a Proud Boy member.

It all had police top brass making statements in defense of its response to the brawl, and against its instigators.

"The video images that everybody's seen are both disturbing and outrageous," said NYPD Commissioner James O'Neill at a news conference on Monday afternoon. "There's no place for that disorder -- violence and disorder -- anywhere in New York City."

Later on Monday afternoon, the NYPD's top uniformed officer, Chief of Department Terence Monahan, and its chief of detectives, Dermot Shea, held a news conference in which they explained in greater detail what had happened late last week, and what the department was trying to do about it now.

They explained that they were aware that somebody had vandalized Metropolitan Republican Club last Thursday, by spray painting anarchist symbols on the front doors of the clubhouse. Police had been called in by the club to investigate, they said.

The vandalism had occurred the night before McInnes, a founder of Vice Media, and the founder of the Proud Boys, was scheduled to speak. He has described his group as a pro-Western Civilization fraternal organization. The Southern Poverty Law Center, one of the country's most prominent civil rights watchdog groups, describes McInnes and his organization as being aligned with white supremacist and fascist groups.

McInnes had been invited to speak at the club by Ed Cox, the New York Republican Party chairman.

After McInnes spoke on Friday night, a group of a few dozen antifa demonstrators was outside of the clubhouse protesting. Also present were Proud Boys members. At some point, as seen on both eyewitness and surveillance video, punches, kicks and body blows were exchanged between members of the two groups. Some people who have seen surveillance video of the incident have suggested that it shows antifa protesters throwing a bottle at Proud Boy demonstrators.

On Friday at approx 8:23 pm there was an altercation which was widely distributed via social media on 82nd between Lexington to Park, here’s another angle of the video. We need your help identifying these individuals please contact @NYPDTips 800-577-TIPSpic.twitter.com/ndII6m0aLc

No bottle was recovered at the scene, according to Chief Monahan, who also said that everyone involved quickly dispersed.

Even though there were at least 48 officers dispatched to the area, according to Monahan, the people involved in the melee had spread out so quickly that it was "a very chaotic scene that they responded to with only three officers."

Those officers managed to arrest three protesters, all antifa members. Nobody from the Proud Boys was taken into custody then, even though video that was posted -- and later removed -- by one of their own members showed Proud Boys openly admitting to having committed crimes at the scene.

It was one of a variety of statements made by Proud Boys on video, admitting to crimes at the scene.

At the news conference on Monday afternoon, the two NYPD chiefs released photos of the men they're now seeking. Nine of them were associated with Proud Boys, according to the chiefs; three are antifa protesters, they said.

They asked that anyone who knows any of the men contact the NYPD. A call is fully confidential, they reminded the public, if they call Crime Stoppers at 800.577.TIPS (8477).