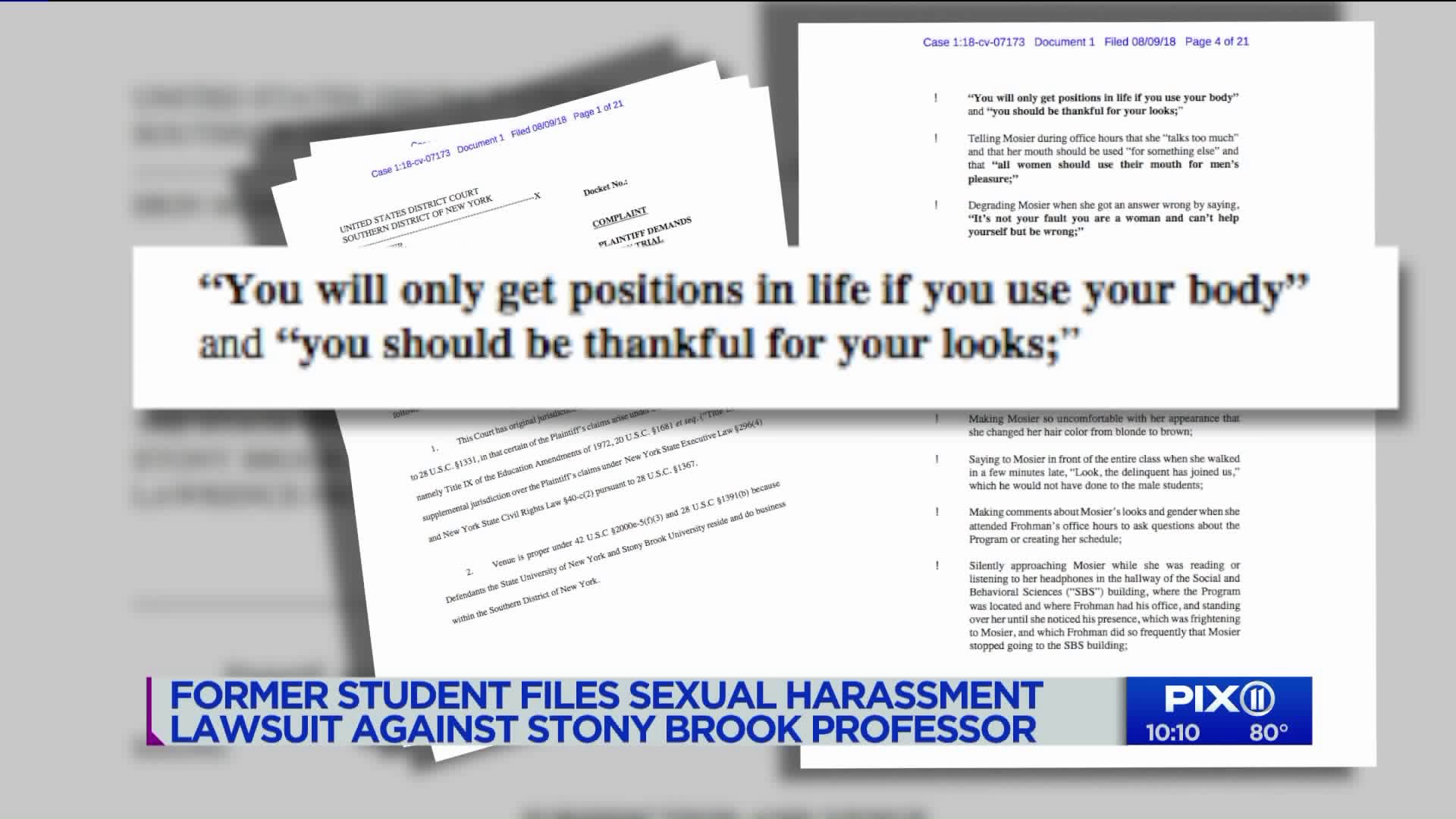 Erin Mosier, 24, is suing the University and Lawrence Frohman alleging "Frohman began a campaign of demeaning and degrading sex discrimination," "both private statements made during office hours and public humiliation during class."

STONY BROOK — A former student of SUNY Stony Brook says she was the victim of repeated sexual harassment and inappropriate behavior by a professor.

Erin Mosier, 24, is suing the university and Lawrence Frohman alleging, “Frohman began a campaign of demeaning and degrading sex discrimination,” “both private statements made during office hours and public humiliation during class.”

PIX11 obtained a copy of the complaint which also states Stony Brook “took no action to stop it and failed to adequately respond to or investigate Mosier’s complaint.”

“It was always putting me down in a negative way especially about my looks or being a woman,” Mosier tells PIX11. “Then they started turning into more sexual comments and just really inappropriate, uncomfortable comments.”

She says the remarks started within weeks of starting her first class with Frohman in the fall of 2015. He was also the advisor of the social studies secondary education teaching program she was enrolled in.

“I’m learning to be a teacher from a man who treats his students like this I couldn't sit through it anymore I had to make a change,” said Mosier. “I also wanted to make sure it didn’t happen to another female.”

Mosier says the comments became so overt, other students in class began to take notice. “There were some other students that started standing up for me or after class and said ‘did he really say that to you and is this really going on.’

The complaint states Frohman made remarks such as: “You will only get positions in life if you use your body,” “All women should use their mouth for men’s pleasure,” and “Women have no right being in the workplace.”

Mosier says when she got the courage to report Frohman, she first went to one of his direct superiors, Professor Paul Gootenberg, chair of the History Department, where Frohman was a professor.

“The second I went into his office he said to me, 'what did he do now, you’re about the 5th person in the past few weeks I have a complaint from,'” said Mosier. “He said to me was, 'what was your appearance and action in class to be treated like this?'”

Brian Heller, Mosier’s attorney, said: “This organization that prides itself on creating an inclusive education environment and providing avenues for complaint seemed completely unequipped to handle what happened to Erin to take action.”

Heller says SUNY needs to be held as much accountable as Frohman.

“Instead of taking action and doing something, [Stony Brook] really sat on it and did nothing. She struggled to complete this program, it left her dangling and completely helpless to the point where she really had to stand on her own to try to find a way to finish this program that she so desperately wanted to complete,” said Heller.

Mosier said she began to feel unsafe on campus and did what she could to avoid Mosier.

“I was always looking around; I never felt safe on campus,” said Mosier. “I would have to have friends walk me from class to class because he would sometimes follow me around. I was not healthy emotionally, physically.”

Her parents, Ed and Deirdre Mosier, also began to notice a change in their daughter.

Said Ed Mosier: “Erin is very outgoing but during the school year she was just coming home not going out and she seriously considered just dropping out."

He continued: "We did contact on-campus security to see if they could provide some security and their basic response was they couldn’t.”

The family says they think Stony Brook let them down.

Mosier said that by her senior year, she was unable to take the harassment any longer. She contacted the Department of Education to report a Title IX violation and says she still has not gotten a direct resolution.

SUNY has also not said whether they’ve taken any disciplinary action against Frohman. “There’s no clue as to if he’ll still be teaching or if any action will be taken against him,” said Heller.

PIX11  reached out to Stony Brook for a statement and the status of Frohman’s employment. Stony Brook’s media relations department directed us to the Central Communications Office for SUNY. We did that, but have not heard back.

Mosier ultimately left to finish her degree at SUNY Westbury, when school officials at Westbury allowed her to cross-register. This fall, she plans on starting her masters program at Queens College.

Right now, her attorney says there is no set amount for compensatory and monetary damages. Mosier says she is seeking something far more important, to help other young women.

“There was a point where I didn’t know how I was going to get through this but I now know that I did and I still have battles that I have to overcome because of this, but just to give other people hope who’ve gone through this that you can get through this,” said Mosier. “If I can stop this professor from hurting another female student and let her know there is a light at the end of the tunnel when you get through all this.”