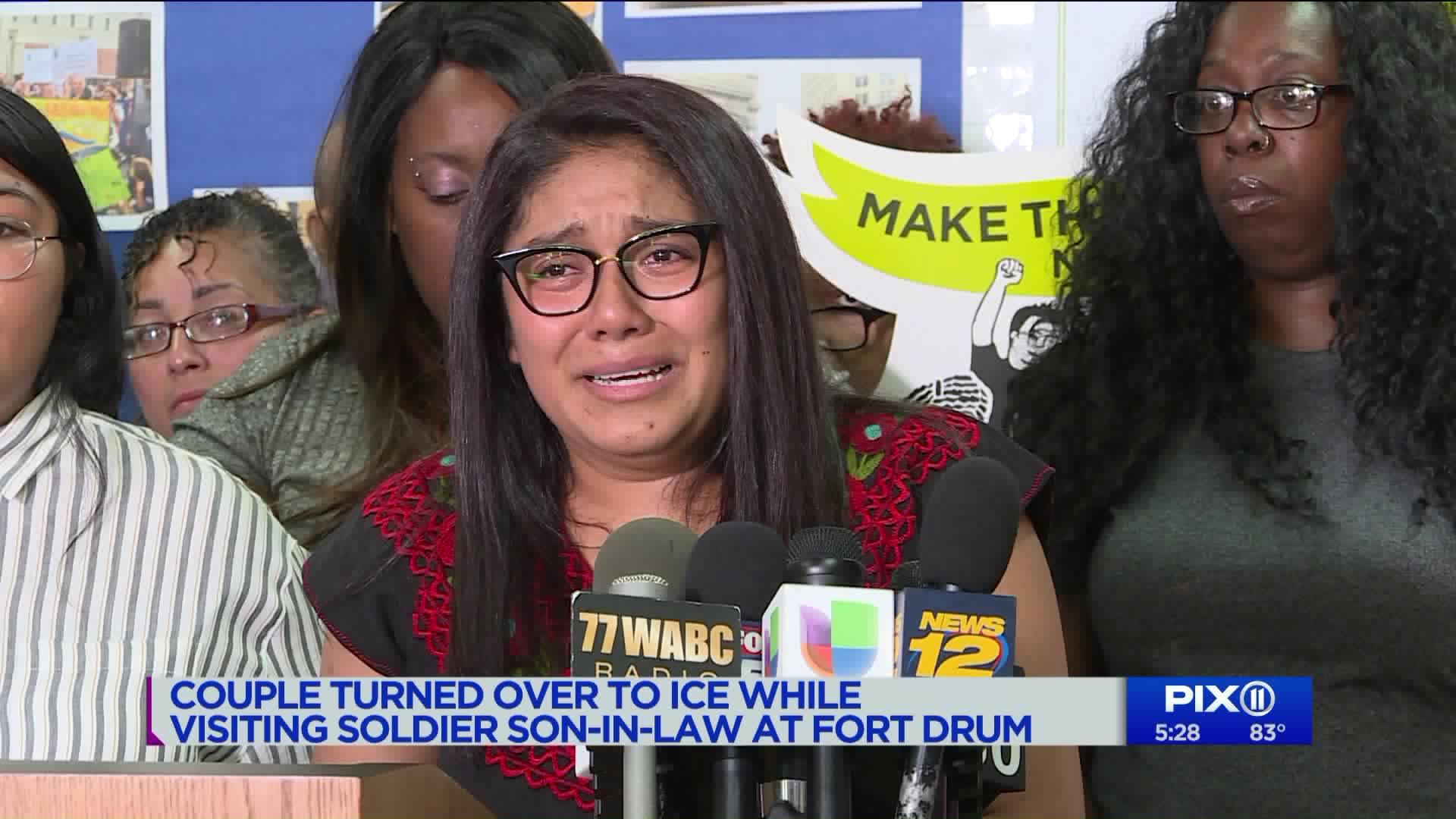 Concepcin and Margarito Silva were hoping to enjoy the Fourth of July with their daughter and son-in-law, but instead it ended in a federal detention facility.

NEW YORK — Concepción and Margarito Silva were hoping to enjoy the Fourth of July with their daughter and son-in-law at Fort Drum, an Army base in upstate New York.

But their Independence Day ended in a federal detention facility after the military base reported the grandparents, who live in Brooklyn and are originally from Mexico, to Immigration and Customs Enforcement for being in the US without proper documentation.

The detention of the Silvas -- who have no apparent criminal record and have significant health problems, their children said -- has caused outrage among immigrant rights groups who see it as another example of how the Trump administration's hardline immigration policies are harming families.

"This is yet another case of rogue ICE and CBP agents, in concert with military personnel, using all of their energy to tear apart immigrant families and put our loved ones at grave risk," said Javier H. Valdés, co-executive director of Make the Road New York, a group that supports immigrant causes.

Perla Silva, one of the couple's children, said the family is devastated.

Concepción Barrios and her husband, Margarito Silva, were detained by ICE on July 4, 2018, while visiting their son-in-law at a New York Army base. (Spectrum NY1 News/Eduardo Silva via CNN)

"We are most worried for my mother and my father, who have serious health issues," she said in a video posted by Make the Road New York. "My father ... is the only father that my daughter has ever known. She misses him dearly. Please ICE, do the right thing for me and my family. We ask for them to just come home safe."

The incident began when Concepción and Margarito Silva went to Fort Drum to visit their daughter and her husband, a sergeant in the 10th Mountain Division who has twice been deployed to Afghanistan, according to CNN affiliate Spectrum News NY1.

The Silvas attempted to enter the military base near Watertown, New York without approved identification, according to Julie Halpin, spokeswoman at Fort Drum. They presented their municipal New York City ID cards, which were not deemed sufficient, Spectrum News NY1 reported.

Security personnel found a discrepancy with their passports and then called US Border Patrol, a Customs and Border Protection spokesman said.

The CBP spokesman said the husband and wife had medications with them and were allowed to take them when needed and store them in a refrigerator.

The Silvas were taken to the nearby Wellesley Island Border Patrol station, where they received a meal prepared by their relatives because of their medical conditions, the spokesman said.

The couple were then transported to the Buffalo Federal Detention Center in Batavia, New York, and turned over to ICE Enforcement and Removal Operations to await a hearing with an immigration judge, the CBP spokesman said.

Eduardo Silva, one of the couple's children, said that his parents have been in the U.S. for about two decades and obtained a work permit from the Labor Department in 2007.

"All my dad ever does is work, work, work, work," he told NY1. "He doesn't go hang out, he doesn't do this and that, no. He just works for his family. And this is his first time trying to take a vacation, and this happens to him, and it's not fair."

He said he was primarily worried about their health issues and how this will affect them.

"She did not need this stress, and the more stress she gets, the closer for her to dying," he said through tears.

Concepción Silva had heart surgery two weeks ago, according to a GoFundMe page created by her daughter, Silva Perla.

The incident has drawn comparisons to the detention of Pablo Villavicencio, a pizza delivery man who was turned over to immigration officials after he tried to drop off food at a military base in Brooklyn, New York. The undocumented immigrant from Ecuador similarly showed his New York City ID to security and then was detained.

Villavicencio, whose wife and two daughters are US citizens, was set to be deported until a federal court temporarily blocked his deportation.

Below, activists, community members and the family of the detained family call for their release.