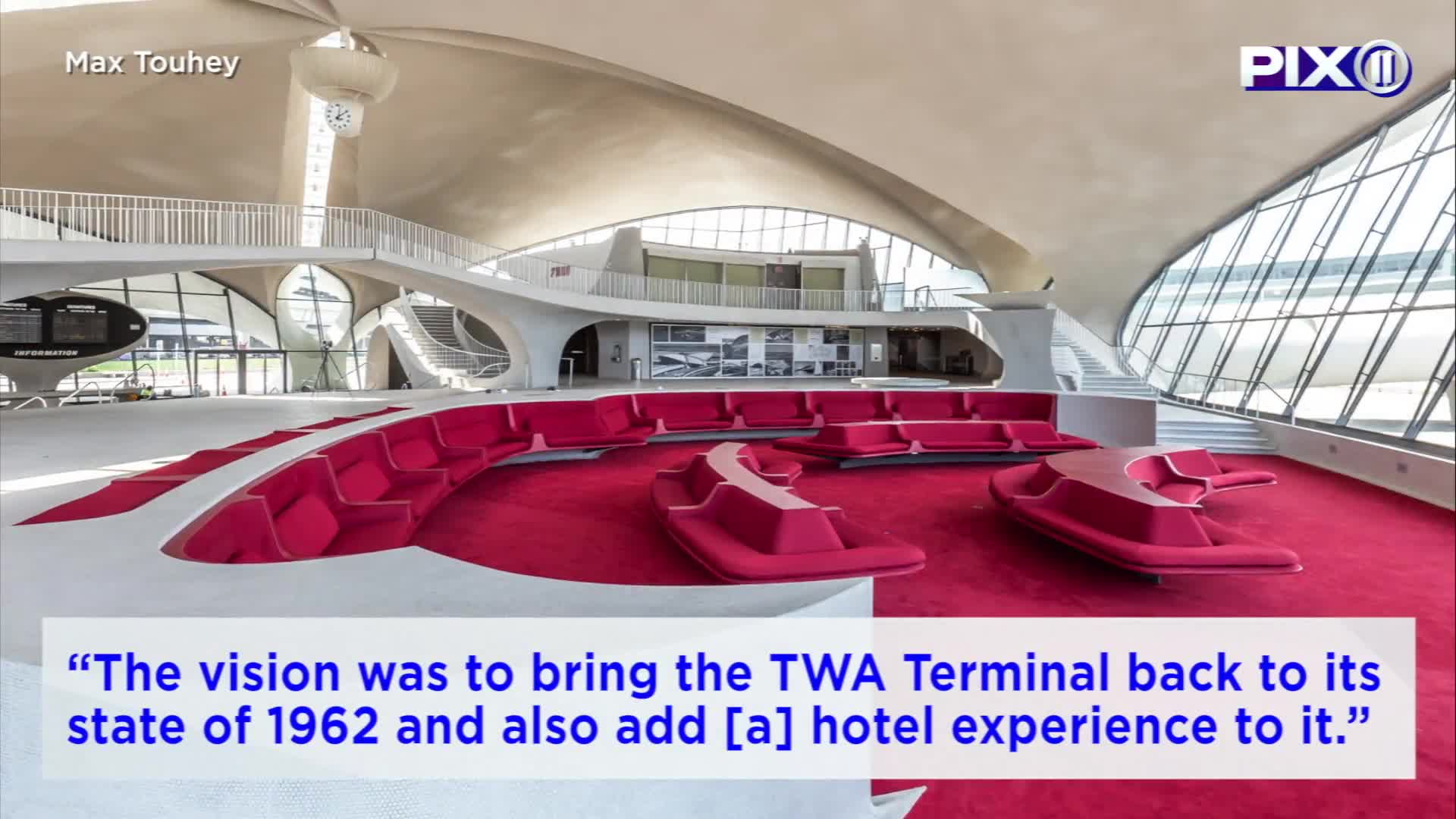 An icon of the Jet Age is poised to soar anew: The landmark TWA Flight Center at Kennedy Airport will reopen next year as the gateway to a swank new hotel that will give new wings to the TWA name. PIX11 News took a tour of a model guest room.

QUEENS — An icon of the Jet Age is poised to soar anew: The landmark TWA Flight Center at Kennedy Airport will reopen next year as the gateway to a swank new hotel that will give new wings to the TWA name.

The TWA Hotel, which is now under construction, is rising next to the original Flight Center, which is being restored to its "Mad Men" splendor.

The Flight Center has been called "one of the world’s most dramatic airline terminals," and it's easy to see why. It's famous for its stunning bird-like exterior and its cathedral-like interior, with its iconic sunken lounge with chili pepper red designer furniture, sprawling footbridge, cocktail lounges and curves at every turn.

In 1994, the building was designated a NYC Landmark. But after nearly 40 years, TWA Flight Center closed in 2001 after the airline filed for bankruptcy.

The building remained a relic of the 1960s travel heyday, with various revival plans never taking off — until now. Hotel developer MCR is transforming the landmark by refurbishing the terminal and building a brand new TWA Hotel to accompany it.

“In the '60s, travel was just starting to take off,” said Erik Palmer, the managing director at TWA Hotel who took PIX11 on a tour of the complex as well as a model hotel room. “The vision was to bring the TWA terminal back to its state of 1962…and also add [a] hotel experience to it.”

The TWA Hotel will feature over 500 guest rooms built in two new buildings that will flank the original Flight Center. There will also be 50,000 square feet of conference rooms and meeting spaces, and a rooftop pool on one of the new buildings.

Passengers looking to grab a meal will have the option of dining at  eight restaurants and six bars. MCR plans to restore the original flight center's  Lisbon Lounge and Paris Cafe, as well as add a new restaurant and lounge in a refurbished Lockheed Constellation jet parked outside of the hotel.

To give guests the sense of time travel, designers are testing hundreds of in-room products, from the glassware to the toiletries. Palmer says the company has received gifts and mementos from past TWA passengers that have been helpful to designers hoping to add the right period touches to the rooms. The hotel will also have a museum exhibit focusing on the Jet Age, TWA and the flight center's architecture.

The hotel has also been designed to ensure that jet-lagged guests will get a good night's sleep, despite the hotel's proximity to the airport's runways. Rooms will be equipped with floor-to-ceiling blackout curtains, and windows will be soundproof, as the building's curtain wall will be made of seven panes of glass.

TWA Hotel will be located between terminals 4 and 5. Passengers can transfer directly from the hotel to Terminal 5, home of JetBlue Airlines, by passing through the iconic circular tunnels.

"To be able to rebuild this landmark ... travelers from all over the world can come and celebrate what the TWA brand is all about," Palmer said.