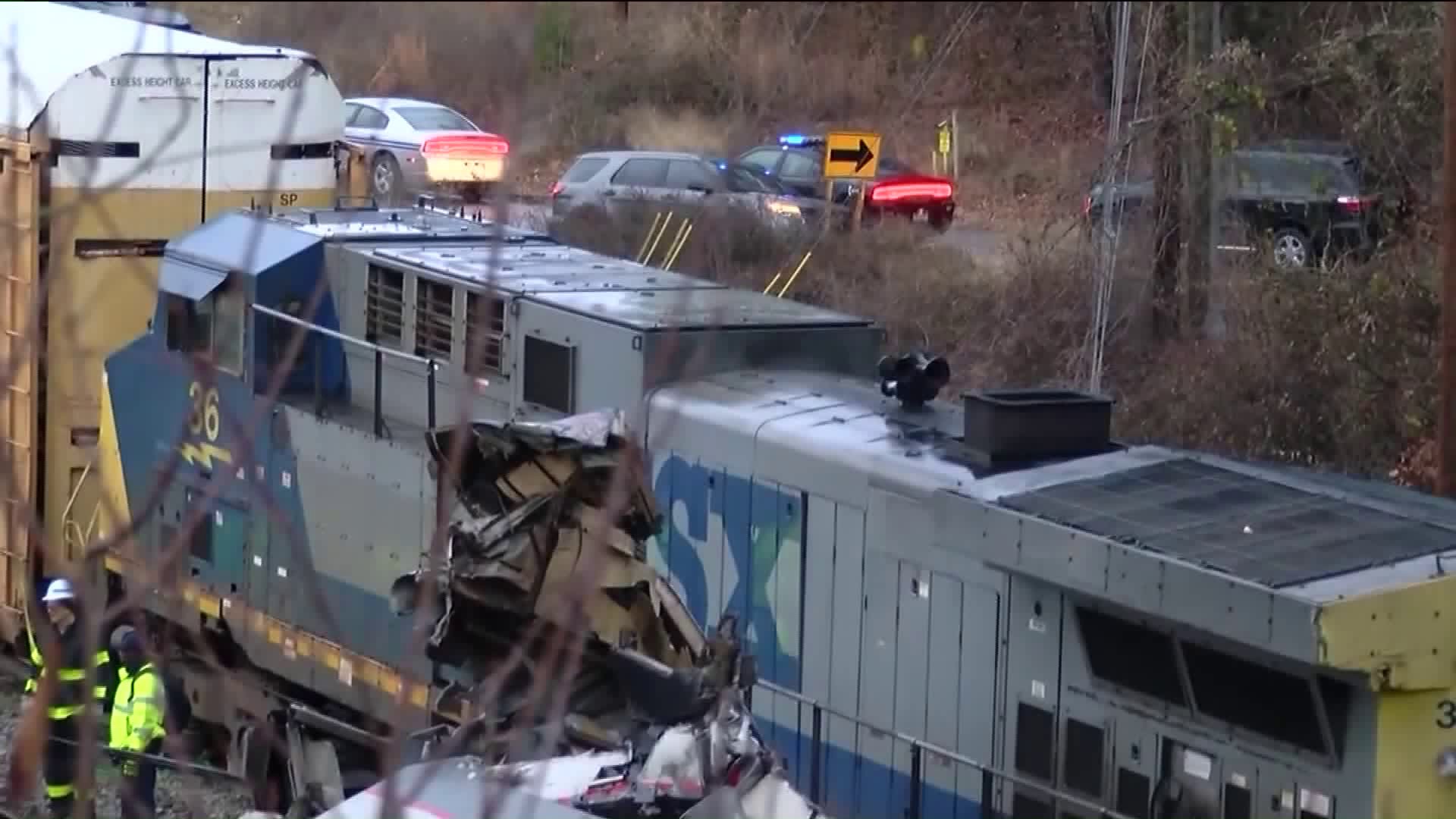 An Amtrak passenger train slammed into a freight train parked on a side track in South Carolina early Sunday, killing two Amtrak crew members and injuring more than 110 people.

CAYCE, S.C. — An Amtrak passenger train slammed into a freight train parked on a side track in South Carolina early Sunday, killing two Amtrak crew members and injuring more than 110 people, authorities said. It was the third deadly wreck involving Amtrak in less than two months.

Lexington County emergency officials respond to the scene where an Amtrak train collided with a CSX freight train in Cayce, South Carolina.

The Silver Star was on its way from New York to Miami with nearly 150 people aboard around 2:45 a.m. when it plowed into the CSX train at an estimated 59 mph, Gov. Henry McMaster said. The crash happened around a switchyard about 10 miles (16 kilometers) south of Columbia.

The governor said investigators have yet to determine how the Amtrak train ended up on that stretch of track.

"The CSX was on the track it was supposed to be on," McMaster said.

The conductor and engineer aboard the Amtrak train were killed, the coroner's office said. And 116 people were taken to four hospitals, according to the governor.

The main trauma hospital in the area had three patients in critical or serious condition, with the rest treated for minor injuries such as cuts, bruises and whiplash, said Dr. Steve Shelton, Palmetto Health director of emergency preparedness.

The locomotives of both trains were left crumpled, the Amtrak engine on its side. One car in the middle of the Amtrak train was snapped in half, forming a V off to one side of the tracks.

"It's a horrible thing to see, to understand the force involved," McMaster said after touring the scene.

Many passengers were asleep with the train began shaking violently and then slammed to a halt, passenger Derek Pettaway told CBS.

"You knew we'd hit something or we'd derailed," he said.

Elliot Smith told The State newspaper of Columbia that he was staying with a friend when they heard what sounded like a propane tank exploding.

"The sound was so loud, you instantly knew it was bad," he said. Smith said he and his friend saw passengers limping along the tracks, while others tried to get everyone out of the cars.

Amtrak officials gathered up luggage and other belongings and within hours put passengers aboard buses to their destinations. Before being sent on their way, those who were not hurt were taken to a shelter set up at a middle school, and local businesses provided coffee and breakfast.

The dead were identified as engineer Michael Kempf, 54, of Savannah, Georgia, and conductor Michael Cella, 36, of Orange Park, Florida.

Lexington County Coroner Margaret Fisher's voice caught as she released the names of the dead. "Any time you have anything that happens like that, you expect more fatalities. But God blessed us, and we only had the two," Fisher said.

On Wednesday, a chartered Amtrak train carrying Republican members of Congress to a strategy retreat slammed into a garbage truck at a crossing in rural Virginia, killing one person in the truck and injuring six others.

And on Dec. 18, an Amtrak train ran off the rails along a curve during its inaugural run on a route south of Tacoma, Washington, killing three people and injuring dozens. It was going nearly 80 mph, more than twice the speed limit.

After the latest crash, Democratic Sen. Richard Blumenthal of Connecticut said the nation's railroads must be made safer, declaring, "Business as usual must end." He said proven technology, including positive train control, cannot continue to be delayed.

Positive train control can automatically slow or stop speeding trains. Regulators have been pushing for years for such equipment, and some railroads have installed it, but the deadline has been pushed back repeatedly at the industry's request.

The worst train crash in recent South Carolina history took place in 2005 when a freight engineer parked a train on a side track near a textile mill in Graniteville and forgot to flip the switch back to the main track.

A freight train passing through went barreling down the side track and slammed into the parked train, killing nine people, most of them millworkers choked by chorine gas leaking from a damaged tanker car.