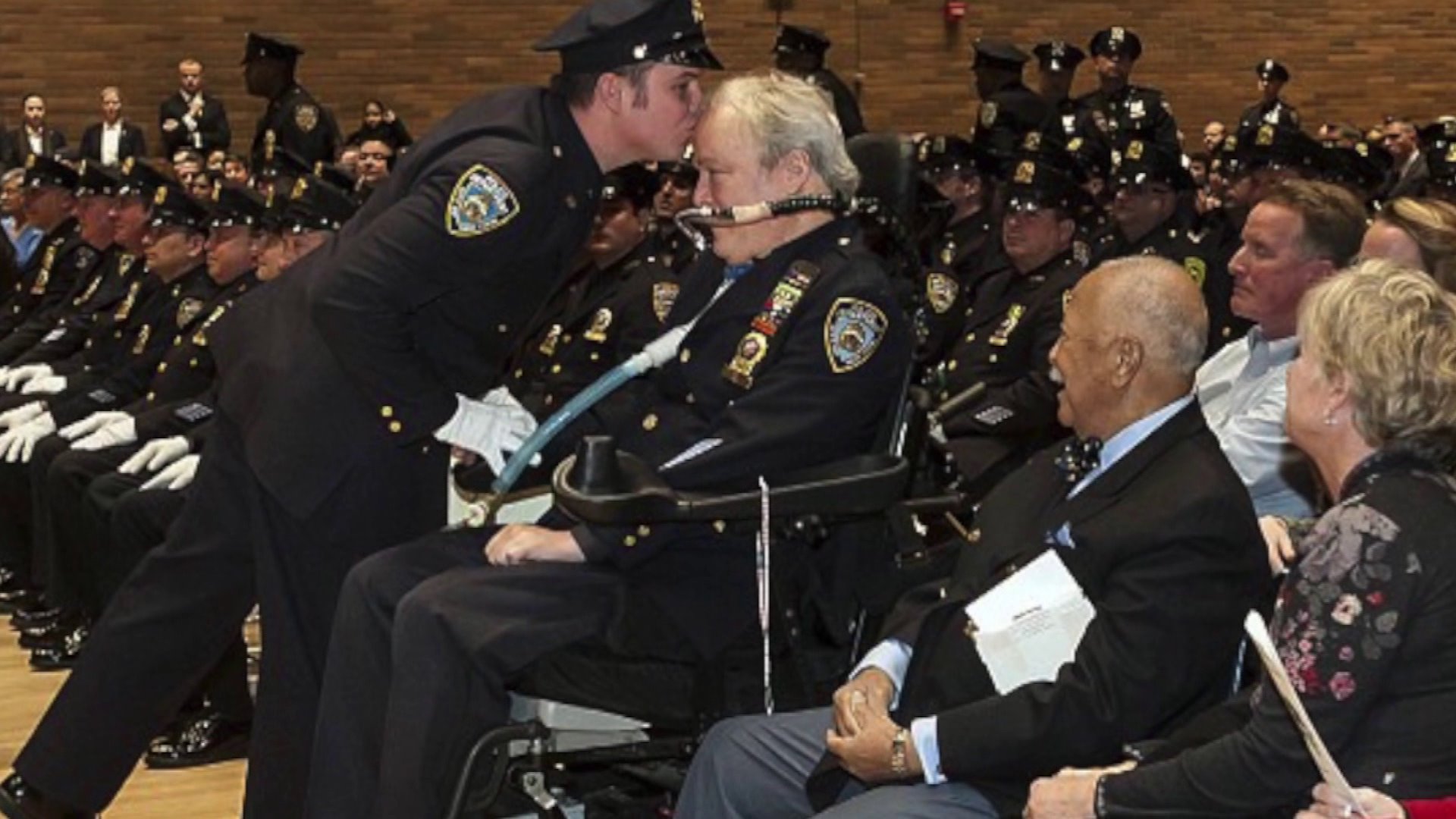 Detective Steven McDonald`s only child is set to marry as his family marks the first anniversary of his death.

MALVERNE, N.Y. — NYPD Sergeant Conor McDonald smiled when he recalled a conversation he'd had with his father shortly before his quadriplegic dad succumbed to the gunshot injuries that had left him in a wheelchair since 1986.

“He had sat me down and asked me ‘What are your intentions?’”—a reference to Conor’s long-time girlfriend, Katie Sullivan.

Detective First Grade Steven McDonald died on January 10, 2017—but Conor kept his word. Shortly after Conor took the test in August 2017, he asked Katie to marry him, and she said yes.

The couple will tie the knot in August. It’s a bright spot after a year that’s brought a roller-coaster of emotions for Conor—McDonald’s only child—and Steven’s widow, Patti Ann.

Patti Ann McDonald — the mayor of Malverne, Long Island where the family lives— was tearful as she got set to mark the one year anniversary of her husband’s passing at the age of 59.

“I know in my heart that he’s at peace,” Patti Ann McDonald told PIX11 in the living room of the family home. “And I know he’s not in pain anymore.”

For the first time, Patti Ann and Conor McDonald revealed inside details of what happened on the Friday when Steven McDonald was found unconscious in his bed.

“He had a respiratory failure,” Conor McDonald told PIX11. “It was a cataclysmic event. Something got stuck for a second.”

McDonald’s wife was in the next room, when his breathing failed.

“And no alarms went off," she said.

A nurse who checked on her husband came running to alert her. Paramedics resuscitated the detective, and life support kept him alive for four days so his father could drive from Florida to say goodbye with the rest of McDonald’s family.

Conor McDonald observed the last five years of his father’s life were difficult, with his dad in and out of hospitals.

“He was extremely tired of being in that chair,” Conor said.

When Detective McDonald was laid out in dress uniform at his wake in Rockville Centre, we and many others noticed he wasn’t attached to a respirator for the first time in more than 30 years.

His Mass card had also been “photo shopped” so the breathing device wasn’t shown in his picture.

“They eliminated the respirator,” Patti Ann McDonald recalled. “I was very upset about that, because Steven lived more than half his life on a ventilator.”

McDonald was just 29 years old and married less than a year when a suspected bike thief shot him three times in Central Park on July 12, 1986. The suspect, Shavod Jones, was 15 years old.

Officer McDonald had approached Jones and two other teens.

“He never took out his gun,” Conor McDonald said, after hearing details of the incident many times from his father.

Patti Ann McDonald told PIX11 her husband had stopped a few other suspected bicycle thieves just two weeks before the shooting and tried to counsel them.

“He said, ‘I gave them our number,” Patti Ann remembered with a laugh. “Back then, there were no cell phones. This was our house number!”

The couple, at the time, was living in a one bedroom apartment with barely any furniture. But Patti Ann said Steven McDonald told her they were fortunate compared to the people he encountered on the job.

“They called him Father Steven,” Conor said of his father’s old police colleagues.

Steven McDonald was a devout Catholic even before the shooting—helping his chaplain during his days with the U.S. Navy. He maintained a devotion to the Blessed Mother Mary until the day he died, and there’s a large painting of the Virgin Mary in the family dining room.

Many have suggested that Steven McDonald be placed on a path toward sainthood, because of his courage and the message of forgiveness he preached for thirty years from his wheelchair. Most people who are canonized saints have miracles attached to them, including the late Mother Teresa and Pope John Paul II.

Conor McDonald told us his father was part of a prayer group. One member had a great-grandchild who was non-verbal and showed no emotion.

“My dad told the gentleman to go to the chapel and pray,” Conor said, referring to Chapel of the Holy Redeemer in Freeport, Long Island.

After Steven McDonald died, the man decided to pray at the chapel, “and he saw a major change in his grandson,” according to Conor and Patti Ann McDonald.

Conor remembered his father called him to his bedroom on the last morning of his life, as Conor was leaving for work with the NYPD.

Conor did as he was told, and it was the last time he saw his father conscious.

The son shared the story of how he couldn’t hug his father the normal way, so he and his dad had their own way of showing affection since Conor was a baby.

“We’d rub our heads against each other,” Conor remembered. “Even if we used to get into fights, We’d hug it out. I’d put my head against his head, and we’d kind of tussle with each other, and I’d say ‘I love you.’”

Both Conor and Patti Ann acknowledged things were definitely not always peachy.

“The vows we took meant something,” Patti Ann told PIX11. “There were days those vows were challenged.”

But Patti Ann added through tears, “He did more for me than any able-bodied person would have been able to do. He supported me and loved me and I felt it.”

“Steven, if he hadn’t lived, and he didn’t fight, Conor would not have seen and loved his father.”

The family had an amazing journey together, meeting three popes and many world leaders.

Conor said some kids occasionally gave him a hard time, because he was in the spotlight. Conor eventually got fed up and told PIX11, “I get very detailed about what I had to experience with my father.”

The younger McDonald revealed his father suffered mightily because of the shooting he survived.

“Not being able to scratch your nose,” Conor said, as Patti Ann added, “or lying in bed, seeing a spider, and saying ‘Oh my God, I don’t want that spider to drop on me.’”

There were tougher moments.

Patti Ann said she was hoping her son would go to law school after he’d finished college in Boston and was doing volunteer work in Colorado.

Then Conor called announcing he was joining the NYPD. Patti Ann reluctantly gave her blessing.

“He really felt it was his calling to become a cop,” Conor’s mother told PIX.

On Wednesday, January 10th, 2018, a plaque will be unveiled at Detective Steven McDonald’s old precinct in Central Park, where the man called “God’s Cop” will be honored for his ultimate sacrifice: a line of duty shooting that took more than 30 years to kill him.

Sergeant Conor McDonald will be there in uniform, and then he will resume planning for his wedding, with the girl who stood by him during his darkest hour.

“I’m getting married, and maybe I’ll have kids,” Conor McDonald said. “I don’t know how I’m going to be as great as he was.”