‘America is a white nation’: racist posters in NJ get replaced by messages of inclusion 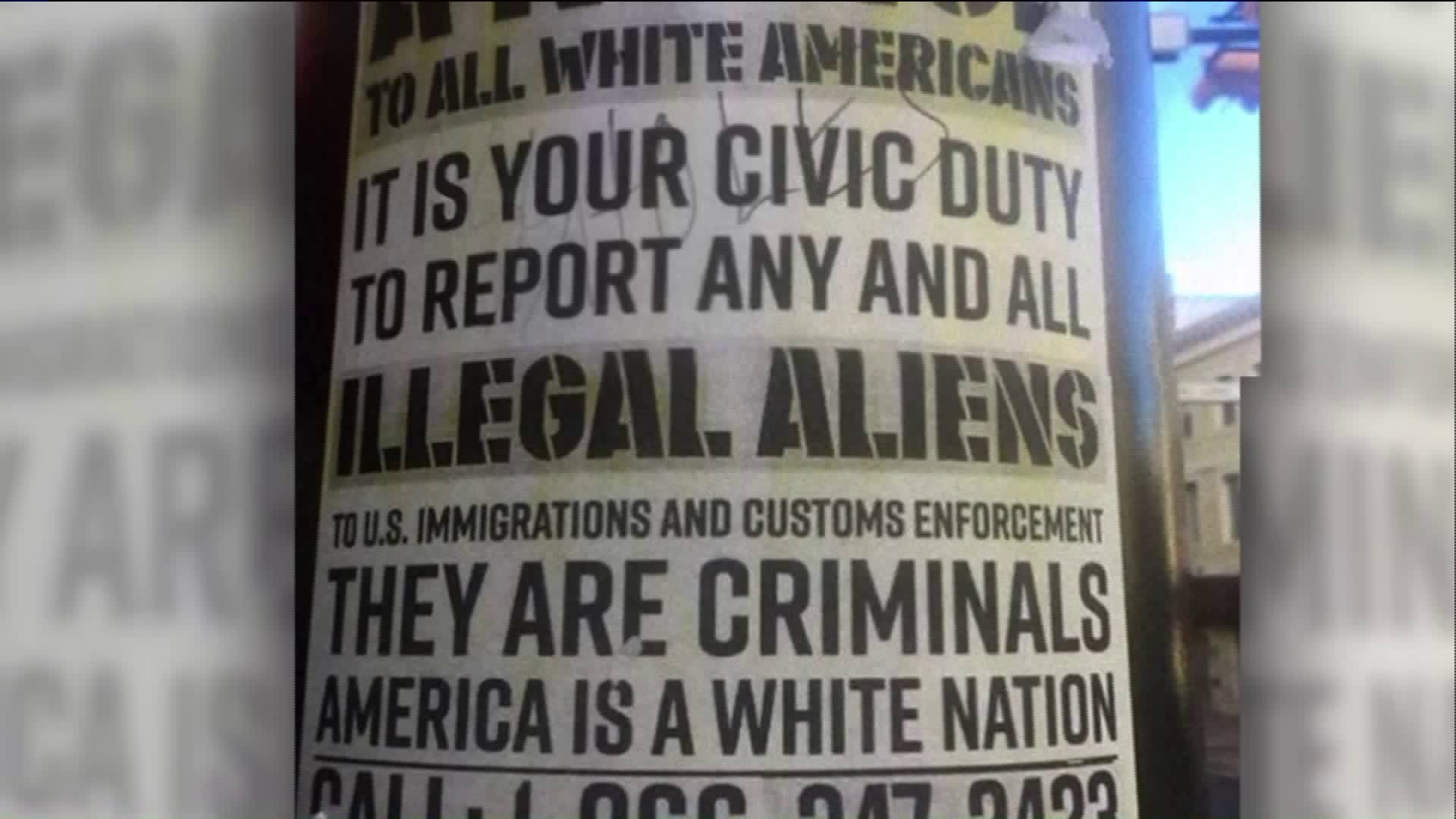 The reaction against them has been strong and swift, but it`s not the first time that publications featuring hate speech have turned up in the area in recent months. It has many residents of New Brunswick calling for a halt to it.

NEW BRUNSWICK, N.J. — Posters declaring the United States to be a white nation and urging residents to turn in their neighbors to immigration authorities, suddenly appeared this week in one of the tri-state's most diverse cities.

The reaction against them has been strong and swift, but it's not the first time that publications featuring hate speech have turned up in the area in recent months. It has many residents of New Brunswick calling for a halt to it.

The north central New Jersey city of 56,000 has a population that is one-third foreign-born. Also, along with a majority white population, New Brunswick has one of Jersey's highest percentages of Latinos, and no shortage of people of African or Asian origin. Rutgers University, which is located in town, is part of the draw that creates a diverse population here.

A wide variety of people had strong reactions when PIX11 News showed them a photo of the poster, copies of which were posted on lampposts on George Street, the city’s main retail thoroughfare, on Thursday. They were swiftly removed by city work crews.

"What the hell?" asked Robin Colarusso, as she read the poster's message: "To all white Americans: it is your civic duty to report any and all illegal aliens to U.S. Immigrations (sic) and Customs Enforcement. They are criminals. America is a white nation."

The poster also gave the phone number for ICE, but incorrectly listed the name of the organization, which is a division of the Dept. of Homeland Security. It was by no means the only thing that residents said was incorrect about the posting.

"It's just not right," said Daniel Gadzanku about the poster’s message. "That's not what this country represents," added the U.S. citizen who immigrated from Ghana.

After the posters were removed, local community groups replaced them with posters of their own, bearing the messages "No Place for White Supremacy, No Place for Oppression," and "America is an Immigrant Nation."

"It's nice to know that people have replaced it with a better message," said Melissa Russo, who works in the downtown area.

Robin Colarusso agreed. "I really like what that stands for," she told PIX11 News, "and that it says it's against hate, because that's really what we're all about."

The racist poster also listed the website bloodandsoil.org, which is run by the white supremacist group Patriot Front. By all indications, it's behind the posters that appeared on downtown New Brunswick lampposts.

It's actually the latest in a string of white supremacist posters and fliers that have gone up in New Brunswick and in nearby towns.

"Someone sent out cards to all the residents in Edison about the people that were running for seats in the government," said Jaimi Canaval, who commutes to work in New Brunswick from Edison, four miles away. "I just couldn't believe [it]," she said.

She was referring to a postcard with the message "Make Edison Great Again" emblazoned on its cover, along with photos of an Asian-American and an Indian-American candidate for school board in that nearby town. The postcard had been mailed to hundreds of voters last month. Both candidates ended up winning.

Another white supremacist group, called Identity Evropa, posted recruitment fliers and posters around the Rutgers campus earlier in the autumn.

People who live and work in New Brunswick told PIX11 News that they prefer the inclusive messages of the posters that replaced those of the white supremacist group. However, at least one person said that she would like, as a holiday gift to the city, a break from any and all posters in public spaces.

“This is not the month for it,” said Rose Sanchez, who said that she’d also attended vigils and rallies in New Brunswick against white supremacy in the past. “Everything should be at peace.”

The city government released a statement to PIX11 News regarding the white supremacist posters. “Upon learning of the presence of the flyers,” said city spokesperson Jennifer Bradshaw, “our City officials had them promptly removed from the places upon which they were posted.

“Offensive rhetoric of this sort has no place in our community,” the statement continued, “where we celebrate our diversity.”

PIX11 News also sought comment from Patriot Front, which had apparently printed and displayed the posters. However, because the group’s website requires that a person become a member of the organization in order to have contact with it,