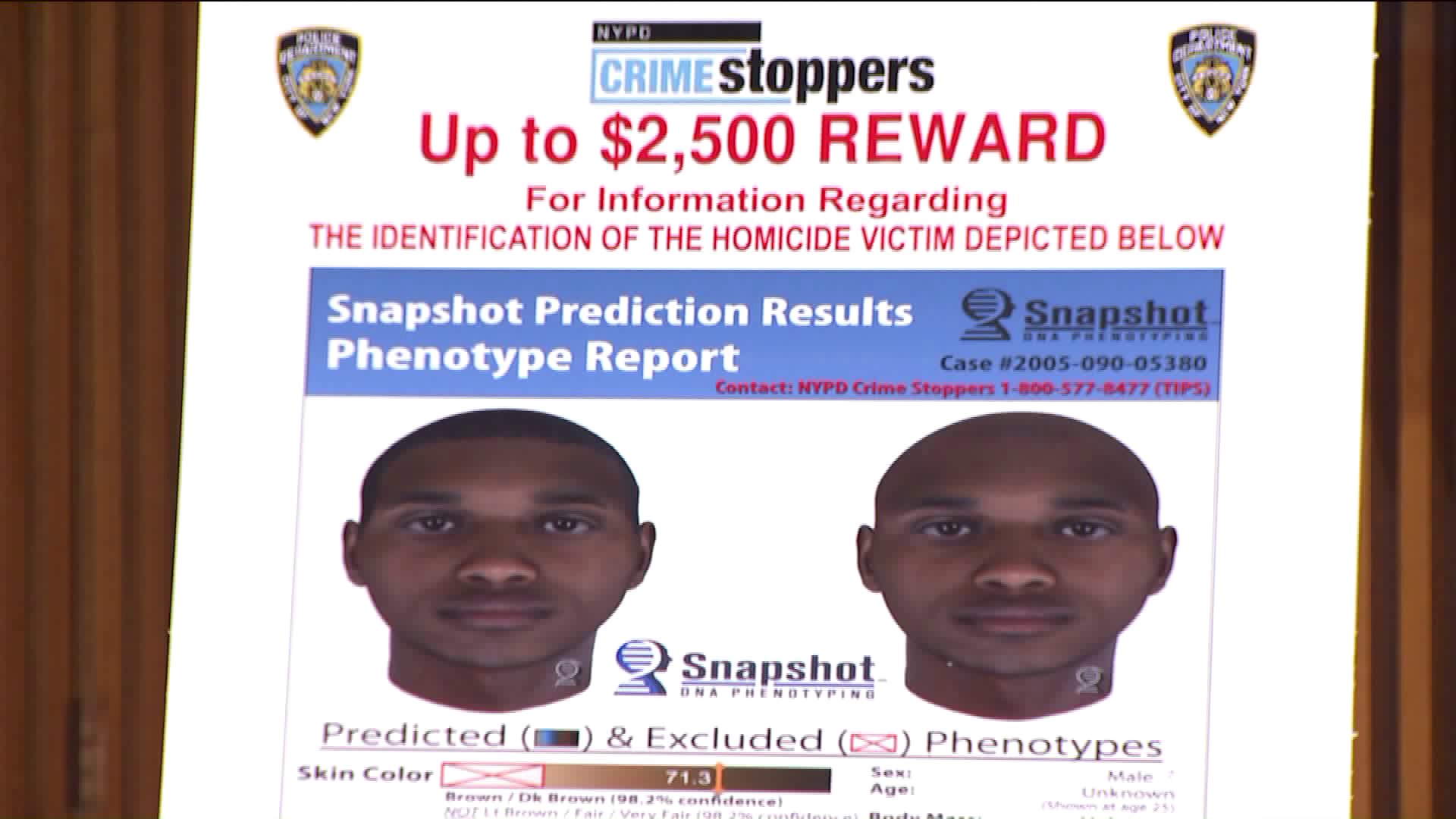 The New York City Police Department is seeking the public`s help identifying two victims from still unsolved homicides in 2005 and 2015.

BROOKLYN — The NYPD called him John Doe when his torso was found in a dumpster at a waste transfer station in Greenpoint, Brooklyn on July 26, 2005.  His head, a partial skull, was found several days later in Bedford-Stuyvesant.

“His hands were cut off. His teeth were removed,” said Lt. David Nilsen of the NYPD Cold Case Squad.

With no traditional way available to get the victim’s identity, the NYPD decided in 2017 to use a new technology called phenotyping, which takes a victim’s DNA and tries to reconstruct his/her face — and race.

“Somewhere, some family’s in pain over the loss of this young man,” NYPD Chief of Detectives Robert Boyce said.

Detectives believe the victim was African-American, between the ages of 17 and 25, with a height of 5 feet 2 inches to 5 feet 9 inches.

John Doe’s torso was deposited in a dumpster located at 128 Gates Ave. in Brooklyn. Govan used to live on Gates Avenue in 2005. The contents of the dumpster were later taken to the Cooper Transfer Facility at 222 Maspeth Ave. in Greenpoint, where an employee discovered the torso.

Five months before John Doe was found, the body parts of a teen who also lived on Gates Avenue — across the street from Govan — had been tossed in a subway tunnel in trash bags.

The victim was 19-year-old Rashawn Brazell. He had left his home on Feb. 14, 2005, bound for a job interview and then a Valentine’s Day lunch with his mother Desire.

His arm turned up at a recycling plant several days later. Desire Brazell was pained that her son’s head was never found.

“I never got to look upon him again,” Desire Brazell once cried to PIX11.

Govan was initially indicted in November 2016 for the 2004 slaying of 17 -year-old Sharabia Thomas, who lived two blocks away from him on Gates Avenue. Thomas’ body was found folded in laundry bags, dumped in an alley off Palmetto Street in February 2004.  She had disappeared on her way to high school.  Police said she’d been beaten and strangled.  DNA retrieved from under her fingernails led to a hit on a national database.

NYPD detectives arrested Kwauhuru Govan, then 38, when he was about to be released from a Florida prison last November. He had been serving time on a robbery conviction.

Govan’s arrest last fall in the slaying of 17-year-old Sharabia Thomas became possible thanks to a tip from a PIX11 News viewer, who wrote to the Mary Murphy Mystery Facebook page in May 2016.

PIX11 took the information to detectives on the Cold Case Squad.

When Govan was questioned in prison, he denied involvement in Thomas’ killing and Brazell’s dismemberment.

At a February court hearing, when he was arrested for Brazell’s murder, he had screamed to the judge, “I couldn’t even dissect a frog."

Brazell was last seen walking toward the Gates Avenue train station on Feb. 14, 2005, up the street from the apartment building where he lived with his mother.

When PIX11 reported earlier this year that detectives were investigating whether John Doe — a third victim — was tied to Govan, Desire Brazell gasped with shock.

She still didn’t know that John Doe’s torso had been thrown in a container on Gates Avenue, the block where she lived.

“He dumped another one?” she asked.

Lt. Nilsen, the commanding officer of the Cold Case Squad, worked with Deputy Chief James Luongo, chief of NYPD special investigations, to secure the services of Parabon, a company that utilizes DNA to create a profile and image of what a victim looked like.

Detectives tried to use the technique to identify a then-unknown suspect in the brutal rape and murder of Howard Beach jogger Karina Vetrano in 2016. The technique didn’t work well in that case, but investigators later found a suspect, Chanel Lewis, through an NYPD paper trail in Howard Beach.

Chief Patrick Conry, executive officer with the chief of detectives, also asked for Phenotyping to be used in the 2015 case of a young woman whose body parts were found near the waters of South Brooklyn in Calvert Fox Park.

Police recovered the victim’s hand and a foot. They later retrieved pieces of torso with a tattoo on them that spelled the name “Monique.”

Luongo and Nilsen now hope John Doe’s reconstructed face — and Monique’s — will trigger recognition from someone who knew the victims well.