The end of bail? How Pedro Hernandez’s case is causing reform 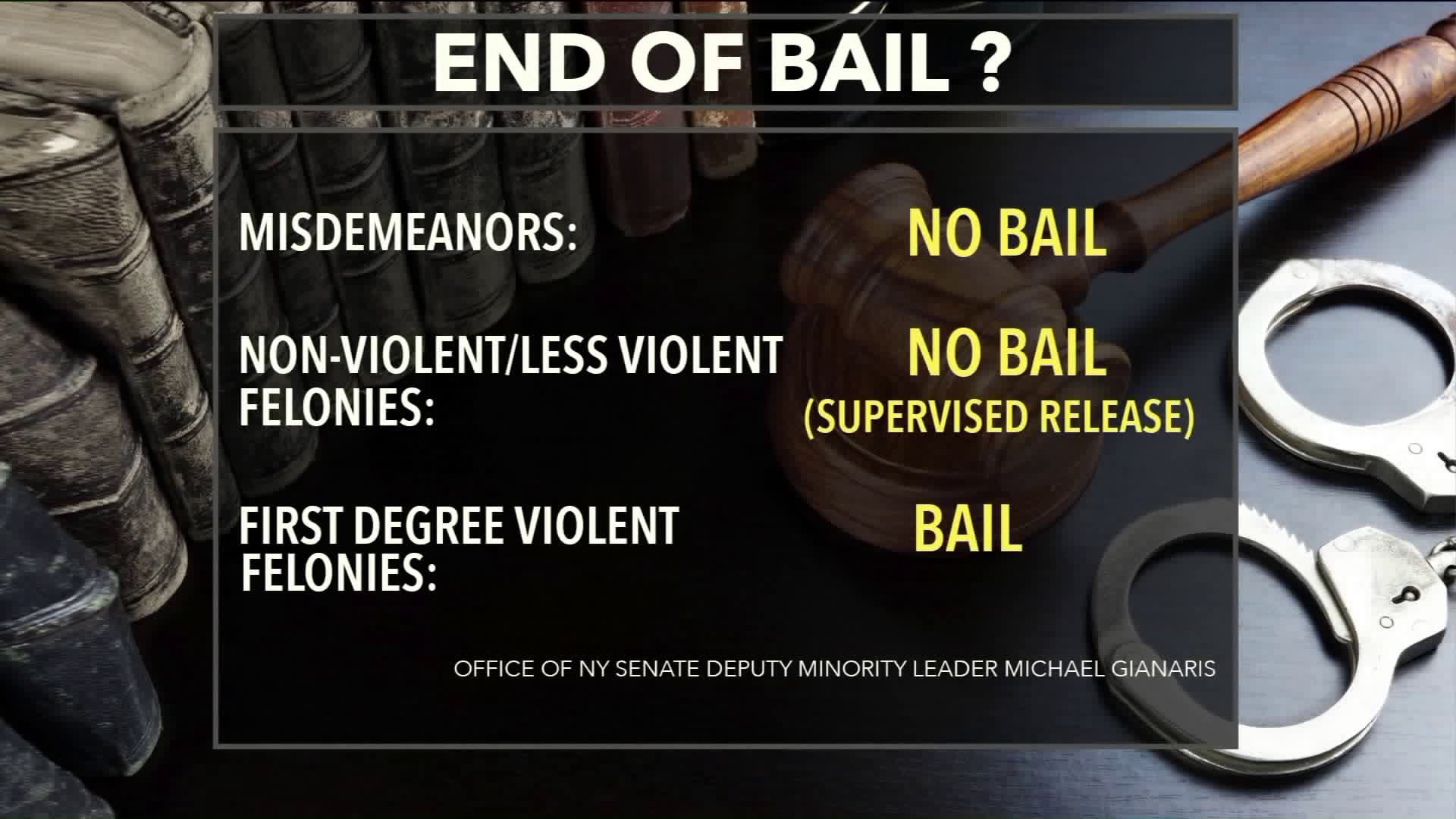 The case of Pedro Hernandez, the honor student held on Rikers Island for a year on $250,000 bail while he refused to take a plea deal in a shooting case, is now spurring a renewed call for much more lenient bail guidelines.

LONG ISLAND CITY, Queens — The case of Pedro Hernandez, the honor student held on Rikers Island for a year on $250,000 bail while he refused to take a plea deal in a shooting case, is now spurring a renewed call for much more lenient bail guidelines.

"Two people who...are accused of the same exact thing," New York Senate Deputy Minority Leader Michael Gianaris said. "One of them has money to be walking the streets, the other is there sitting at Rikers while they wait."

He's renewing a call for the state legislature to pass a bill he first introduced two years ago, which would eliminate bail being set in all but the most serious cases.

For misdemeanor cases, there would be no bail required to be paid by a defendant. In non-violent and less-violent felony cases, defendants would pay no bail, but would have supervised release.

Under the Gianaris plan, bail would be set only in cases involving the most violent crimes, such as first-degree murder.

An unscientific poll of New Yorkers showed mixed reviews for the proposal. Kayvan Aflaki lives here, but is a Canadian citizen.

"In Canada, there are much more lax bail laws," he told PIX11 News. In New York, however, he said, "When you have such large disparity and in a lot cases it tends to be in some way on a racial and an ethnic basis, what can you really do?" Aflaki asked.

"You have people who can't pay themselves out of trouble for what they're potentially being profiled for doing," he added. "I would say I'm partially in favor."

"Bail is set by a judge," Klein told PIX11 News, "and basically, whatever the judge thinks is fair in that particular instance I think should be set by that particular judge. It shouldn't be a legislative issue," he said.

However, people close to the attempted murder case Pedro Hernandez is charged with say otherwise. Investigator Manuel Gomez, who works for Hernandez's family, found that the person Hernandez is accused of shooting, Shaun Nardoni, said that he was physically threatened by two NYPD detectives and an assistant district attorney to blame Hernandez for the crime.

A similar story was repeated by another young man, Tyrese Revel, who Hernandez had also been charged with shooting. Despite repeated threats and physical abuse by the two detectives and the assistant D.A., Revel said, he resisted pinning on Hernandez the shooting that injured him, and it was ultimately dropped.

Gomez also found that the key witness in the shooting of Shaun Nardoni said that he, too, was forced by police and the same assistant D.A. to blame Hernandez.

All three have said, in video statements and in written affidavits, that Hernandez was not involved in the shootings.

That's why, Gomez said, he's joined with a legend in the criminal justice community to try and change the situation. Bail reform, said Gomez, is just the beginning.

"Frank Serpico and I have created a blueprint for a new agency called the Department of Civilian Justice," Gomez told PIX11 News. "Now that I have [State Sen. Gianaris] backing us up, we can make a change."

Frank Serpico's whistleblowing against NYPD corruption in the early 1970s reformed the department. Gomez is attempting to achieve reform on a wider scale with his proposed state agency.

For now, though, bail reform is the central issue. Whether or not Albany -- which is not known for fast action -- will end bail as we know it, is an open question at best.

However, the executive vice president of the Fortune Society, an advocacy agency for prison reform, said that bail reform is not impossible.

"We can't give up hope," said Stanley Richards, who had himself been incarcerated decades ago. "In 1986, when I was in the criminal justice system, there was 22,000 men and women incarcerated in Rikers. We now have under 9,500 people there. We are at a point in time in our lives in New York City and New York state where we can see the finish line."