His gloves hide a secret: Desperate Queens man begs PIX11 for help getting into detox for heroin 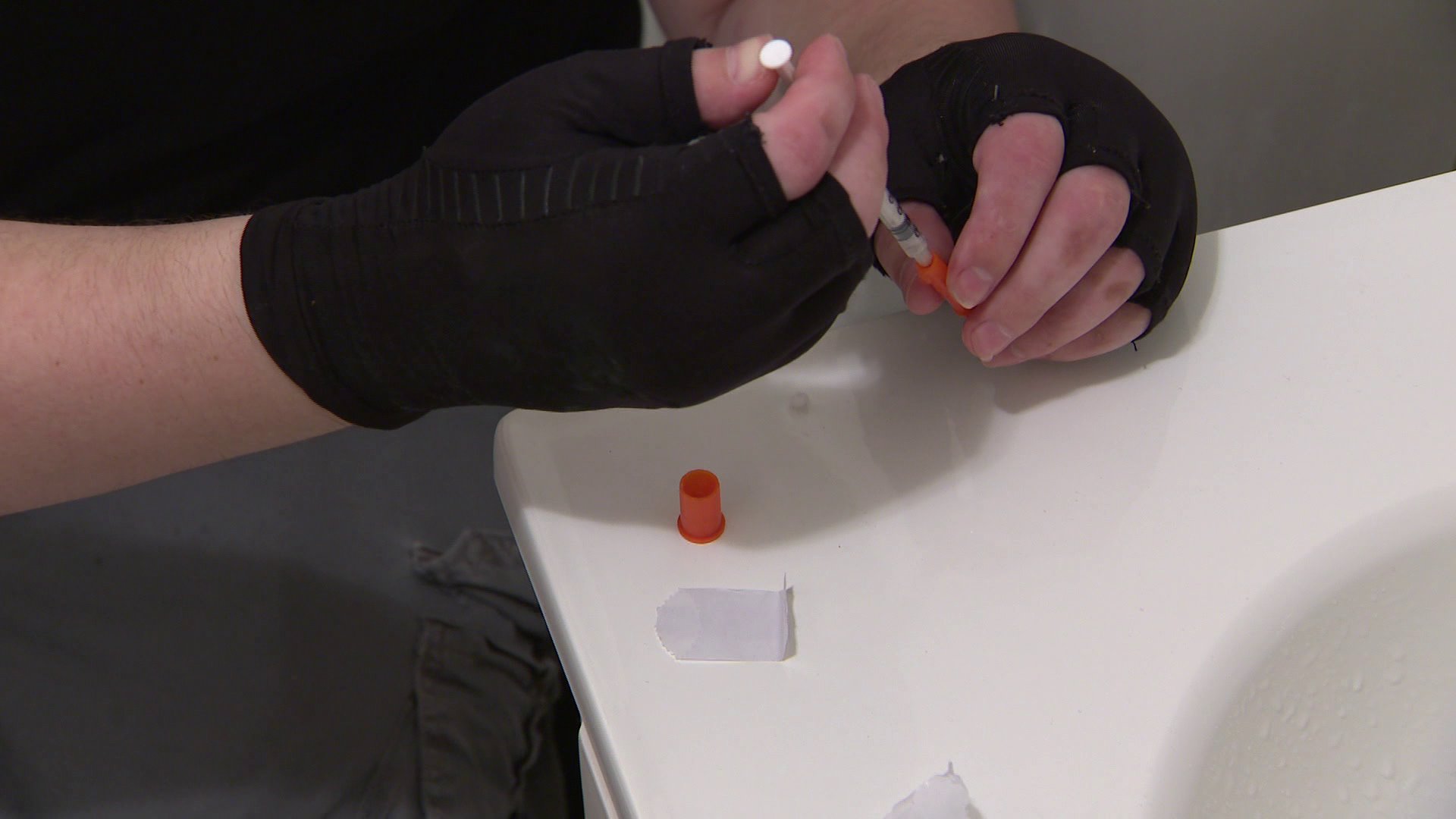 Joe knew his quality of life and his health had hit rock bottom.

QUEENS — When we met 30-year-old Joe on the stoop of his apartment building in Ridgewood, Queens, we immediately noticed his clear skin, sparkling blue eyes and beautifully cut brown hair.

Then we noticed the black gloves on his hands.

“Because I injected into my hands,” Joe told PIX11 in his living room upstairs, “and it’s given me some nasty, open wounds on my hands.”

We visited Joe after he wrote a heartbreaking email to PIX11 News asking for help getting into detox for his heroin addiction.

“When I try and quit, I get bone-shattering withdrawals,” Joe wrote. “I need help; I’m ready to stop.”

Joe lives with hisgirlfriend, a 25-year-old physical therapy assistant who doesn’t use drugs. She’s known Joe 10 years and didn’t realize he was using hardcore narcotics until a mutual friend tipped her off about four years ago.

“We would be sitting on the sofa talking, and it would almost be like he was falling asleep on me,” Joe’s girlfriend told PIX11.

Five months ago, Joe lost the small business he was running and the six-figure salary that went along with it. He had no health insurance to treat the large, black-colored scabs on both hands that were obviously infected. He had no money for a detox facility.

It’s been eight years since Joe started dabbling with painkillers in the opioid family — Percocet and Vicodin — but he was exposed to pills at a very young age by his mother.

“She literally had a suitcase full of pill bottles that she would bring with her everywhere she went,” Joe recalled. “I would see her high on the couch on pain pills, smoking a cigarette, and she would drop the cigarette and burn holes in the couch.”

Joe was the oldest of his mother’s children. He told us he has two younger brothers and several sisters.

“I would be watching my brothers. I pretty much raised my brothers,” Joe said.

Despite getting bounced around to various boys’ homes during his adolescent and teen years, Joe later got work as a union carpenter and then started his own business, designing mods for vaping.

“He used to be so motivated,” his girlfriend of 10 years told PIX11. “Very spontaneous. He always wanted to do something different -- fishing, hiking, always outdoors.”

Joe’s girlfriend said she was initially in denial about Joe using highly-addictive drugs.

“I didn’t want to believe it,” she said. “That’s when I started finding needles and, like, rubber bands.”

The rubber bands held together the bundles of heroin that Joe was buying from drug dealers -- 10 doses held together by a band. The bundles often sell for about $100 on the street. Joe had gravitated to heroin, an opioid, after the painkillers became tougher to secure because of a state crackdown.

“I was doing about five bags in a shot,” Joe recalled during the height of his heroin use. “I was probably doing two, two and a half bundles a day.”

Joe said when his girlfriend threatened to leave him, he started to wean himself off the heavy use of heroin and managed to get down to three bags a day.

Joe said without some heroin in his body, he suffers extreme withdrawal symptoms.

PIX11 photographer, John Frasse, was in the bathroom with Joe when Joe prepared a shot on Thursday afternoon. He put less than one bag of heroin into a cap and then drew the syringe to pull the heroin into the needle. Then he added water to the syringe.

A few minutes later, Joe closed the bathroom door and injected the dose into his wrist in privacy.

When Joe left the bathroom, we asked him how he was feeling.

“Much better,” he replied. “You instantly feel better.”

But Joe was well aware that death is a possibility every time he shoots up. He told PIX11 he has never overdosed.

We asked him if he was concerned about getting heroin mixed with a synthetic opioid called fentanyl, which sent overdose deaths skyrocketing in New York City in 2016. More than 1,300 people died, most of them from mixtures of heroin and fentanyl.

Joe asked PIX11 for help getting into a detox facility.

The first call we made was to Carl’s House of Recovery in Staten Island, a center named after Carl Bini, an FDNY firefighter who was killed in the Sept. 11 collapse of the Twin Towers.

Sean, who’s in recovery himself, answered the phone and told us he would call a detox facility in Brooklyn immediately. He asked for Joe to call him, and Joe did.

At 9 a.m. Friday, Joe’s girlfriend traveled with him to the Beacon of Hope detox center in Sunset Park, Brooklyn. Sean had been able to secure emergency Medicaid and a bed for Joe.

Joe carried a backpack on his shoulder, expecting a one week stay in the facility.

But when the medical personnel there saw the open wounds on both of Joe’s hands, they immediately brought him to the hospital.

He is getting IV antibiotics and going through detox at the same time. It’s suspected Joe may have gangrene, a dangerous infection.

Joe knew his quality of life — and his health — had hit rock bottom. He made his plea for help, and we are rooting for his recovery.

“I want this,” Joe had told PIX11 Thursday afternoon. “I want to be done with this.”